Why would somebody fake his death? For the insurance, Silly! And that’s why Democrats keep taking out insurance policies on Donald Trump.

Isn’t that what Peter Strzok and Lisa Page mentioned in their texts? The two plotted with others in Obama’s Department of Justice to cash in the insurance policy. That policy payoff meant deposing President Donald Trump.

Obama bragged often that Trump would never be president. But apparently the black guy forgot to pay the insurance premium, as the policies around Russian collusion and impeachment didn’t pay out. Still, Democrats continued to scheme. And the latest attempt at an “insurance policy” revolves around the Chinese Wuhan Virus.

“Let no crisis go to waste” remains the Democrats’ motto. And this so-called “pandemic” that has killed fewer people than accidents is what Democrats bet their future on.

Democrats delight in 17,000,000 people being out of work. And they love the growing number of Chinese Wuhan Virus infections. But mostly they love the deaths.

One of my friends joked that a man shot 33 times in Chicago was ruled to have been killed by the “coronavirus”.

An article on CNet warned people to get the facts about “coronavirus”. The issue is so important that every country is involved, as is social-media giant Facebook:

“Several of our third-party fact-checking partners around the world have rated content false so we are dramatically reducing its distribution and people who see this content, try to share it, or already have, are alerted that it’s false,” a Facebook spokesperson said. “This situation is fast-evolving and we will continue our outreach to global and regional health organizations to provide support and assistance.”

A reporter at Bloomberg media pointed out that if you search for “coronavirus” on Twitter, the social media site will direct you to visit the US Centers for Disease Results and Prevention website for information about the illness.

Ever heard of anybody “fact-checking” the flu?

Here’s an ad on Facebook for a company selling face masks. In the ad, the company claimed all but one member of a Los Angeles family died from COVID-19. However, the story, which used a real family’s photos, isn’t true.

Mother Sara Ancich says a professional photo her family took for their holiday card eight years ago showed up in a Facebook ad for FilterMax face masks that falsely claimed four members of the family had died from COVID-19. (Source: Chard Photo/KCAL/KCBS/CNN)

Mother Sara Ancich says a professional photo her family took for their holiday card eight years ago showed up in a Facebook ad for FilterMax face masks.

The ad claimed she and her entire family had died, except for the youngest son, after contracting COVID-19 at a church service.

“Who would have the audacity to clearly not know a family and type that they had died?” Ancich said. “It’s on the forefront of everybody’s mind in the news and everything, and how quickly it is taking lives. It could so clearly be true to people.”

FilterMax also claimed in the ad that it’s the most efficient respirator on the market and is approved by the Food and Drug Administration, but the FDA says that’s not true.

Further, what of New York? The state miraculously added 3,700 new victims of the Chinese Wuhan Virus, though none of the people who died tested positive for the disease. The New York Times tweeted:

Breaking News: New York City’s coronavirus death toll soared past 10,000 after officials added more than 3,700 people who had never tested positive for the virus but were presumed to have died of it. https://nyti.ms/34CLZ2e

Breaking News: New York City’s coronavirus death toll soared past 10,000 after officials added more than 3,700 people who had never tested positive for the virus but were presumed to have died of it. https://t.co/NXpgwwltWi

Now, let’s look at the timeline of deception on the Chinese Wuhan Virus death rate:

On Mar 5, CBS News reported that President Trump disputed the 3.4 percent death rate from the Chinese Wuhan Virus declared by the WHO Director General:

President Trump said in an interview Wednesday night that the 3.4% mortality rate for coronavirus cited by the director of the World Health Organization is a “false number,” and he also said that he thought people infected with coronavirus may get better “by sitting around and even going to work.”

However, on Thursday morning, he flatly denied that he had suggested Americans infected with coronavirus could go to work, blaming the media for misinterpreting what he said in his interview with Fox News late Wednesday.

Mr. Trump told Fox News’ Sean Hannity in a Wednesday night phone interview that he doesn’t believe the death rate from the spreading virus is as high as 3.4% — the rate stated by World Health Organization Director General Tedros Adhanom Ghebreyesus Wednesday — pointing out that many people might have mild symptoms and never report their cases and “get better, just by, you know, sitting around and even going to work.”

Look at all the headlines regarding President Trump on this subject: 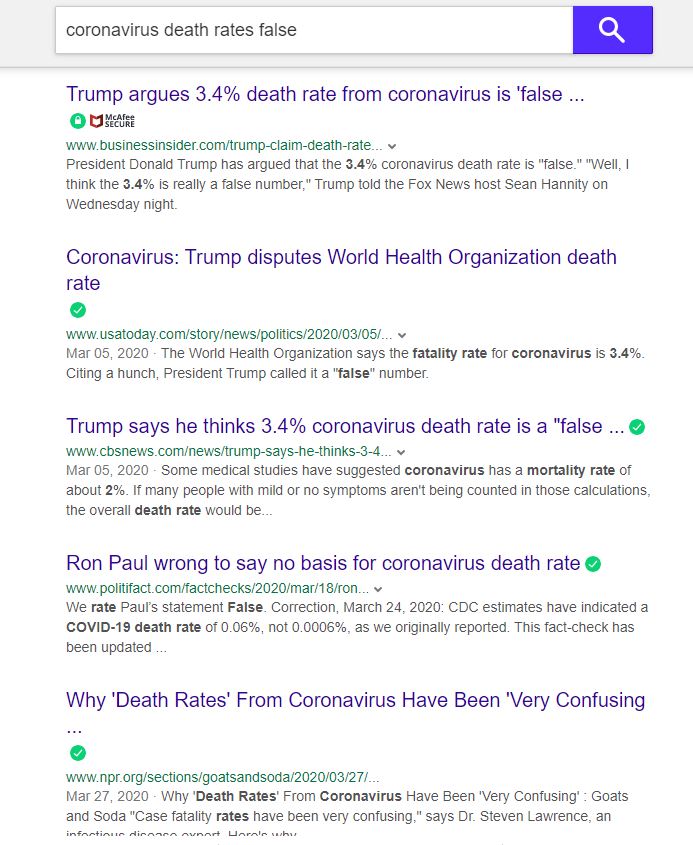 “Trump argues”, “Trump disputes”, and so on about the mortality rates. In other words, the media wanted people to believe that President Trump misled Americans.

BBC pointed out on Mar 24 that Trump was actually correct:

The UK government’s scientific advisers believe that the chances of dying from a coronavirus infection are between 0.5% and 1%.

This is lower than the rate of death among confirmed cases – which is 4% globally in WHO figures and 5% in the UK as of March 23 – because not all infections are confirmed by testing.

Stateside, NPR explained on Mar 27 why it’s all been so confusing, as well:

The coronavirus appears to be much more lethal in some countries than in others.

In Italy, about 10% of people known to be infected have died. In Iran and Spain, the case fatality rate is higher than 7%. But in South Korea and the U.S. it’s less than 1.5%. And in Germany, the figure is close to 0.5%.

The answer involves how many people are tested, the age of an infected population and factors such as whether the health care system is overwhelmed, scientists say.

“Case fatality rates have been very confusing,” says Dr. Steven Lawrence, an infectious disease expert and associate professor of medicine at Washington University School of Medicine in St. Louis. “The numbers may look different even if the actual situation is the same.”

So it’s likely that the seemingly stark difference between Germany and Italy is misleading and will diminish as scientists get more data, Lawrence says.

In other words, jumping to conclusions early by many people who wanted this pandemic caused the numbers to skew?

Less than a month from when President Trump declared the WHO stats misleading, on Mar 31 WebMD agreed with the BBC that the mortality rate of the dreaded Chinese Wuhan Virus is less than 1 percent:

Mar. 31, 2020 — The fatality rate from COVID-19 is not as high as experts have reported, according to a new analysis published Monday in The Lancet Infectious Diseases. But the infection is still much deadlier than the 2009 H1N1 flu pandemic, and the risk rises sharply with age, the researchers say.

And the rate may not hold true for other countries, which vary in how they are responding to the virus and in hospital resources.

In the new analysis, the death rate in confirmed COVID-19 cases is estimated to be 1.38%, while the overall rate, which includes estimated unconfirmed cases, is calculated at .66%.

Where is the news over the new and vastly improved death rate? Why doesn’t the media celebrate that the virus they claimed would kill us all actually has a lower death rate than a seasonal flu?

I Googled “coronavirus mortality rate” on April 15, and here are the results: 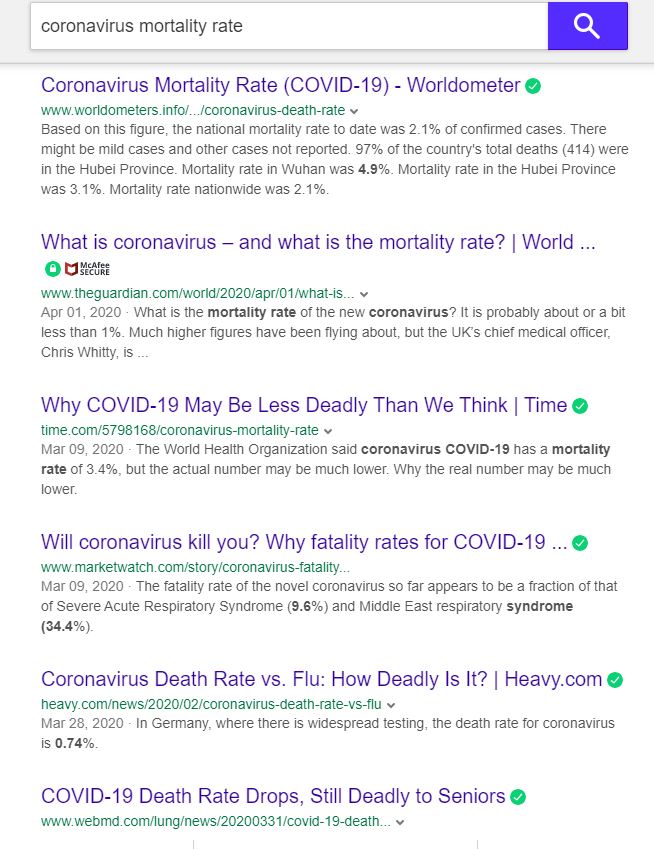 Two articles from Mar 9 that suggested the mortality rates were lower. And NO articles on the front page of Google from any mainstream media outlets.

For over a month the fake news media continued to whip Americans into panic mode. And over a virus that we now know kills less than 1 percent of the people who contract it.

Note the WebMD article from Mar 31 confirmed the death rate drop, but warned: “still deadly to seniors”. What virus doesn’t have a higher mortality among seniors? 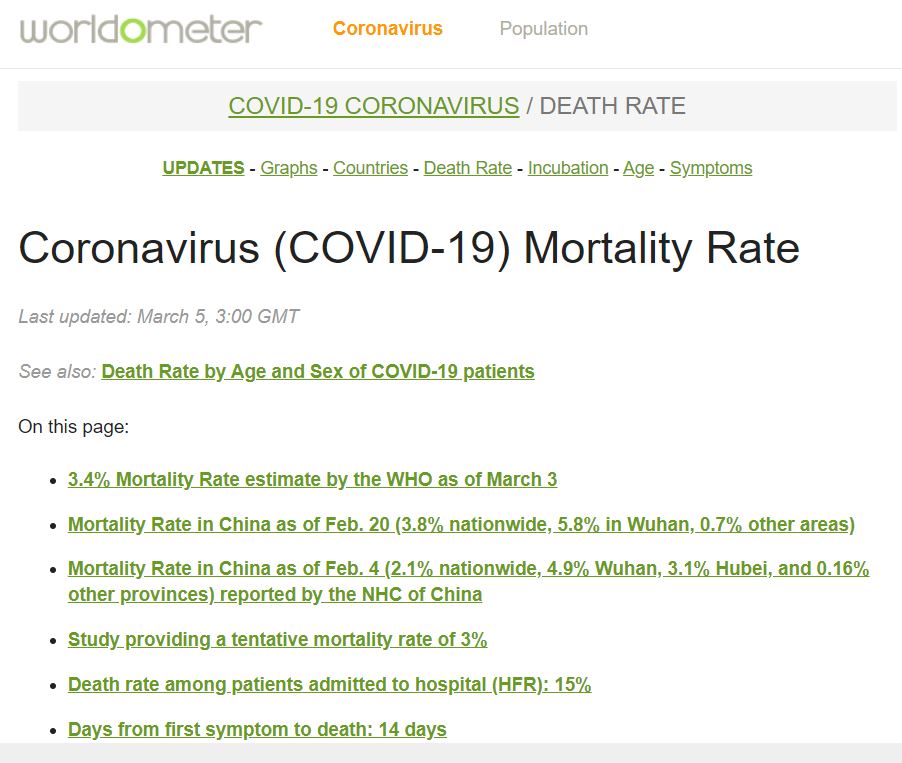 Literally everything posted on this TOP Google search was wrong. So now Facebook and others want to “fact check” the real stats?

When did the truth leave journalism? When did the lust for power and money exceed people’s will to help humanity?

Leftists around the world profit on the hysteria created by a virus that escaped a lab in China. All for the sake of destroying the one man who actually does his part to contribute to humanity.

Sadly for Leftists, another “insurance policy” to rid America of Trump won’t pay out.