Let’s face it, a guy who grows up in Hawaii with white grandparents isn’t really black; at least not by black Leftists’ definition. If Obama ran as a Republican, black Leftists would have called that Negro “Uncle Tom” more than Kentucky Fried Chicken claims, “Finger-licking good!”.

When Obama knew he needed to be more black, he dropped “Barry Soetoro” like a bad habit. Enter Barack Obama.

Next, he stopped messing with dudes, and got himself an ethnic black chick. A soul sista. With Michelle in tow, Barack was ready to go.

Game ON! Obama was ready to become black.

Obama started using vernacular around black folks. Likely learned how to play some “bones”. And he even played a bit of pick-up basketball.

Next, he found himself the blackest church he could find. A church that taught Black Liberation Theology. He embraced Rev. Wright, a black man who preach hatred of white America.

He planted himself in a city with lots of black turmoil, and pretended to care about black people. There he befriend (on the DL) Louis Farrakhan.

Game over. Obama was officially black. But Trump is far blacker.

Sure, Trump grew up rich, but you wouldn’t know it. He was an ordinary guy; like the dude from the hood who never forgot where he was from. Trump was the billionaire, who seemed like the average Joe.

Further, Trump was seen about town and readily accessible. Trump represented what blacks wanted to be. A big baller.

Rappers put the man in their lyrics dozens of times. They often appeared in pictures with him, and he embraced them. Remember Trump had Lil Jon on Celebrity Apprentice.

Rappers needed Trump. But Obama needed rappers. Like when Obama saw his blackness slipping, he befriended Jay-Z and Beyonce. Obama needed the president and First Lady of Hip Hop to raise his street cred. You know that Negro was listening to The Carpenters in private and crying in Michelle’s chest like he just learned Barry Manilow didn’t write the song, “I write the songs”. 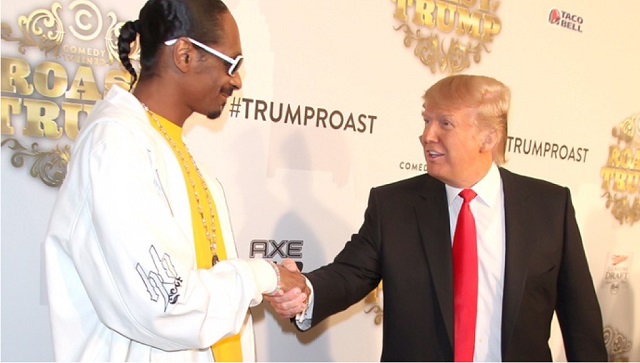 Trump never asked for rappers to embrace him, they just did! Then and now, bitches like Snoop Dogg, Eminem, and others want to be in Trump’s atmosphere, whether they admit it or not. Trump commanded respect, where Obama begged for it.

Look at what Trump has done for “his people”.

Posthumous pardoning of the first black heavyweight boxing champ, Jack Johnson. Then Trump freed Alice Johnson, a woman serving life for being a drug mule. Obama could have done this, but he was too busy hanging out with Richard Branson.

Trump gave Historically Black Colleges and Universities more money than Obama, and put funding in black communities. He’s created the most employed blacks in history. And he will do it again when the lockdown ends.

Trump promoted the first female Marine Corps general…a black woman. But his latest move may be his best. He is the first president in history to declare a white supremacist group a terror group.

Show me a man’s legislation, and I will show you his ethnicity. Trump is black and Obama is GREEN.

The reason America voted Trump in regardless of Obama’s faux blackness is because Trump is real. And he demonstrated that yet again in trolling Obama.

On Monday, Trump tweeted a satirical video that shows Obama (digitized onto the head of another person) . The video was a parody of an Allstate commercial. Obama “stars” in the role of insurance company’s spokesman Dennis Haysbert watching a basketball game with his friends before a commercial of Haysbert appears on the screen. In the original ad, Haysbert’s friends implore him to change the channel, which he does, only to find another Allstate ad starring himself.

The video’s creator superimposed Obama’s head over Haysbert’s. Then, instead of an Allstate commercial, a fake Biden ad (based on real comments by Biden) appears on the TV when the basketball game goes to commercial.

Not very presidential, huh? Perhaps? But funny as hell. And something people do.

What Trump again showed by way of Twitter is he has a sense of humor. If you don’t think black folks watched that video and laughed, you’re as demented as Biden.

And worse for Biden, black people are saying, “WTF did that cracka say?!”, as they hear Biden describing young black children playing with the hair on his legs.

Trump knows how to troll better than anybody. Biden in this example, and Pelosi a few days earlier.

Democrats have no chance against a guy as down-to-earth as President Trump. Even in a pandemic, he takes time to make fun of the guy he replaced and the guy who wants to replace him.

That’s BLACK! And Trump dares Obama or Biden to punch back. But neither one of those p*ssies will dare try to respond.