As Juliet said to Romeo, “Let me count the ways.”.

First, the president flipped the script on Democrats with the Chinese Wuhan Virus, and used the pandemic in his favor. Don’t believe me, and just look at the polls. At a time when unemployment soared, the president reached his highest approvals. Know that Democrats never expected this when they hatched their evil plan to take advantage of the “pandemic”.

Second, the president took a page out of the Democrats’ playbook. He publicly stated that he wanted stimulus to help businesses and individuals impacted by the pandemic. A Republican asking for money to keep the economy moving. Isn’t it Democrats who always pump money into the economy?

Now before you Conservatives get your thong too far up your butt cracks, look at the third point: Trump got Democrats to admit the government doesn’t have any money. The money belongs to the people.

He accomplished this by demanding that his name be put on the stimulus checks. And this is huge!

As The Week reported,

President Trump wants to make everyone know who to thank when their coronavirus aid comes in the mail: namely, Donald J. Trump.

A big chunk of the $2.2 trillion CARES Act that Congress recently passed will be individual aid payments to millions of Americans — $1,200 in many cases, but phasing out for individual incomes above $75,000 a year. About 80 million people got that money as a direct deposit in their bank account. But for the other 70 million, it will be coming as checks in the mail. And the Washington Post just reported that President Trump’s name will be on each check.

Needless to say, outrage quickly ensued — and not just from Democratic lawmakers, but from economists, former civil servants, and government watchdogs as well.

There are two complaints: One, that putting Trump’s name on the checks may delay their delivery. And two, that Trump is using what should be a “nonpolitical” process for political gain.

“Where you see the dying and suffering of your fellow Americans, Donald Trump sees another opportunity to promote himself — and, by extension, his reelection campaign,” tweeted Walter Shaub, a former director of the Office of Government Ethics.

Bluntly put, the second gripe that Trump is “promoting himself” with this stunt is essentially a gripe that he is engaging in good politics. On that score, his opponents would do well to emulate and learn from him.

Democrats for decades have wanted Americans to believe that government funds them. But in one fell swoop, President Trump got them to admit that people have the power, not government.

BTW you all realize that check Treasury is sending you with Trump’s name scribbled on it is your money, right? It’s your tax dollars that congress appropriated. Trump is basically the guy who “lends” you back your own lawnmower he borrowed and has had at his house for months…

BTW you all realize that check Treasury is sending you with Trump's name scribbled on it is your money, right? It's your tax dollars that congress appropriated. Trump is basically the guy who "lends" you back your own lawnmower he borrowed and has had at his house for months… 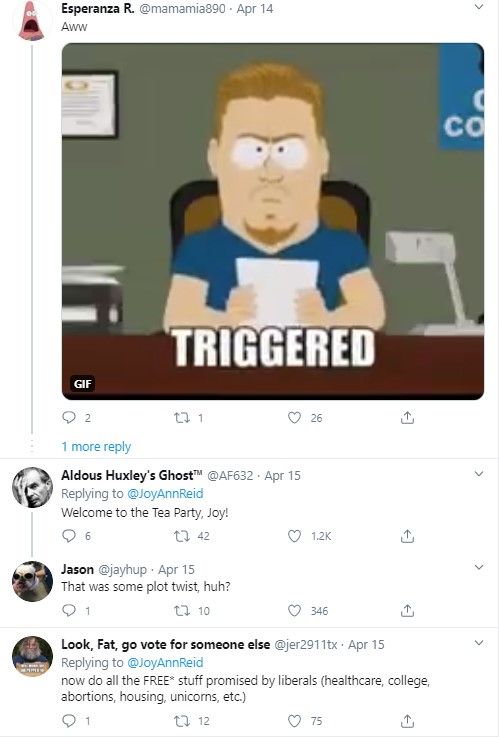 I’m betting Joy Reid wishes she could walk back that tweet. Too late!

What President Trump got many Leftists like Reid to admit is government finances NOTHING! We citizens send our hard-earned tax dollars to the government in hopes they do right by it. Usually they don’t. But government has grown so big, powerful and corrupt, that it no longer answers to the people.

Look at how the Obama administration wasted funds on green energy companies that failed. They use our tax dollars to pay back political cronies. And that’s just the tip of the iceberg.

In this test case to suspend Americans’ rights, Leftists never counted on a president who understands how to play their chess game. President Trump got Leftists to admit what they dared not say for decades.

Another stroke of genuis.