Trump defies the odds so much that one must start to question those setting the odds.

President Trump continues to enjoy record approval among Republicans. And he slowly siphons off Democrats. But the real problem for the Party of Lynching of Negroes is how well Trump does with Independents.

According to Gallup, “Most of the variation in Trump’s recent job approval rating is among independents.”

No matter what Democrats throw at Trump, he keeps winning. At some point they will realize their fate, and I’m not talking about November 3, when Trump gets re-elected. No, the day of reckoning comes sooner for the devious ancestors of the KKK.

As we’ve seen all along, leftists hide the truth about everything. And then they work to pin their crimes on the president. So far it hasn’t worked. And now we learn just how far leftists will go to bury the facts, thanks to CNN.

Trump has never polled higher. Not even on election day. And to make matters worse, Trump is beating Biden in battleground states. Clearly, leftists know the truth. Just like they knew the Steele dossier was fake. And just like they knew Trump didn’t collude with Russian or bully the Ukraine. But they won’t cop to the truth.

In fact, CNN’s own polls discovered Trump’s steadfast lead. Guess what they decided to do with the results?

You got it, they buried the truth!

After hyping up the poll for days, the results made CNN blush. So, they skewed them the best they could.

In fact, the National Review weighed in on CNN’s actions.

President Obama had an approval rating of about 48 percent at this point in May of 2012, on his way to being reelected by a wide margin. Joe Biden has an approval rating of only 45 percent, as against 46 percent disapproval, and that’s with Biden mostly shielded from public view. Biden’s penchant for gaffes largely escape notice when his public appearances mainly consist of reading from a Teleprompter in his basement, whereas Trump’s gaffes make headlines.

Biden bears no responsibility for all the things that have gone wrong, whereas Trump not only gets heaped with blame, but the pressure of managing a crisis spurs him on to more gaffes. Trump probably doesn’t need to win a plurality of voters to win a majority of Electoral College votes. And being disliked by a majority didn’t stop him before: The day he was elected president, he had a 37.5 percent approval rating, according to the RealClearPolitics poll of polls.

Why does Trump maintain strong numbers, though skewed by pollsters?

Easy answer. Trump performs, despite the childish distractions of the Democrats. Consider all that Trump thwarted. Like his taxes, for example.

No more discussions of Trump’s taxes have occurred in months. Not a single inquiry dating back to Oct 2019. See for yourself. 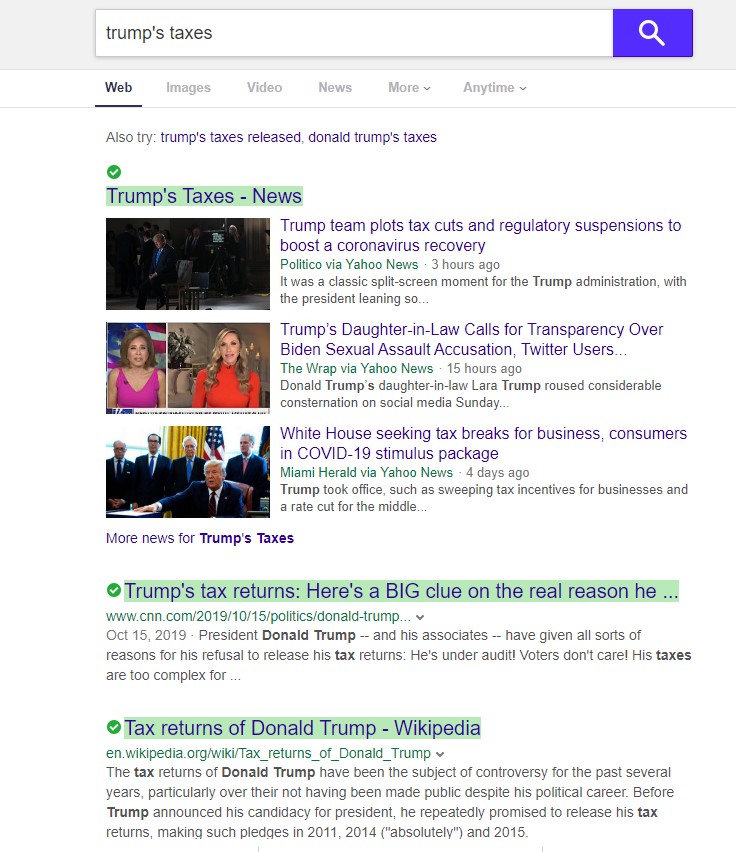 In the one article that discusses his taxes, CNN wrote:

President Donald Trump — and his associates — have given all sorts of reasons for his refusal to release his tax returns: He’s under audit! Voters don’t care! His taxes are too complex for regular people to understand!

None of those reasons made — or make — any sense. But now, thanks to CNN reporting, we may know the real reason why the President is fighting so hard to keep his returns from ever seeing the light of day: Because he paid so little in taxes — especially for someone who makes as much money as Trump does.

It’s been over 5 months, and no follow up? What happened? And where is Rachel Maddow, the dog protecting her bone over Trump’s taxes.

As Trump said in one press conference, Special Counsel Bob Mueller looked at every angle and up every crevice of Trump, and found nothing. Trump further commented that he’s the most investigated president on the planet. Of this, I have no doubt.

And soon Trump will be vindicated on all fronts.

But whether its Trump’s taxes or some pretend bimbo eruption, the truth about Trump finds its way to the surface. And it never bodes well for Democrats. Because almost all of sane America, and even most Democrats know two things: one, Trump has done nothing wrong; and two, almost the entirety of the Democratic Party and the Obama administration committed treason.

Democrats tried to frame an innocent man. And it’s not just Obama’s crooked Department of Justice, but the many other co-conspirators; too many to count. Yes, a scary large number of Leftist bureaucrats conspired against a man whose only intent was to make America great again.

So if you want to know why Trump remains high in the polls despite skewed polling, the answer is clear. Americans see through the games. No longer do Democrats sway public opinion as they have in the past. The polling shows that even Democrats and Independents see just how vile and evil the politics of Leftists have become.