Most Americans now believe the dreaded Chinese Wuhan Virus scare of 2020 is a farce. Because the numbers simply don’t add up.

I won’t bore you with all the inconsistencies, except to say the so-called Covid-19 virus is less deadly than “slip and fall” accidents. {Shh, Leftists will try to quarantine us from accidental deaths, if the word gets out.}

Whatever the reported number of Chinese Wuhan Virus deaths may be, I assure you the actual number is far less.

What inspired me to write this article is a tweet I saw. It was from Julia Song and read:

CDC QUIETLY slashes the number of reported covid deaths in the US by half. Went from ~60k to ~30k

It’s all a joke at the people’s expense at this point.

I looked on the CDC website, and saw nothing on this new number. But I still believe the tweet. After all, we are still dealing with remnants of Obama’s crooked government.

As of this writing, here’s what was posted on the CDC website. 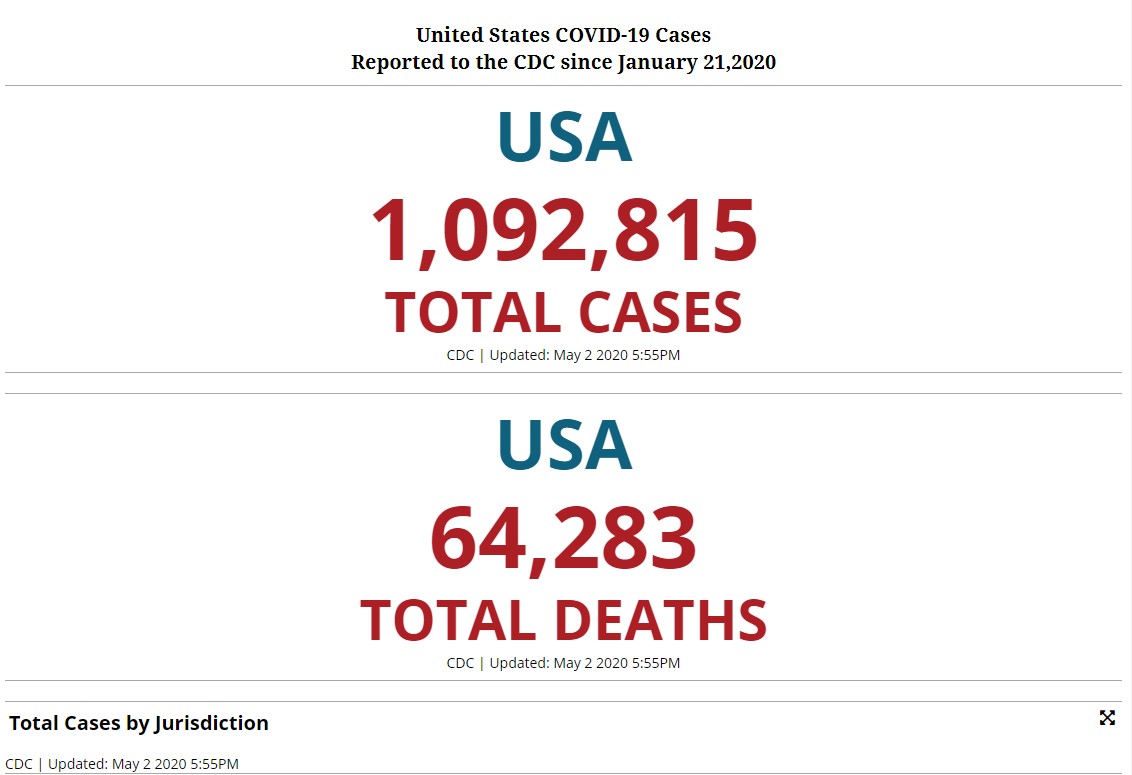 Given the incentive of hospitals to receive $39,000 to code cause of death as “Covid-19”, one can see how these numbers might explode. And hospitals need the money.

Thanks to the Chinese Wuhan Virus Hoax of 2020, the U.S. medical system is in triage:

Hospitals across the country have deferred or canceled non-urgent surgeries to free up bed space and equipment for covid-19 patients. But that triage maneuver cut off a main source of income, causing huge losses that have forced some hospitals to let go of health-care workers as they struggle to treat infected patients.

Last week, Bon Secours Mercy Health, which runs 51 hospitals in seven states, announced it would furlough 700 workers. On Wednesday, Ballad Health, which operates 21 hospitals across Tennessee and southwest Virginia, delivered the same bad news to 1,300 employees and said executives would take pay cuts. Employees at Children’s National Hospital in the District were informed this week that they must take off one week, using either vacation time or, if they have none, unpaid leave.

Bon Secours is not alone.

“I’m concerned about the [financially] weakest 25 percent of hospitals, because there’s no way the other hospitals can absorb their covid patients,” said John Fox, the CEO of Beaumont Health, Michigan’s largest hospital system.

It’s pretty clear to see that hospitals are incentivized to lie about the number of deaths, for their own financial well-being. And where you consider the oversight, why not get the extra “free” money?

But not all taxpayers agree with the largess happening in the medical field.

Ironically, the hospital tested my friend’s deceased cousin who had NO sign of Covid-19.

If indeed the CDC reduced the number of Covid-19 deaths by half (30,000), that’s almost $1.2B they saved the U.S. taxpayer. But keep in mind, hospitals will need to get their pound of flesh, pardon the pun. So services will go up in this “squeeze the balloon” scenario.