Apparently Joe Biden thinks he can “Hollywood” his way to the presidency. But, no awards will be given out for this acting job.

Still, Biden appears to have participated with the Washington Post’s Dave Jorgenson. The two appear to have partnered in a skit where Jorgenson walks his dog without him (or the dog) wearing their protective safety mask. And during the dreaded Chinese Wuhan Virus Pandemic Hoax of 2020.

It’s the video below labeled “(111/?)”. I guess Jorgenson is unsure how many of these he will make?

I’m guessing this video represents some of the 160 million people Biden claimed he reaches, a claim he declared in his interview with Charlamagne tha God.

There are roughly 254 million people over 18 in the United States. So Biden reaches 63 percent of the population. You couldn’t guess it from his Twitter numbers. An anemic 5.4 million. 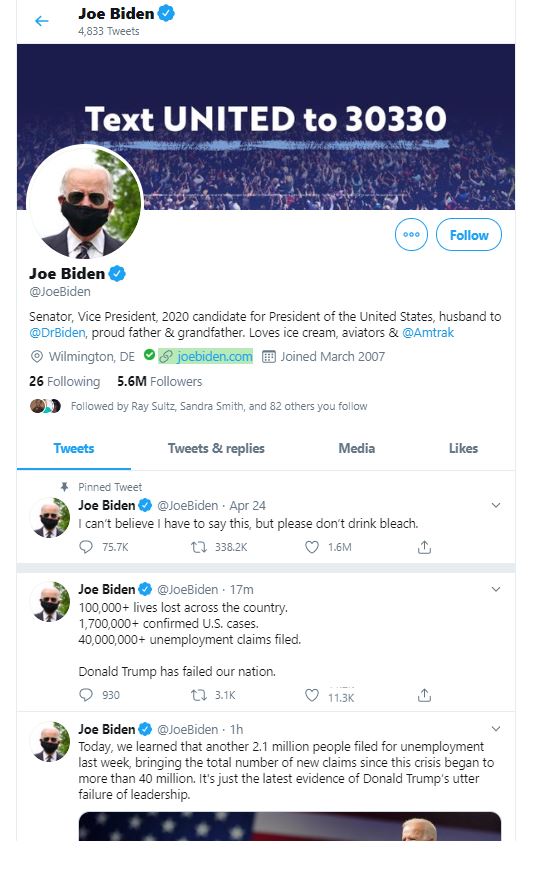 We can’t say with certainty that Biden’s followers are all real. I’d be willing to wager that many of that 5.4 million are bots.

Sadly, Biden’s biggest tweet ever involves warning people not to drink bleach. Over a million “hearts”.

While the response was overwhelming, many respondents I read were concerned that Biden might actually be drinking bleach. Thus, they thought his tweet represented a caution to all, since perhaps he had tried drinking bleach.

Truthfully, Biden looks unwell. His skin is pale (like he’s drinking bleach) and translucent. I still want to see Biden do an interview after 5P ET. They put the old boy on lockdown after 5P. Because Biden needs his paci and his adult diaper changed. He’s no good after supper time. 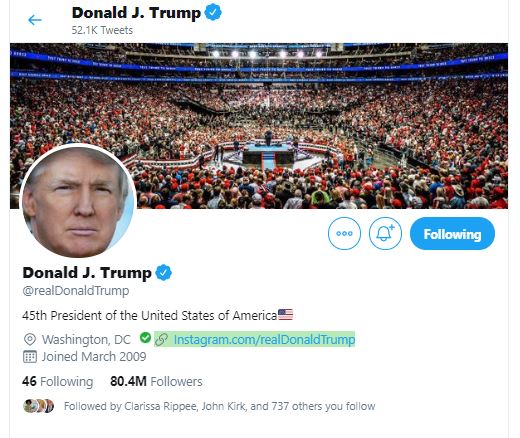 Trump has over 80 million followers! Almost a quarter of America follows Trump. And not looky-Lous, but actual followers.

Trump can theoretically reach in two tweets what it takes Biden to do with all his media. Not that I believe Biden has been seen by 160 million people anyway. Just another made up stat.

Like the NAACP endorsing him in all his campaigns?

Well, Biden won’t be able to make up for what comes next. As the pandemic nonsense rages on, Biden must show himself. That’s a dangerous proposition for the Left.

Biden has already put his foot in his mouth. He actually said that George Floyd is more important in civil rights than Rev Martin Luther King, Jr. That might cost him the “old black” vote. And in a rare moment of clarity, Biden admitted Trump will be re-elected. It won’t take long before Democrats realize they no longer have a stranglehold on the black vote. Or any vote for that matter.