How does a candidate with a long history of racism pretend he’s down with the black folks?

He uses the George Floyd riots as a photo op.

It’s a tried and true strategy straight out of the crooked democrat play-book. In fact, it wasn’t all that long ago when AOC made a similar move when she posed for pictures while visiting the detention centers on the border.

Of course, AOC was quickly ratted out for her bogus claims. And things won’t go any better for Biden. Even my five-year-old grand-daughter can see through Biden’s ruse. He doesn’t care about these rioters. He cares about posting pictures that paint him as a friend of the oppressed.

In fact, this is what Biden posted on Instagram. 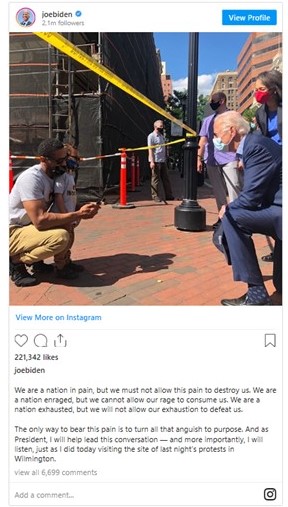 “The only way to bear this pain is to turn all that anguish to purpose,” he added. “And as President, I will help lead this conversation — and more importantly, I will listen, just as I did today visiting the site of last night’s protests in Wilmington.”

Of course, who knows if what he really said was anywhere close to coherent. He surely has a social media team to proofread him in print. Because we all know Biden is the king of gaffes.

In fact, I’m surprised Biden didn’t show up in one of those new t’shirts that say “You Ain’t Black.”

This isn’t Biden’s first attempt at snuggling up to the black community. A few months ago, Biden used MLK day to paint Trump as a racist while visiting a church in Charlotte, NC.

As I previously quoted:

He went on to recall the efforts and success of the Civil Rights Movement, saying that at the time people “thought we began to move and that civil rights was beginning to make some real progress.”

Biden forebodingly claimed that this progress was part of a movement that “has not been able to be stopped until recently,” warning that while “I thought you could defeat hate … hate only hides.”

Biden is correct, some days it’s more like 1920. But he blamed the wrong party.

“What I realized is that hate just hides,” Biden said after recalling [the Charlottesville shooting]. “And it when it comes out from under the rocks, when it gets a little bit of oxygen.”

The former vice president then went even further in connecting Trump to racism.

“This president and his–the Ku Klux Klans and the rest of them, they think they’ve beaten us again but they have no idea. We’re just coming back.”

Can the real racist please stand up?

When the party of lynching negroes starts calling Trump a racist, it’s almost laughable. Because it is so far from the truth.

Democrats haven’t been a friend to the black community. But they like to pretend they are. However, Obama proudly put more people on welfare. And he encouraged belligerent attitudes towards the police, which still rage on today.

Meanwhile, Trump accomplished more for the black community in his first term than Obama and Biden managed through their entire political careers. Before the pandemic, unemployment among black citizens reached an all-time low. Trump moved people from welfare to the payrolls. Furthermore, Trump enacted prison reform to get non-violent criminals out of jail. And he increased funding for HBCUs.

Trump wasn’t called a racist until his face-off with Hillary Clinton. But as they say, the proof is in the pudding. Trump is a true advocate for all Americans.

Too bad we can’t say the same for Biden.

Racism is just the beginning.

Joe Biden has stirred controversy throughout his 50-year political career.

In addition to the problems with his ‘wandering hands’, he has also made past crude remarks, such as:

The list could go on indefinitely. And Biden knows it. In fact, I bet he wasn’t worried about social distance when he visited the riot-sites. I’m willing to wager he wore that mask to hide his smirk. Because sincerity isn’t an emotion in Creepy Joe’s repertoire.