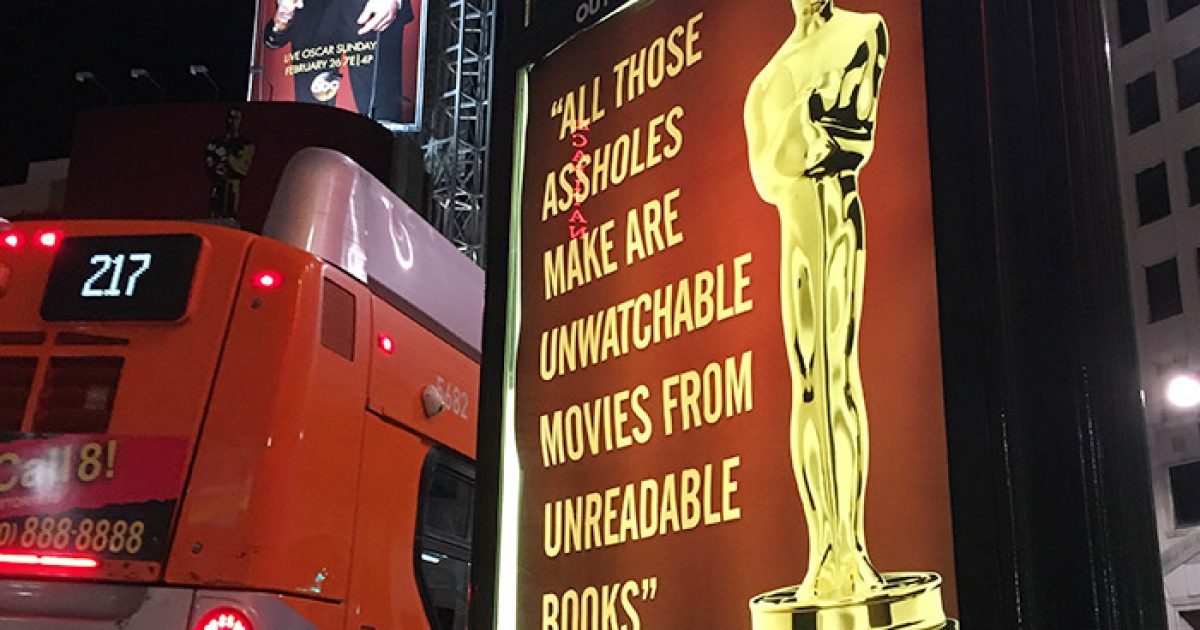 Remember #OscarsSoWhite? This was the hashtag used by black multimillionaires bitching that they didn’t get a white man’s trophy.

The “academy” took heed and made some changes. I won’t bore you with the details, except to say that the “academy” watered down the Oscars a bit by getting some of the judges “woke”. They then gave out a few token Oscars to squeaky-wheel blacks, and the world was temporarily good.

I speak for many when I say forget race as a problem with the “academy”. They just select crappy films.

Who is the “academy”? It is the Academy of Motion Picture Arts and Sciences, which oversees Academy Awards. Understand one thing. This is an organization created for the sole purpose of selecting people to make into mega stars. Even a nomination is supposed to be a big honor. Many so-called “stars” use this designation when promoting their appearances.

Now, the Academy decided to make a few changes. Thus, they’ve decided moving forward, movies will have to meet certain diversity and inclusion guidelines to be eligible for Oscars.

The group said in a news release that it will establish a task force to create “representation and inclusion standards” as part of its “Academy Aperture 2025,” an initiative to improve inclusion. The Academy has come under criticism over the years for a lack of diversity representation on screen and behind the scenes.

The deadline for the development of the criteria is July 31, according to the news release. They will not affect this year’s Oscars.

It’s unclear what the diversity requirements will include. The Academy might adopt some of the diversity and inclusion guidelines for eligibility introduced by the British Film Institute in 2019. They require entries to meet at least two of the four standards, including “onscreen representation, themes and narratives,” and “industry access and opportunities.”

Other changes: The academy is permanently setting the poll of Best Picture nominees at 10 beginning 2022. In recent years the number of films in the category was between five and 10. The organization’s Board of Governors also changed its bylaws to cap how long they can serve on the board. Previously, there was no limit but now, they can stay on the board for a maximum of 12 years. Governors who have, so far, served more than 12 years, will be given one additional term.

The Academy is also making unconscious bias training mandatory for its governors, branch executive committee members, and staff on an annual basis.

“While the Academy has made strides, we know there is much more work to be done in order to ensure equitable opportunities across the board. The need to address this issue is urgent. To that end, we will amend—and continue to examine—our rules and procedures to ensure that all voices are heard and celebrated,” said Academy CEO Dawn Hudson in a statement.

“…To truly meet this moment, we must recognize how much more needs to be done, and we must listen, learn, embrace the challenge, and hold ourselves and our community accountable. Academy leadership and our Board are committed to ensuring that we continue to weave equity and inclusion into the fabric of every Academy initiative, committee, program and event,” said Academy President David Rubin.

But it’s worth noting how ironic the timing of these changes is. This announcement coincides with the removal of Gone with the Wind from HBO’s platform. And while you’re thinking they’ve rid us of the systemic racism laced in the antiquated drama, you might be forgetting this one little trivia nugget. The 1940 Best Picture winner starred the first African-American to win an Oscar, actress Hattie McDaniel.