As the election nears, the Democrats get more desperate. And their desperation shows everywhere, especially in the polls.

Democrats’ demoralization strategy is pitiful and will be as successful as a snowball fight during an Arizona summer.

But I realize people like to worry, especially God-fearing Conservatives. Why should we put our faith in God, when we have all these polls to remind us of our frailties?

Still, while some of you worry, I prefer to look at the signs. Forget a Conservative winning in CA-25. Because that’s not proof enough is it? Well, try this one on for size.

Joe Biden won Kentucky with 57 percent of the vote. Here are the results: 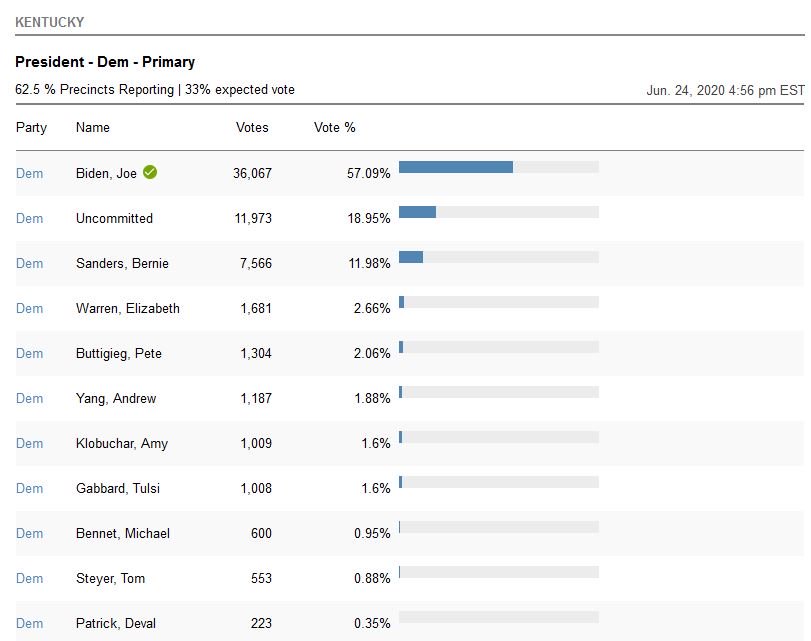 #2 was “Uncommitted” who came in at almost 19 percent. Next was Bernie Sanders at almost 12 percent.

Let’s analyze things to see if there are any signs.

We begin with the understanding that 94 percent of people supported President Trump. That number falls in line with polling around the support of his base. Using that barometer, Biden has solidified 57 percent of his base.

If all “Undecided” go with Biden, this still only takes him up to 76 percent, or 18 percent below Trump’s base. Still, how can a Democrat be “Undecided”, when there are no other candidates? Undecided is far from undecided. It’s Democrats who either won’t vote, or may vote for Trump.

But that’s only the beginning of Biden’s problems. Look at the Bernie vote:

Anybody think Kentucky didn’t get the message that Bernie Sanders is no longer in the race?

I predicted that Bernie Sanders supporters won’t embrace Biden. They are not “Undecided”, as they are decidedly decided. Thus, the will never support Biden.

Now as you consider just these points I’ve outlined, ask yourself how Biden could possibly beat Trump in any poll? The answer is pretty simple. He can’t. In fact, if we want to believe the polls, here’s a good one. According to a recent Zogby poll, most voters think Biden is certifiably crazy.

And let’s not forget that Trump trailed Hillary in the 2016 polls. Another interesting point for that comparison is this. The 2016 voters had no idea what kind of president Trump would be. They exercised blind faith. Now, voters are walking into the booth knowing Trump’s power to push our country back to greatness.

Before covid-19, the economy soared. Unemployment hit record lows. The black community saw HBCU’s get more funding than ever before. Prison reform took place. The list goes on and on.

And for those who find Trump’s personality a bit abrasive, Lindsey Graham puts things in perspective. It’s not about personality. It’s about policy. If ever there was a time to focus on a leader’s abilities to weave policy around our needs, it’s certainly now.

In other words, I think it’s safe to say today’s polls are no indication of what will happen in the next five months. Because Trump’s base is magnanimous. And come election day, they will be fired up. I guarantee it.