The WuFlu spike is just another leftist ploy. A double-testing lie.

Heather Stancil posted this story on Facebook about double-testing of her mother:

So my Mom was not feeling well and in AZ she has to meet with a doctor virtually before they would schedule an in person appointment. With no physical examination or test he declared she had COVID. That was yesterday. So she went online to check her medical file & it said in big letters COVID patient. Again, no test. Then, she called the testing location to set up an appointment to get tested. They told her that if she came back positive for antibodies, regardless of whether or not she was ill, they would count her as a positive case. Then she’d have to come back in 14 days to be tested again. So, she asked what would happen if she still tested positive for antibodies (because those don’t go away, duh), and she was told she would be counted as another positive case! She clarified: “so you are basically counting twice for the same person?” They said yes, because we count tests, not individuals. So she then asked what then? She was told, well nothing, you just go to the hospital if you feel worse.

Stunned she then asked: “so what is the point of getting tested at all?” They had no answer, and acted like they never thought of that before.

So basically, in addition to increased testing, Arizona is double counting the same patients. How many other states are doing the same thing? Folks, we are being played. This “spike” is a lie.

Anybody surprised to learn that Democrats continue to try to shut down the economy? And here I thought Biden was polling so well.

Democrats have major problems related to the bloated fictitious WuFlu numbers. Because while the infections supposedly continue to rise, the drop in WuFlu deaths can’t be ignored much longer.

Take a look at this chart:

Mother Jones noticed the trend, and gave this excuse:

Cases and deaths were following a roughly similar trend until mid June, when cases suddenly started to skyrocket while deaths continues to steadily decline. What’s going on?

Part of the answer, of course, is that deaths are a lagging indicator, and you don’t really expect them to increase until cases have been high for two or three weeks. It’s possible that the death rate will turn upward next week.

There will be no uptick in deaths.

Leftist governors like Cuomo of New York and Whitmer of Michigan and others have killed most of their old people. And most of them didn’t die of WuFlu, per se, but instead from underlying conditions. So unless these Leftist scoundrels plan on killing their Millennials, they have real problems.

That big divide we now see in new cases versus deaths will continue. And you won’t see Leftists even discuss the dramatic downtick in deaths. Isn’t deaths what should concern us most? Look at how the media sells the decline. 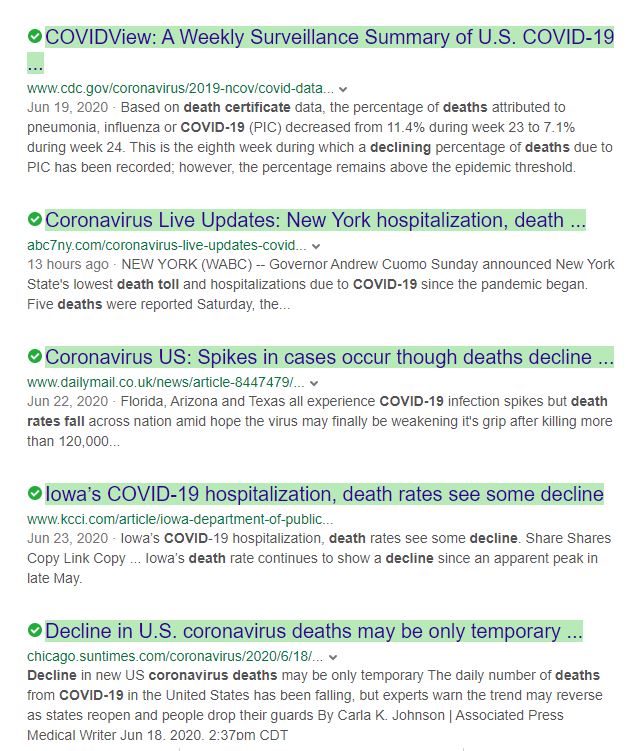 Notice how most of the media suggests that the decline in deaths “may be only temporary.” Or they may very well be permanent. Almost all of the articles I googled offer some warning against optimism.

In other words, don’t believe math or reality. That would lead you to ask, “If people are catching a disease but not dying, what the hell is everybody doing wearing masks? And why are we “social distancing” and other nonsensical things?”

Double-booking WuFlu cases. That’s happening all over the country. Democrats wanted testing, because they knew they would manipulate the numbers. But now there is dead silence on deaths.

What vile sinister people to attempt another scare of Americans. All these Leftists a-holes walking around in their masks, virtue-signaling. In actuality, Leftists want mask wars.

Democrats want the WuFlu to shut down the economy. AOC constantly tweets about the rich getting richer during this pandemic. Yet she voted for policies that aided such wealth doubling. And Maxine Waters definitely hopes the pandemic stifles the economy. Because she believes that would rid the country of Donald Trump.

Sorry Maxine, but that’s not the way this will go down. All we need do is make sure all the people hurt by the Left know exactly who hurt them.