The leftist media constantly presents statistics that claim Trump is slipping in the polls. In fact, some declare Biden has an outright lead.

But the truth is, the Biden supporters aren’t so easy to find in real life.

Obviously, when you spend your days writing about politics, a lot of polls cross your desk. At least, they cross mine. If I don’t catch it on the news (because I rarely tune in to the mainstream media), someone emails it to me. And I’m always surprised by the garble leftists try to pass off as fact.

Today, the US News wrote:

A poll from Franklin & Marshall College’s Center for Opinion Research shows the former vice president up by 9 percentage points in Pennsylvania, which Trump won in 2016. Biden also leads the president in Florida, with a Mason-Dixon poll showing him up by 4 points, according to WJXT-TV in Jacksonville.

I won’t bother to explain why that poll has it all wrong. November will clarify things. But lately, I hear more and more about the “silent majority.” And I can’t lie, I really spent some time recently pondering where this “silent majority” falls. Are they on the left or the right? If you google “Trump silent majority,” you get articles on both sides of the argument. 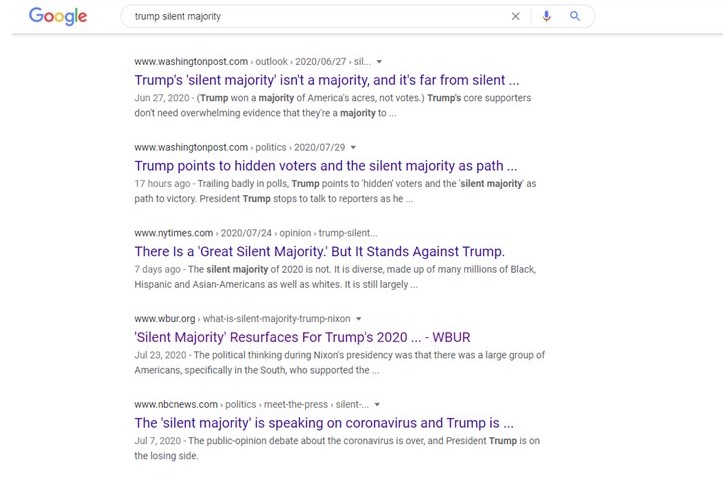 But my gut told me these so-called “silent” people are really the fabric of Trump supporters. But I needed more than a feeling. I was looking for proof.

Last weekend, that proof jumped in my lap. Every year, I take my family on a vacation to Port Bolivar, Texas. It’s a hop, skip and a jump away from Galveston. My daughter and son-in-law do a free concert on Crystal Beach. It’s become quite the event.

My husband is in charge of securing our spot. This year, I rode along. And I was amazed by the sea of Trump flags. Those flags were there last year, and the year before. But this year, they’ve multiplied. Ten-fold if I were to put a number to it.

Thousands of people were set up along the water line. (Yes, they seemed to be socially distant.) And from my vantage point, it was a sea of conservatism.

There were American flags, Texas flags, and more Trump flags than I could count. But nowhere could I find a Biden flag. Trust me, I searched. There were no Obama flags. Certainly, we didn’t see any Hillary flags either. Not even a “I stand with her” t-shirt. In fact, I walked a good stretch talking to people, and I couldn’t find a liberal anywhere. Not one.

We were there nine days, and each day the sight was the same. After one trip to the beach, my son came home with a flag that I should have banned because of the f-bomb. But I let it slide. The flag said “Trump 2020. F^*$ your feelings!”

Honestly, I’m proud that my kids are die-hard conservatives. Especially considering I gave each of them the space to come to their own political conclusions. So far, there’s not a leftist in the group.

Eventually, we did come across one liberal. My husband loves to mingle in the crowds while the band plays. He met a woman who said she was a democrat. But she was amazed by the energy of the people. She actually used the word “incredible.” Then she took a few pictures to text to her parents. Shall I say CONSERVATIVE parents. I’m guessing their hearts beamed with joy to see her in a Trump crowd.

Clearly, he’s been a joke for many years. Today I stumbled upon this little gem from the late great Robin Williams.

Biden was the butt of the joke even when Obama was still in office. It’s no wonder he couldn’t get Barack to endorse him until there was no other choice.

Leftists can publish poll after poll to pretend Biden is gaining traction. But those polls don’t matter one iota if we can’t apply them to real life. And in real life, the Biden supporters are pretty hard to find.

A democrat might argue that I took my facts from a beach party in Texas (a staunchly red state). But I challenge them to show me people who aren’t gathered for political purposes. Because we all know democrats are willing to buy the crowds of political rallies. But if they can find a sea of Biden flags randomly gathered where people gather, I stand corrected. Until then, I’m just waiting for election day, so we can get this virus nonsense all healed up and get back to #Winning.