Call me a skeptic, but I knew Team RBG–Leftists, the media, and Democrats in general–lied about Justice Ruth Bader Ginsburg’s recent hospital stay.

As it turns out, Ginsburg returned to the hospital for a much more serious reason.

Ginsburg issued a press release to explain her deception: 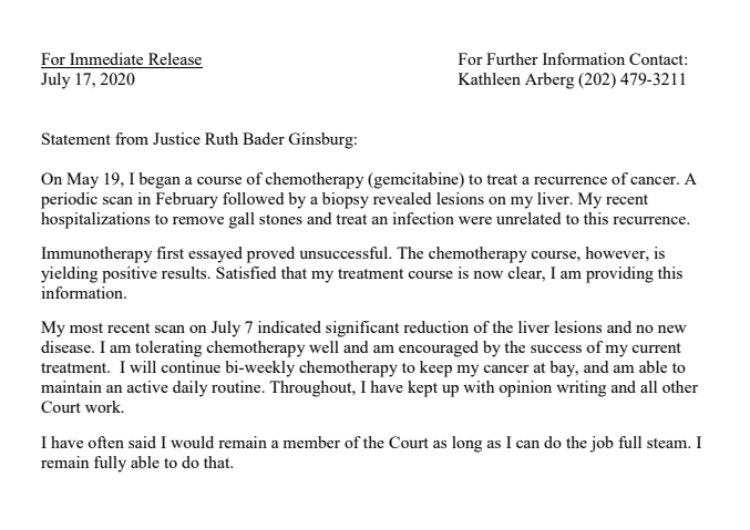 According to her own statement, Ginsburg began a course of chemotherapy on May 19.

A periodic scan in February followed by a biopsy revealed lesions on her liver. Then, a treatment of immunotherapy was unsuccessful. But supposedly the chemotherapy course is “yielding positive results.”

Ginsburg continued with claims that her most recent scan on July 7 indicated significant reduction of the liver lesions and no new disease. “I am tolerating chemotherapy well and am encouraged by the success of my current treatment,” she said.

How many 80-something-year-old people are (1) working, (2) in a job where life and death lies in the balance, and (3) with multiple debilitating ailments?

Holy Mother of Mary, are there any original non-irradiated parts left on this woman?

If you think Democrats plotted to dump Trump in 2016, know they are going insane now. Ginsburg is toast, and has been for months. She will not last another Trump term.

What were we told? Here’s CBS News’ report:

Supreme Court Justice Ruth Bader Ginsburg was admitted to the hospital early Tuesday morning, the Supreme Court said. She is being treated for a possible infection.

At least that’s what CBS and other media outlets implied. And now we know Ginburg’s cancer is back. Just another fake news story to throw the public off.

Still the ruse, as the article continues,

“The Justice is resting comfortably and will stay in the hospital for a few days to receive intravenous antibiotic treatment,” said court spokesperson Kathleen Arberg in a statement Tuesday.

Interestingly, no mention of COVID-19 with Ginsburg:

Ginsburg was initially evaluated at Sibley Memorial Hospital in Washington, D.C., on Monday night after experiencing a fever and chills. She then underwent a endoscopic procedure at Johns Hopkins on Tuesday to clean out a bile duct stent that was placed in August 2019.

Apparently the Left knew not to associate Ginsburg with WuFlu or we all would have been forced to take things more seriously, given that additional ruse.

The article mentioned fever and chills?! Obviously, that’s much more akin to WuFlu than cancer! Yet, leftists abandoned the COVID-19 fake news narrative. Because the truth is far worse. Cancer.

I DARE any Leftist to debunk this. Sadly, America grew accustomed to regurgitating lie after lie. Ginsburg’s sickness is no different. But Trump’s replacement will be monumental.