A friend of mine texted me yesterday. He told me Herman Cain died. I was shocked and immediately began writing a post about Herman, a mentor of sorts to me.

As I began to write about Herman’s death, I decided to verify the story.

In my search, I could find no other mention of Herman dying. I texted my friend back a bit perturbed that he got my blood pressure up at the potential loss of my friend.

I didn’t believe my friend completely. Because I had just seen a tweet from Herman’s business manager saying he was fighting, but in good spirits. Certainly part of me didn’t want to believe it.

And now I get the news that indeed Herman Cain is gone.

Herman Cain, the TV and radio host, former business executive and 2012 Republican presidential candidate, has died about a month after he became sick with the novel coronavirus disease, his team announced on Thursday morning. He was 74.

“We’re heartbroken, and the world is poorer: Herman Cain has gone to be with the Lord,” reads an update posted to his official website.

“We knew when he was first hospitalized with COVID-19 that this was going to be a rough fight,” Cain’s friend Dan Calabrese wrote in that update on Thursday. “He had trouble breathing and was taken to the hospital by ambulance. We all prayed that the initial meds they gave him would get his breathing back to normal, but it became clear pretty quickly that he was in for a battle.”

Calabrese continued: “We all prayed so hard every day. We knew the time would come when the Lord would call him home, but we really liked having him here with us, and we held out hope he’d have a full recovery.”

Herman Cain was an innovator. A success where black people weren’t necessarily supposed to be successful. In business.

And he had a legitimate shot at being the first black president. More on that in a bit. 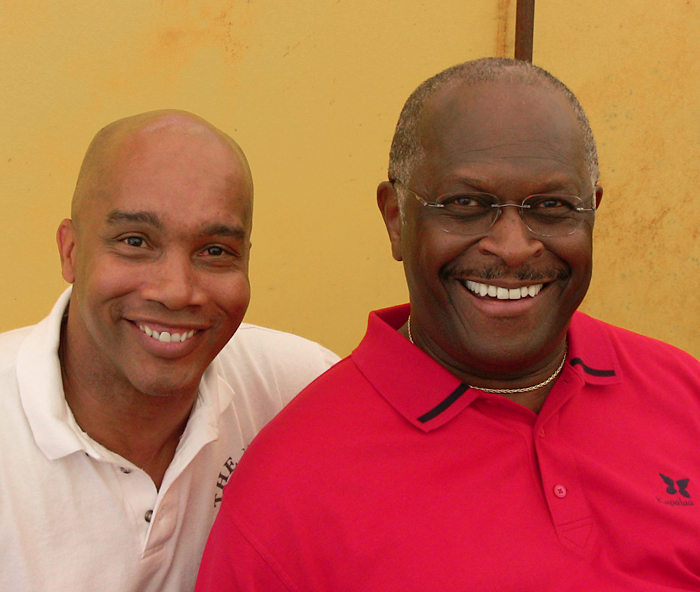 I first met Herman at an event near St. Louis. We were instant friends. It would be quite some time before I saw Herman again. By the next few times we saw each other, I had made a lot of progress, enough to make Herman proud. I had written a couple of best-selling books, and was unintentionally rising in the Conservative ranks. But Herman had fared far better.

In fact, he was so popular he made his presidential bid. Even better, at one point Herman was among the leaders for the nomination. But soon his hopes were derailed.

Not long after Herman suspended his campaign, he and I met in Las Vegas for an event. I The guy who sponsored the event was a bit of a “star f*cker,” and wanted people to know that he paid for Herman to show up. But as soon as Herman saw me and my girlfriend at the time (now my wife), and he came over to hug us both. Herman gave great endearing hugs.

He then asked me to sit with him for a minute where we discussed his campaign.

I began the conversation, saying “The Democrats figured out a way to take you down.”

Herman snapped back, “It wasn’t the Democrats who took me down, Kev; it was the Republicans!”

And he was hot, as in mad! But soon after, Herman returned to being his normal jovial self. The experience was water off a duck’s back. That was Herman.

We agreed to keep in better touch.

I saw Herman last at the 2016 Republican convention. He interviewed me for his radio show, and we yucked it up about things. As I think about his passing, I remember the song Cats in the Cradle, where the father doesn’t spend enough time with his son.

There were planes to catch, and bills to pay…

Herman and I kept putting things off. But Father Time catches us all. So now, I’ve lost a good friend, a good man.