Imagine spending all that time to pick a running mate, and you ultimately end up selecting Kamala Harris. Clearly, the girls do get prettier at closing time.

The funniest tweet I saw on the Harris announcement read, “Biden was just as surprised as me when he found out who the VP pick was.”

This pick was horrendous on so many levels, so where to start?

Let’s begin with “She ain’t black.”

You would think the man who coined the phrase “You ain’t black” would know that Harris  ain’t black. Harris is the product of an Indian mother and a Jamaican father. Not quite the experience “African-Americans” wanted. Black voters proved their lackluster attitude towards Harris and the other 3 black Democrat presidential candidates.

Two Senators, a former governor, and a black businessman all failed to garner any significant portion of the black vote. Why? Because they ain’t black.

And there is that rift.

Bernie Sanders former national press secretary, Briahna Joy Gray is no friend to Biden. And she commented on the selection of Harris, referencing her tenure as the attorney general of California:

“We are in the midst of the largest protest movement in American history, the subject of which is excessive policing, and the Democratic Party chose a “top cop” and the author of the Joe Biden crime bill to save us from Trump. The contempt for the base is, wow,” Gray tweeted.

We are in the midst of the largest protest movement in American history, the subject of which is excessive policing, and the Democratic Party chose a “top cop” and the author of the Joe Biden crime bill to save us from Trump.

The contempt for the base is, wow.

If Obama had a sister.

Biden still lives on the muscle-memory of his former boss. Therefore, Biden remains trapped in the Black Camelot era of the first election of Barack Obama. Who can forget the mindless adoration of the man who brought abject incompetence to the presidency. Yet all the world fawned over Obama, because he was the light-skin Negro who could speak the King’s English.

Obama’s problem is he actually had to be president and not just play president. Black America witnessed the do-nothing-for-blacks presidency of Barack Obama for 8 years. And Kamala Harris represents Obama’s younger sister, riding the coattails of big bro.

She brings nothing new to the equation as the role of #2. But like Obama, the notoriety benefits only her. She will feather her nest and blacks will get nothing. Black people recognize this. So if Biden thinks Harris will bring the black vote, good luck with that.

Credit to Biden and the Democrats for sticking with their light-skin no-account Negroes.

In fact, the Party of Lynching of Negroes demonstrates a serious penchant for light-skin folks. That’s one of the reasons Biden so loved Obama. That, and who else could resurrect the career of a racist pathological liar, but a light-skin Negro?

Biden really loved that Obama was just the right amount of mocha for the separatist-friendly, KKK-supporting senator. A brown-skin black man acceptable to whites. Any darker and white Leftists might be afraid of him. Or her.

So Kamala Harris is Lil Sis to Barack. Whether or not she is “clean” remains in question, though Biden has chosen to ride Harris. And Holy Mother of Tara Reade does Joey Fingers like riding his women. Which is why Harris makes a good choice.

No help from #MeToo

Let’s keep it real and admit that “Doctor” Jill Biden won’t leave Joey Fingers solo with Harris. That scenario is fraught with ugly possibilities, particularly given Joe’s mental state. Who knows what Jill might walk in on.

I can see Joe in bed on his back as Harris sits astride with his will in her left hand and a pillow in the other.

Admit it, Leftists; Harris isn’t exactly the poster child for the #MeToo.

The #IGotMine movement perhaps. Because Harris has a not so unique feminist way of rising through the ranks. In-tune Americans know that Harris slept her way to the top. So if Democrats worry about what Trump did with Putin, just wait until they consider what Harris is willing to do to the virile Russian.

“Don’t worry Joe, I will meet with Putin and his boys. You know I’m willing to take one (or more) for the team!”

In the time of “woke” America regarding women, Harris represents the last person Biden might have considered for his #2. I hope he at least considered Epstein’s setup girl, Ghislaine Maxwell or celebrity madame Heidi Fleiss, given his final choice.

Still, the Leftist elite will pretend to love the choice of Harris. Check out the media spin from AP:

“It tells Black girls that they can be president,” said Cochran, who recently ran for state representative in Michigan. “If you look back at Shirley Chisholm, she ran so that Kamala could lead at this moment. I think it’s important for us to look at that and see other young women of color realize that they can go after their dreams and really make change in our world.”

Sure, because what could black girls possibly think about their chances of being successful in America? I mean who are their role models, in a country that beats black women into submission daily. Who do they think they are…Oprah?!

The article continues, speaking of the always noted “historic” nature of the choice:

Harris’ selection is historic in many senses. It also marks the first time an Asian American would be on the presidential ticket. Born to a Jamaican father and Indian mother, she often speaks of her deep bond with her late mother, whom she has called her single biggest influence.

And my favorite part is how we learn yet again how powerful “voters of color” are:

Harris’ boundary-breaking potential serves as an affirmation of the growing power of voters of color, according to nearly a dozen interviews with political strategists, potential voters and activists.

The woman who gave Hillary Clinton the debate questions, Donna Brazile chimed in:

Right. A public servant. Who. Slept. Her. Way to power. 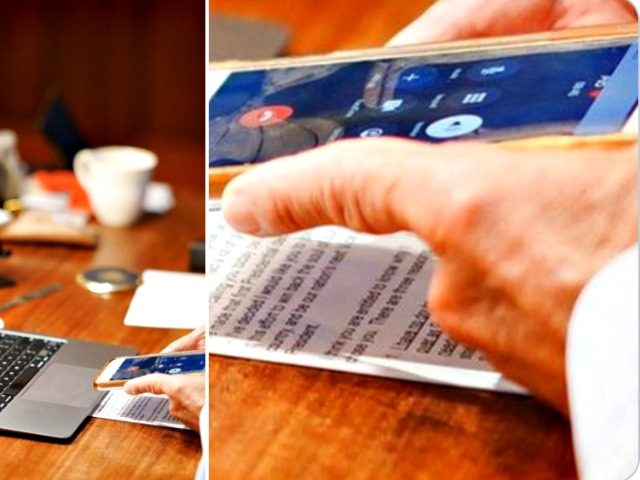 Even more funny is how the Biden team orchestrated the call.

Biden hunkered down in the bunker of his rat hole contacted Harris. He then demonstrated his passion about his choice of Harris, as he read from a script.

Breitbart noted this in an article from Robert Kraychik, that Captain Demento couldn’t just deliver his lines on this ground-breaking “historic” moment. He had to read from a script.

Social media was not so kind.

“Kamala’s presidential campaign was a total humiliating disaster. One of the worst of all time, considering the amount of unearned hype she received. Did everybody miss that, or what?” Tracey asked.

Kamala's presidential campaign was a total humiliating disaster. One of the worst of all time, considering the amount of unearned hype she received. Did everybody miss that, or what?