I refuse to wear a mask, because I know what the Left is doing. Leftists plan far out into the future. And this trial run on masks showcased crazy success for them.

I was speaking with a politician recently and he addressed the mask issue. “Well, we must play the game.” And this is a guy whom I consider to be a staunch conservative. He’s willing to “play the game.”

Sadly, it’s a serious game. And I saw a tweet that explained what comes next after mask mandates. The person tweeted:

Illegal to excercise outside your home

$20 k fine for falsifying documents (where you live, occupation etc)

Police allowed to enter your home at any moment without warning

How does that sound for those of you who see wearing masks as no big deal?

Here is an excerpt from Summit News about the restrictions in Melbourne.

After the state of Victoria announced a “state of disaster” in response to a spike in coronavirus cases, Premier of the state Daniel Andrews told residents, “We can no longer have people simply out and about for no good reason whatsoever.”

In addition to an 8pm to 5am curfew, residents can only leave their homes outside those hours to shop for food and essential items, carry out care and caregiving, as well as daily exercise and work.

The new powers also give police the right to “enter your home to carry out spot checks even if you don’t give them permission and they don’t have a warrant,” reports LockdownSkeptics.org.

Controls on buying have also been introduced, restricting citizens to purchases of no more than two of certain essential items, including dairy, meat, vegetables, fish and toilet paper.

As we highlighted earlier, immediately after the government announced the new draconian measures, police in their hundreds positioned themselves around residential tower blocks to ensure no one could leave.

People were told they must stay in the residence in which they slept the previous night for the next six weeks. Anyone who violates the new rules faces a fine of up to $1,652, an amount which is set to be increased.

Without an ounce of proof regarding the public danger of the Chinese Wuflu, Melbourne restricts the rights of law-abiding, non-ill citizens. All for the theoretical protection of those who might get sick.

Based on what evidence?

To put this in perspective, look at the Chinese Wuflu stats for Spokane, WA. 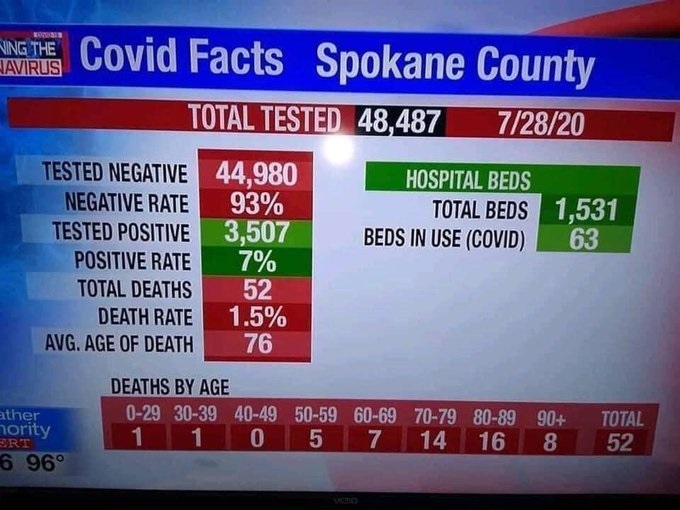 Holy Mother of Cuomo, based on these numbers the only people who need to be in lockdown are people over 70 years old.

Remind me: what is the average lifespan of Americans these days? If the average of Wuflu death is 76 years old, what the flunk are we concerned about? In fact, why are we even counting these deaths.

The most people died between 80 and 89. Seriously! And they want us to believe Wuflu is the culprit. Well, pull my finger.

The actual stats proved that Leftists lie about Wuflu on all accounts. Death rate, hospitalizations, number of beds, and so on. The same stats hold true all over the world. Yet, we get measures by Melbourne?

To call these measures Draconian gives far too much credit to the Athenian Draco. Even he would likely consider what’s happening in Melbourne overreach.

When do Leftist governors and mayors take a page from Melbourne’s overreach, and implement these same measures stateside? Clearly, governors from Michigan and Illinois seem to believe they are Draco.

Massive government for nothing. And potential revenue for enforcing an unconstitutional mandate. Together, this represents a Leftist’s wet dream.

I predict America will wake up to this ruse soon. But then again, I never believed that most of the country would be wearing dumb ass masks.