President Trump demonstrates shrewdness beyond compare. And his prowess revolves around Twitter.

That’s why Trump is Trump. He sees into the future.

It stuns me that there are still Republicans who complain about Trump’s Twitter habit. His master trolling of the Dems is always entertainment gold to me. He’s actually making plague year politics fun with stuff like this.

The president had a couple of critiques of the two biggest speeches of the night. One for Obama:

and one for Harris:

Let’s start with the predecessor.
Obama reportedly told Joe Biden “you don’t have to do this.” Further, he went on to say, “don’t underestimate Joe’s ability to f–k things up.”
That’s quite the departure from the little “best friends for life” show Obama put on during his final days in the Oval Office. Who can forget the love fest that ended with Biden’s “medal of honor.” 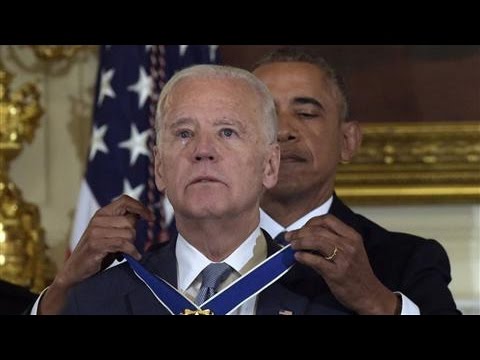 As I recall, mainstream media acted like the whole thing was some big surprise. Biden managed to produce a few tears while pledging his undying love to baby black Jesus.
As I wrote a few months ago:

So what happened? Joe stepped into the 2020 ring believing he had a heavy-weight behind him.

And based on Obama’s words, it’s easy to see where Biden got such an idea.

But we already know the answer to that question.

It’s really quite simple. The whole bromance was a farce. It was Obama’s way of staying “white enough” while occupying the White House.
The only reason Obama kept Joe in his circles is to keep Biden from blabber-mouthing the few Obama secrets he was privy to. And finally, when there was absolutely no other option. And for a man obsessed with his supposedly scandal-free legacy, continuing his ties with Creepy Joe won’t bode well.
But remaining tied to Biden isn’t what stings the most. What has Obama shaking his head in shame is the fact that Trump called him on it. Trump didn’t have to come up with a clever jab or a brilliant nickname. All he had to do was write the absolute truth. With one tweet, Trump exposed the crack in the Democrat party.

Trump couldn’t burn Obama without throwing a few flames at another dubious Democrat. During Democrat primaries, the feud between Biden and Harris lit up the media circuit. Who can forget Kamala’s attempt to pull off the “angry black chick” routine? She continually embarrassed herself on the campaign trail with her cries of racism and clumsy, misplaced one-liners aimed at grabbing her thread of viral media exposure.

She went viral alright, plenty of times. But instead of roasting Republicans, Harris exposed her own lack of leadership qualities. On the bright side, she inspired a host of hilarious memes. Now, Harris joins Obama in the hot seat of Trump’s tweets.

Yet again, all Trump did was remind Democrats of their own words.

As Newt Gingrich put it:

Now, the Democrats are trapped with a presidential candidate who 38 percent of the country thinks has cognitive issues and 59 percent believe will not be able to finish his first term in office. Meanwhile, his replacement is a proven incompetent as a campaigner and a textbook opportunist on core issues.

Or, as Kevin Jackson put it, “Harris is politically schizophrenic.” And Trump loves to put the crazies on display.