Democrats did not think through the ruse of the Chinese virus when they disrupted their “miseducation” system.

In their attempt to destroy Trump’s stellar economy, Democrats put Americans on lockdown. Businesses, churches, and schools closed. All for the sake of “saving lives”. But the unintended consequences put a wrinkle in the fabric of Leftism that may never be ironed out.

As teacher Matthew Kay warned in a thread (below), the school’s “equity/inclusion work” could be disrupted.

So, this fall, virtual class discussion will have many potential spectators – parents, siblings, etc. – in the same room. We’ll never be quite sure who is overhearing the discourse. What does this do for our equity/inclusion work? (Thread) 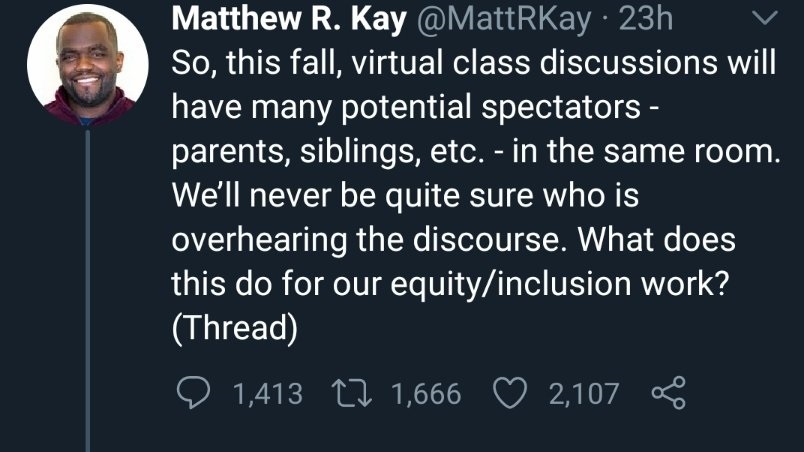 Since when is a so-called educator concerned about people who might look into their class?

I’m truly perplexed. Because in all my interactions as an instructor, I’ve welcomed spectators. That’s how you attract people to your point of view. The only people I’ve ever seen not want their instruction seen are those who are incompetent.

Kay goes on to describe their school as a “(somewhat) secure barrier” in discussing the equity and inclusion. 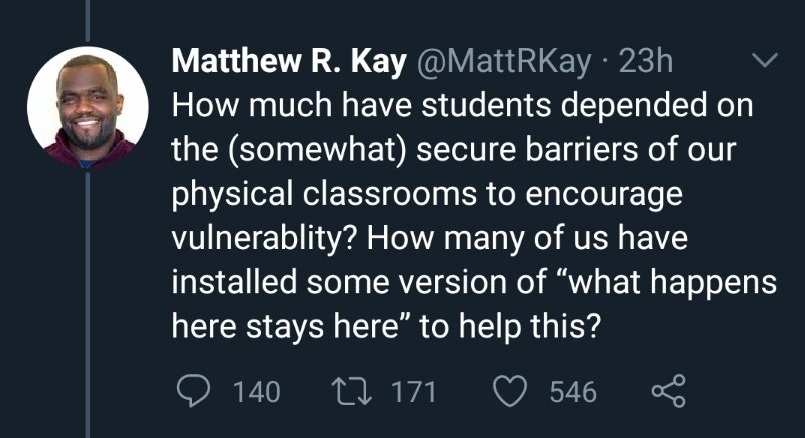 I read here that schools are a safer environment than homes. Perhaps. But is this really his concern?

I contend Kay is more concerned about his teaching techniques than the students themselves. Because vulnerable minds can be easily melded when there exist no alternative thought.

Next, Matthew Kay tackles race. He admits that he’s comfortable about race in this comment, but has other concerns: 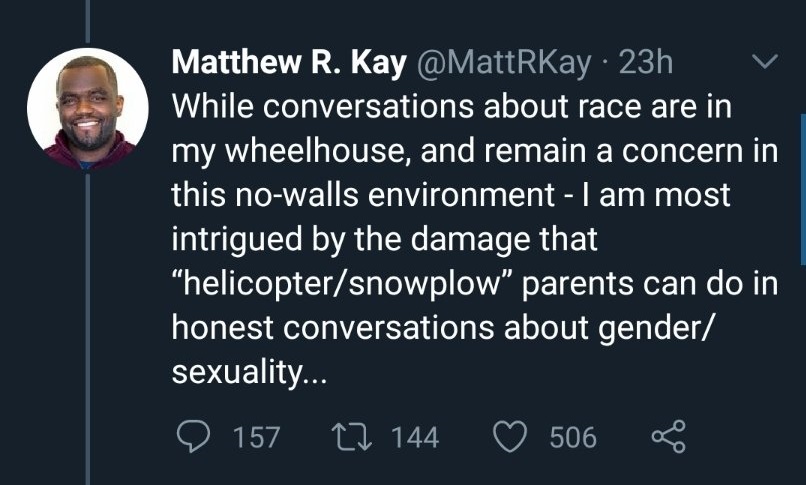 No-walls environment? Except he doesn’t want others peering in?

And what of his description of involved parents? He refers to parents who pay attention their children’s educations as “helicopter/snowplow”. The implication that parents should leave the education to the experts.

Wake up America. Schools no longer teach, but instead indoctrinate. And the people who call themselves “teachers”, should admit that their real title is “indoctrinator”.

In the last comment in the thread, Ray admits that “Conservative” parents represent his chief concern:

And while “Conservative” parents are my chief concern – I know the damage that can come from the left too. If we are engaged in the messy work of destabilizing a kids (sic) homophobia or transphobia – how much do we want their classmates’ parents piling on? 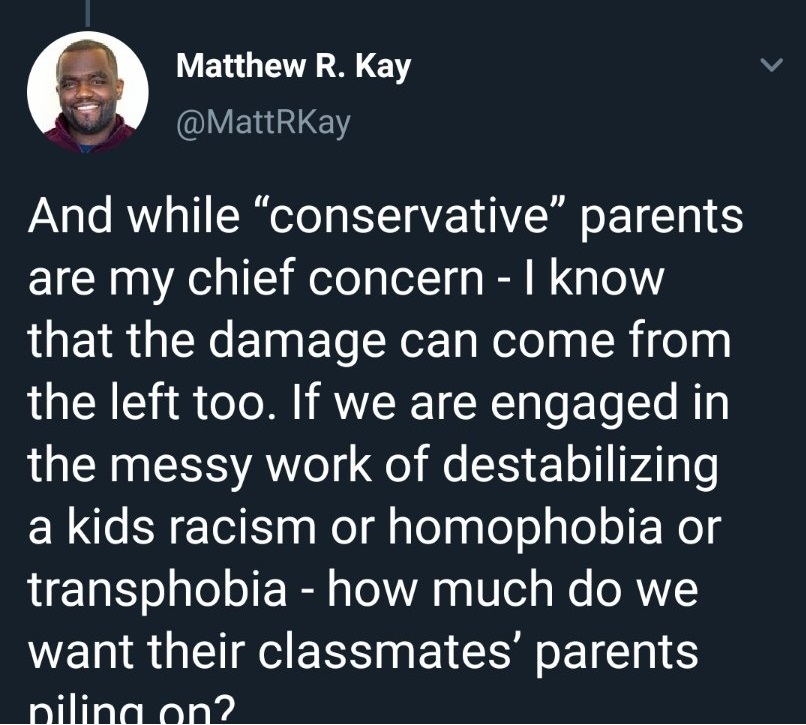 But he admits much more. Ray intimates that his school is in partnership with the Left. But he doesn’t need them “piling on”. Because his school is already firmly entrenched with the Leftist agenda. Any piling on might expose the radical agenda.

Who is Matthew R Kay?

Matthew R. Kay is a proud product of Philadelphia’s public schools and a founding teacher at Science Leadership Academy.

He believes that any teacher who is willing to put in the hard work of reflection can, through the practice of discrete skills, lead meaningful race conversations. Driven by this conviction, he is passionate about designing professional development that teachers find valuable.

Matthew lives in Philadelphia with his wife, Cait, and his daughter, Adia Sherrill.

A founding teacher at the Science Leadership Academy teaches about meaningful race conversations?

He wrote a book about it. 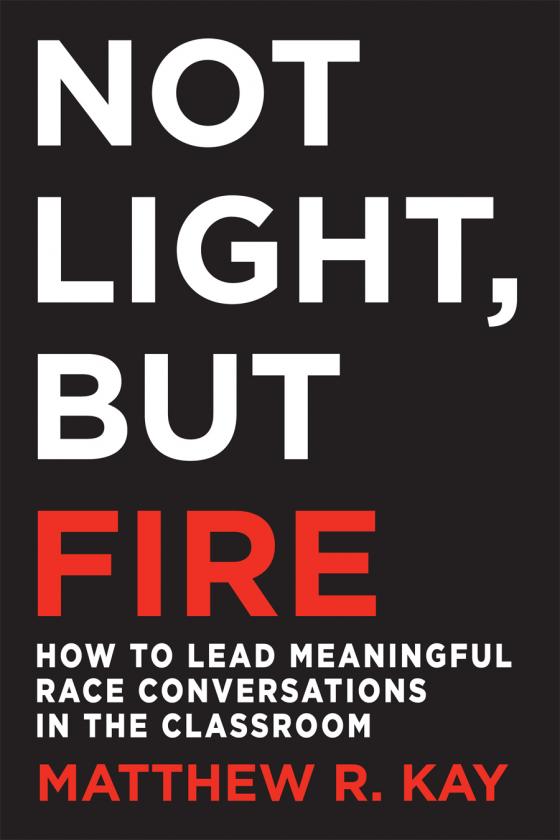 Another site describes Kay’s teaching method as “an innovative inquiry-driven, project-based curriculum…He deeply believes in the importance of earnest and mindful classroom conversations about race.”

Sure. Inquiry-driven race from only one perspective.

As a person with degrees in Electrical Engineering, Computer Science and Math, I have a difficult time understanding what the heck race has to do with teaching science?

The education system needs to shift focus from its decades-old social engineering and return to teaching. We have plenty of evidence that the Leftist techniques serve no purpose, unless failure and humiliation are the goal.