I didn’t watch President Trump’s town hall with ABC. But I did see a few comments in my Twitter feed. Most asked why Trump would agree to such an event.

I responded, “Because Trump has BALLS!”. He will take the fight to the enemy, something Biden would NEVER do. And that’s why Biden will never be president.

Anyway, one of my friends tweeted one of Stephanopoulos’ comments:

@GStephanopoulos: “Our next question comes from Diane, she’s the president of the Delaware Valley Young Socialists Club and is an undecided voter…”

I spewed soda through my nose, that tweet cracked me up so much. Think Stephanopoulos is too stupid to realize that a young female from Joe Biden’s home state who is also president of a socialist club might actually be decided?

Of course he knew. And instead of celebrating a president willing to answer all questions in a hostile environment, ABC chose to try to set Trump up.

Clearly, ABC chose Leftist shills as questioners. Not that I needed any evidence other than the event was hosted by ABC, and Bill Clinton’s former staffer was the moderator.

During President Trump’s town hall event on ABC hosted by, George Stephanopoulos multiple voters were disguised as “uncommitted voters.” However, it has been discovered that ABC mischaracterized the voters that asked loaded biased questions during the event.

ABC claimed that Ellesia Blaque, Kutztown University professor was an “uncommitted” voter during the town hall however, she’s Kamala Harris supporter. In a Twitter post dated January 28, 2019, Blaque celebrated Kamala’s announcement and that she would be “volunteering.” 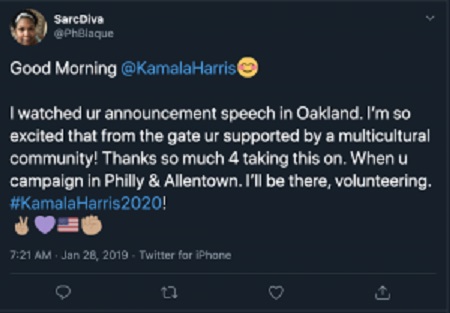 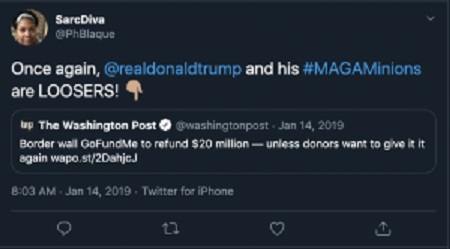 She is a self-described “liberal Democrat,” according to her Facebook profile, on the grounds that liberals “are not motivated by money or power, but by humanity and the needs of the people.”

The next “uncommitted” voter is Philadelphia pastor Carl Day, who posted on August 11, 2020 (just weeks before the town hall) that he’s “never once supported trump and won’t now.”

During the town hall he challenged the President’s over his campaign’s Make America Great Again slogan which he has referred to several times on social media. According to Day, MAGA refers to a time when “the n*****s did what they were told in all industries, wouldn’t have the audacity to try to enter a white establishment and didn’t talk back to the cops.” The pastor has also called Trump a “villain,” claiming he’s “ridiculously arrogant & obnoxious,” and said he “ain’t no Christian” in posts spanning from 2015 to 2019.

He was no match for President Trump. Check out Trump’s response:

ABC KNEW these people were not uncommitted. But they still went with this fake news narrative. However, what ABC fails to recognize is that their lack of balance has consequences. They think they’re one up on Trump. Instead, the dishonesty feeds America’s lack of trust for the media.

In other words, don’t drink the Kool-Aid.

According to a recent article by The Hill, just about nobody trusts the news media these days.

I realize that this is hardly “breaking news.”

A lot of us figured out a long time ago that many journalists had a political ax to grind. And that bias typically flows in just one direction. But these latest numbers are pretty bad. Eighty-six percent of Americans say there is either a “fair amount” or a “great deal” of political bias in news coverage. That’s astounding. Nearly nine out of every 10 Americans think journalists slant the news.

Consider this little song and dance:

The Times wasn’t alone. The Associated Press and the Los Angeles Times described Harris as “centrist.”

On television, ABC’s George Stephanopoulos said that “Kamala Harris comes from the middle-of-the-road, moderate wing of the Democratic Party.”

Maybe Harris is a moderate or a centrist as far as liberal journalists are concerned, but that’s not how a nonpartisan group that tracks congressional legislation sees it. An analysis by GovTrack.us concluded that, in 2019, Harris was the “most liberal” of all 100 U.S. senators, based on the legislation she signed on to.

That means the group found her even more liberal than Sens. Bernie Sanders (I-Vt.) and Elizabeth Warren (D-Mass.). Yet, major news media outlets today are calling her “moderate” and “centrist.”

So we have fake questions for Trump. And fancy new labels for Harris. I guess leftists are so used to the lies, they don’t even bother to cover them up anymore.