For those who wonder how Biden is received around the country, wake the hell up. The former Vice President and Democrats’ brain-damaged candidate is a joke.

What more evidence do you need? The guy shows up to something, and he has people on cell phones BEGGING for people to come out. How do you manufacture enthusiasm when the definitive evidence is in your face?

I warn Democrats that ballot-harvesting will be difficult given they won’t be able to find anybody willing to admit they voted for Biden.

Check out this video of Biden’s failed photo op as he delivers pizzas to firefighters.

From the moment Biden exits the limo, he is heckled. Partial transcript:

Heckler: Hey Joe, you finally got out of the basement. Who’s for fracking now?

How about that crime bill you had?

What did you do for the last 47 years?

This guy hit many of the key issues on Biden. And all Biden could muster was, “Don’t jump”?

No challenge to a fight or a push-up contest? That guy was an obvious “lying dog-face pony soldier”, right?

For Democrats with high hopes, you witnessed Trump’s mini-me destroying Biden. So what do you think will happen in an actual debate?

Interestingly, this photo-op lasted less than 3 minutes. Now I’m not sure what advance work Biden’s team does, but imagine if Trump were doing this type of an event. That place would have been packed. Trump couldn’t walk 3 feet in 3 minutes. But for Team Biden the entire thing was over before Trump would have finished shaking hundreds of hands, sans mask by the way.

Look at the contrast when Trump flew into Pennsylvania the other day. His plane was greeted by thousands of supporters. 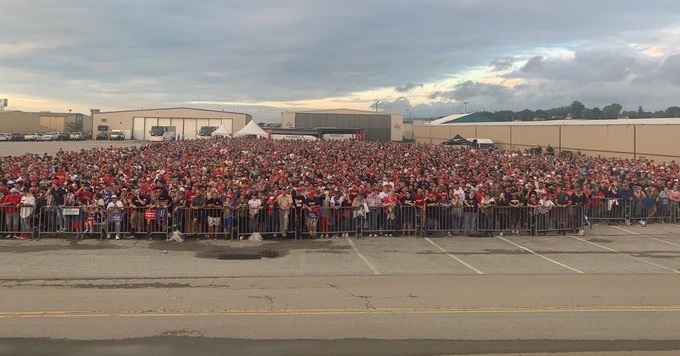 These people lined up several hours ahead of the rally and stood in the pouring rain. I’d love to see footage of people doing this for Biden.

Just look at the excitement for Trump, as he prepares to speak to people in PA.

Crowd roars as @realDonaldTrump touches down in Latrobe, PA. pic.twitter.com/vc0RDyA9XB

Democrats know there is no enthusiasm for Biden. And it can’t even be faked.

So bring on the ballot-harvesting, mail-in vote fraud, dead voters, illegal voters, Russian conspiracies and so on. Nothing will stop the Trump train.