Yesterday a notification popped up on my phone. Apparently, Biden’s campaign closed up shop by 9am.

That means Biden didn’t have anything on his schedule. No door-to-door knocks, no speeches, no press releases. Not even a Facebook live. So what’s he doing these days?

It’s apparent that Biden’s people hope his ads can do the talking for him. Because he’s not too good with the teleprompter, and he’s even worse impromptu. Heaven forbid this guy commit something to memory and stick to it.

As of this writing, we’re just 39 days from the election. (Personally, I say we’re also 39 days from the pandemic end-game. But who am I to speculate?) Typically, a campaign is driving hard in the final days such as this.

I get it, Democrats are social distancing and living online instead of in person. Still, Biden’s efforts are lackluster, at best.

Fox News was too kind in their assessment of Biden’s campaign.

The final stretch of a presidential campaign is typically a nonstop mix of travel, caffeine and adrenaline. But as the worst pandemic in a century bears down on the United States, Joe Biden is taking a lower key approach.

Lower Key? Let’s get real. Democrats are trying to keep Biden on a leash. Because every time Biden makes an appearance, a new gaffe circulates the internet.

Laying low is Biden’s only hope!

If Biden supporters still think Biden has a snowball’s chance in hell, here’s a little side by side to illustrate just how much Trump out-performs Biden.

Since his Aug. 11 selection of California Sen. Kamala Harris as his running mate, Biden has had 22 days where he either didn’t make public appearances, held only virtual fundraisers or ventured from his Delaware home solely for church, according to an Associated Press analysis of his schedules. He made 12 visits outside of Delaware during that period, including a trip to Washington scheduled for Friday to pay respects to the late Justice Ruth Bader Ginsburg.

During the same time, President Donald Trump had 24 trips that took him to 17 different states, not counting a personal visit to New York to see his ailing brother in the hospital or weekend golf outings.

Fox threw in Trump’s visit with his brother and a few rounds of golf. But what did they skip? Let’s just make a list.

Trump has been busy running the country. The epic pandemic certainly consumes much of his time. He handles his day-to-day duties and still manages to hold Trump rallies and fight off Democrat declarations of war. Obviously, we don’t have to go over the whole list of Trump accomplishments. We know he’s achieved incredible milestones in unemployment, growing our manufacturing, boosting the economy, equalizing trade, I could go on and on…

I think you get the picture. But if you need more examples, click here.

I’d like to challenge Biden to make his own list. He’s got 50 years of politicking under his belt. Yet, I’m willing to bet his list of accomplishments doesn’t fill up a piece of paper. 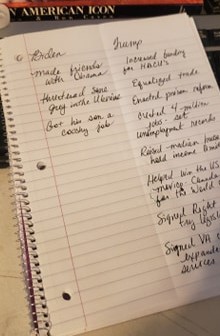 In fact, I took pen to paper and this is what I got… but I decided to give up after one page because Trump’s side was way too much to write out.

Meanwhile, I think we should make another list. We’ll call it the list of excuses for Biden’s poor showing.

His latest excuse claimed Biden was honoring covid-19 protocols. I sure hope his people buy that. It would be sad if even Democrats avoiding voting for Creepy Joe.