If I were President Trump, I’d be doing a victory dance all the way around the Oval Office. Once again, Democrats are guilty of the accusations they throw at Trump and the GOP.

Ripples from this bombshell will spread far and wide. Because Tucker Carlson just nailed Chris Cuomo to his coffin.

It’s well known that loose lips sink ships. And that’s what ultimately puts Cuomo in the hot seat. He couldn’t keep his mouth shut. Worse, Cuomo bragged to the most unscrupulous lawyer on the planet.

In a secretly recorded conversation between Michael Cohen and Chris Cuomo, the CNN anchor admitted his frustration regarding a particular line of questioning.

Take a listen for yourself:

in the tape, Cuomo complains to Cohen about rumors that he’s forced himself on woman and complained about him making them feel uncomfortable. pic.twitter.com/DcROw88038

The Media is Not Your Friend!

Cuomo got that right. The media will toast you any which way they can. And you know what they say about karma. What you send out into the world circles back to you. Now we have Cuomo’s real thoughts on display.

But as Cuomo said it:

“Guys calling and saying ‘I heard he was the Charlie Rose of ABC; used to invite women to the hotel and open his bathrobe.’ Do I look like the kind of f*cking guy who’s gotta do that?”

But I don’t call that a bona fide denial. In fact, to be clear, Cuomo admits to the accusations.

As we continue to pick this apart, notice Carlson said “we’re going to air one little piece” of these “tapes.” That surely implies Carlson has more. Perhaps he plans to roll these tapes out one morsel at a time.

CNN is in a tight spot, thanks to these recordings. By their own standards, every accuser deserves to be whole-heartedly believed right out of the gate. In fact, #MeToo demands perpetrators be “guilty until proven innocent,” as this type of behavior is especially traumatizing.

Do leftists want to play by their own rules right now, or are they already fishing for a loophole?

Should the women who apparently accused Chris Cuomo of sexual harassment just be dismissed? I thought we were supposed to “believe all women”? CNN should give them a platform to tell their stories. They have a “right to be heard and believed,” after all.

Obviously the questions are circling Cuomo like flies in a pig pen.

Cohen’s only defense to this madness is to say “Trump didn’t have my permission to leak this information.”

But I’m willing to bet Cohen himself is the leaker. Why? Because there’s no such thing as bad press when you have something to sell. And Cohen is peddling another leftist manuscript.

I’m guessing leftists have learned their lesson about these book tours just yet. Hillary tried to make a few bucks off her ‘classy manuscript’ titled: What Happened. Understandably, she ended up giving the book away as sales were bleak. Then we have Comey’s “A Higher Loyalty.” Even Michelle Obama threw a book out there. Do you see a pattern here? Leftists feel vindicated if they can just get someone to publish their bullsh*t.

Cohen is no different.

The only people in possession of these recordings are me, @DOJ, @POTUS & Trump Org. I did not give this recording or authorization for its use to @FoxNews or anyone. @POTUS and cronies violated my First amendment rights and now this; all to discredit me and my book. What’s next? pic.twitter.com/ajgmpE9ZoF

But here’s an interesting little tidbit. I was curious to read the replies to Cohen’s tweet. I wondered where the majority stood in regards to Cohen’s monumental back-stabbing.

Surprisingly, I was given a pop-up warning. According to Twitter, Cohen opted to hide certain replies. This new feature allows people to edit the narrative as it unfolds in their feed.

However, hiding those replies doesn’t actually remove them. So, when curiosity got my cat, I clicked on the link to view the hidden replies. To be honest, I expected a full-blown rant decorated with curse words that would make a sailor blush.

Instead, this is what I found: 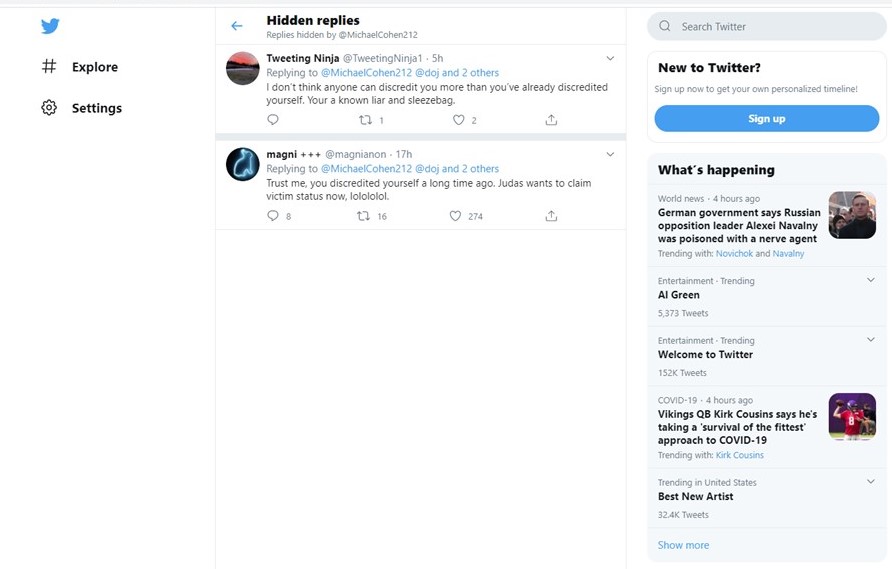 From where I sit, those are pretty benign disagreements. Although, I agree 100%, Cohen disgraced himself. And he didn’t need any help doing it.

Still, I find it interesting that Cohen hid those statements.

Is he afraid too many people would agree? And for the record, I’ve seen far worse on Trump’s page. And I’ve never come across the “hidden reply” message before.

Perhaps Trump has thicker skin. Or maybe Cohen’s just a toddler in man clothes. Actually, now that I think about it, both statements are true. Trump welcomes the opposition. Even if they are still in diapers. Meanwhile,  Cohen can’t sit in the hot seat for very long. And I have a feeling that Carlson has a few more surprises up his sleeve. Looks like Cuomo’s career will soon burst in flames. Maybe we can get a two-for-one and rid New York of his leftist brother at the same time.