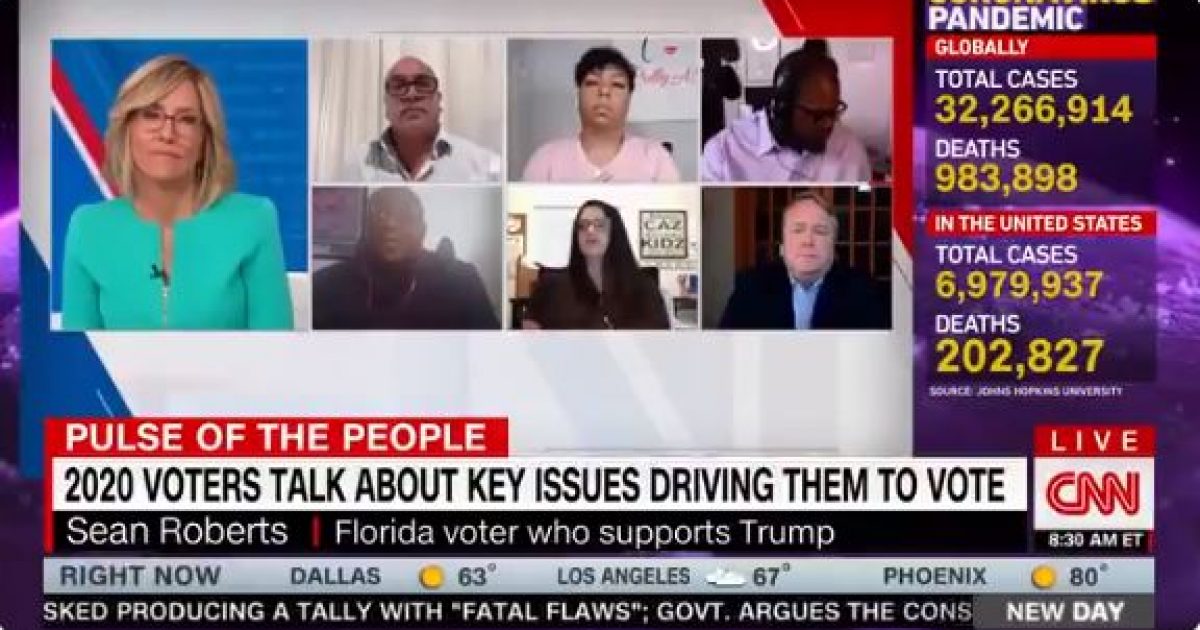 Democrats search for any lifeline in gaining back the presidency. Thus, the Father of Fake News, CNN keeps asking various formerly anti-Republican demographics to give them hope.

Such was the case when CNN host Alysin Camerota discussed their vote in a recent segment on her show. One can clearly see the strain with Camerota, as she gets responses.

“He’s doing a phenomenal job and he has my vote. Absolutely.” pic.twitter.com/4RBYFC36ZW

At about the 0:22 mark, watch as Camerota blinks so fast she blew the cameramen backwards.

Fast blinking is a sign of stress. And clearly these responses stressed Camerota out.

Apparently Sean Roberts, a Black Florida voter caused Camerota to lose it when he said, “The president is making every effort to do his best for people of color…the president is bringing us together.”

Before I discuss the next CNN guest, notice what’s on the right side of the panel. See the Wuflu statistics?

Total cases of Wuflu around the world and total deaths. Then the same statistics for America.

This fake news despite the CDC admitting that only 6 percent of these deaths are directly related to the Wuflu.

The next supposedly anti-Trump demographic was a young woman named Alexis Frost Cazimero. This Latina from California declared:

“He’s doing a phenomenal job and he has my vote. Absolutely!”

I will give CNN credit, as they appear to have gotten a cross-section of people for this panel. Unlike ABC’s recent Town Hall with President Trump where Stephanopoulos and team stacked the deck with anti-Trump “uncommitted” questioners.

Signs are all around Democrats, but they refuse to see them. Like the loss of CA-25, where a Republican defeated the Democrat challenger by a wide margin.

I agree with Christy Waters about the look on Camerota’s face.

My favorite part of this video is the look on Camerota’s face.

In keeping with the theme of Camerota’s face, Missy B tweeted:

I’m still in shock that they even showed this and did not cut the guests off. Her face is awesome though!!!!

I’m still in shock that they even showed this and did not cut the guests off. Her face is awesome though!!!!

I too am shocked that CNN didn’t cut these guests off. Obviously more than one person was pro-Trump. Not having seen the whole segment, I must wonder how many more of the panelists were pro-Trump?

One of my favorite tweets on this came from “@builtitagain20” who tweeted:

At this point, if someone is still an undecided voter, they are really just a liberal who is struggling to reconcile their beliefs with their conscience.

At this point, if someone is still an undecided voter, they are really just a liberal who is struggling to reconcile their beliefs with their conscience.

How true is this comment! You simply can’t vote for Biden or any Democrat in good conscience.