Democrats are reeling over their failed attempts to get Trump. And that list of attempts is longer than a Polish last name.

When considering the more egregious acts against Trump, I consider Obama’s weaponizing the DOJ first. That, and Trump still kicked their sorry asses. What a revelation to Obama and team!

Democrats hand-picked Trump as their challenger, then realized they couldn’t beat him after targeting him with the entirety of a crooked DOJ at their disposal. And they said Obama was smart? Incompetent offers a far better description.

Trump beat Obama and his entire team of Deep State minions. He dismantled their machine, drained the swamp, and sold the property on Ebay for a fat profit!

This motherfu…Dude is Superman, as far as I’m concerned!

Still Democrats tried their next tactic: an attempted impeachment.

And these Leftists clowns were bold about it. Democrats knew of Obama’s ongoing planned coup of Trump. I’m sure that Obama tipped them off to the game, assuring them that his crooked spy agencies were focused on Trump. So Democrats openly admitted to the impeachment from Day One.

But their boldness hit new heights, when they actually accused Trump of what Biden actually did.

Below is Biden bragging about withholding funds from Ukraine if they didn’t stop the investigation into Hunter Biden:

America saw through this nonsense. Worse for Democrats, America recognized that Joe Biden was the person who should have been charged with a crime. And this isn’t over.

Trump won this battle, and he will also win this war.

Nonetheless, Democrats remained undeterred. They waited for their next opportunity, and it came with a misfortune cookie.

To the delight of the Democrats, the Chinese flu hit America.

It was time to torpedo Trump’s amazing economy. In a matter of a couple of months of planning, Democrats managed to take the stock market from over 29,000 to under 19,000. The market gave back all its gains from the Trump era.

Further, unemployment ravaged the economy. And this was all planned as Democrats loudmouth Alexandria Ocasio-Cortez pointed out in her since deleted tweet. 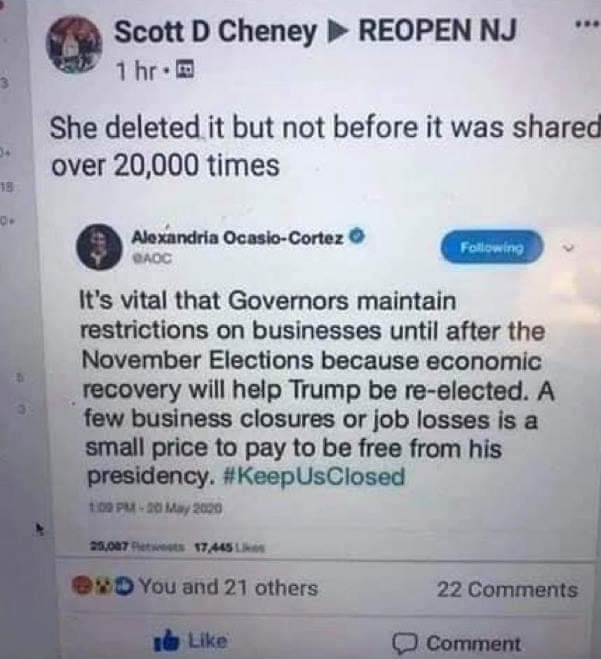 The strategy shifted to “blame Trump” for the Chinese virus. As if Trump, et al., didn’t see that coming. #Fail.

Americans saw through the ruse. And while Democrats were plotting their next gambit, Trump rebuilt the economy quicker the second time.

But if you think “blame Trump” didn’t work before, don’t think that stops Democrats from “rinse and repeat”. Their latest “blame Trump” strategy may be their best, as in their worst.

As The Washington Times reported, Democrats want to blame Trump for unrest in cities:

“The simple reality is that we are seeing more and more chaos and violence under the Trump presidency, and there’s no reason to expect that it would get any different or any better if he were reelected,” Mr. Buttigieg told Fox News anchor Bret Baier.

National Democrats have largely avoided commenting on the arson, looting, window-breaking and assaults plaguing major U.S. cities, including Chicago, Minneapolis, Seattle and Portland, Oregon, all of which are controlled by Democratic mayors in states led by Democratic governors.

Columnist at the National Journal tweeted:

“On the burned-out streets, without a script, from the heart, Biden should speak to the city and the country. He should speak for justice and for safety, for reform and against riots, for the crying need to bring the country together.”

“On the burned-out streets, without a script, from the heart, Biden should speak to the city and the country. He should speak for justice and for safety, for reform and against riots, for the crying need to bring the country together.” https://t.co/fTqrqSlHuk

Democrats need to denounce & local officials need to act against mobs & violence on the left. One idea (mine, not @Tracinski‘s): Biden could call Lauren Victor, the woman dining in D.C. who was surrounded by a howling mob, to express sympathy and support.

Democrats need to denounce & local officials need to act against mobs & violence on the left. One idea (mine, not @Tracinski's): Biden could call Lauren Victor, the woman dining in D.C. who was surrounded by a howling mob, to express sympathy and support. https://t.co/V0UxZooosN

In short, many Democrats and anti-Trumpers are panicked over what’s happening. They KNOW that middle of the road Americans have lurched right, after witnessing Democrats’ lack of leadership in dealing with these riots.

No longer can the media refer to riots as “peaceful protests”. And with every passing day, Trump gets vindicated.

But Democrats have no way to recover. They are the party of Defund the Police. Democrats appease rioters and looters at the expense of law-abiding citizens.

No matter how hard they try, Democrats won’t win this PR battle. Leftists control every major city in America. And some mayors are buoyed by Leftist governors. Moderates and Left-leaning Democrats now see the errors of their ways. I predict many will vote for Trump.