In these times of troubled turbulence, one couple rose to household name status as they are crucified on the left and exalted on the right.

Everyone knows the story of the McCloskeys. Their claim to fame is that they decided to defend their own property. I know, how dare them. A group of terrorists went for a walk down their street, and the McCloskeys made sure their home was unscathed by violence. And what did they get in return? Arrested. 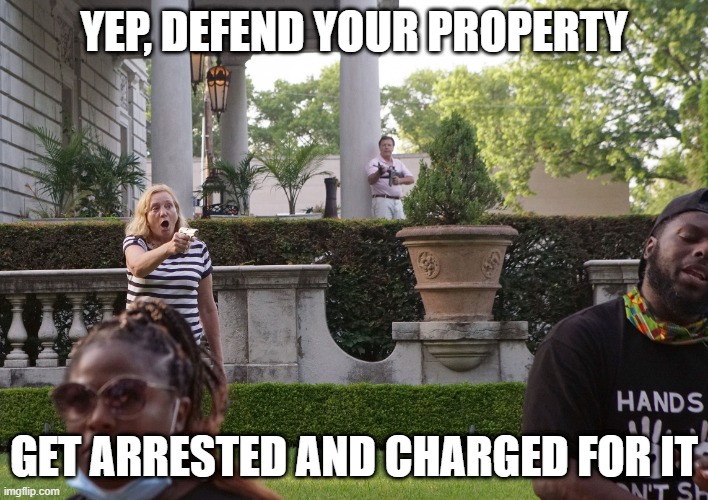 That’s the story we already know. But now, we get the rest of the story. Turns out, prosecuters jumped the gun. And then, they didn’t know what to do next!

According to KMOV4 in St. Louis:

…for the first time, News 4 is getting a rare look at what went on behind closed doors in the days leading up to charges being filed against them. Through an anonymous source, News 4 received a series of emails, text messages and a voicemail exchanged in the days and weeks leading up to Mark and Patricia McCloskey being charged for what happened at their home in the Central West End.

“Curtis, you need to call me back, I wrote a long email to you trying to ask a bunch of questions, about what you said, some of it was [expletive]. ‘Now we need to straighten this out, because I am about done with this crap,” Hinckley said.

Burgdorf is the lead investigator on what happened at 1 Portland Place on June 28. Since then, prosecutors charged the McCloskeys with exhibiting weapons and nine people have been issued citations for trespassing on private property.

Emails were exchanged between Burgdorf and Hinckley the very day after the incident.

By July, Hinckley was requesting additional follow-up work, including a search warrant to seize the McCloskey’s guns. On July 9, he wrote, in an email, “They are not going to want you guys rooting around their beautiful mansion. So, I suspect they’ll give them up.”

Of course the McCloskeys will give up their guns. That’s what law-abiding citizens do. They comply with the laws. And here’s the kicker, her gun was merely a prop.

Mark McCloskey’s rifle was taken by police from the home. The handgun Patricia McCloskey had was in attorney Al Watkins’ possession and turned over, in front of News 4’s cameras.

Hinckley wrote to Burgdorf: “Why the [expletive] does Watkins have the handgun?” and writing about Watkins “that guy is a slime ball, by many accounts.”

Of course, there are plenty of cordial exchanges. In fact,

At one time, Hinckley wrote “Curtis-be careful in general. Our phones and Twitter started lighting up last night. Several credible threats on Kim,” referencing Circuit Attorney Kim Gardner and saying he was passing information about the threats to the FBI.

But Hinckley got heated over the probable cause statement, outlining the charges against the McCloskeys.

Burgdorf created a list of 14 “reservations” about how Hinckley had written it, claiming they weren’t factual, including the use of the term “assault” rifle, which Burgdorf said was a “propaganda” term.

Hinckley responded: “I’m more than willing to remove the term but in alleging I’m using propaganda you’ve crossed a line, If anything, your changes, conduct and unexplainable edit in the PC strongly hint of bias or agenda.”

That’s not how Joel Schwartz, the McCloskeys’ defense attorney, sees it.

“In this particular case, a line was crossed, a line was blurred and it created the appearance of impropriety which is why I believe the CAO should not be the office handling this case,” Schwartz said Monday. He argues the prosecutor’s office has a conflict of interest, in part because of Hinckley’s conduct and also because Kim Gardner’s recent campaign referenced the case in fundraising efforts.

“There is no doubt, they were pushing it forward. There was a sense of urgency and the urgency was called the primary election in the City of St. Louis.

Surprise, surprise. An election influenced justice. Could there be a more cliche’ case of leftism? Nevertheless, it will be pretty interesting to see how this all pans out.