Too many Democrats have left the Party of Lynching Negroes to count. And it’s Biden and the Democrats’ fault.

I contend there is not a single special interest group that Trump lost in 2016 that hasn’t lost members to Trump. Blacks, Latinos, youth, Christians, and others have all left the Democrats and now fully support Trump. This includes big name Democrats.

Yet, when you Google “Democrats who didn’t support Biden”, here’s what you get. 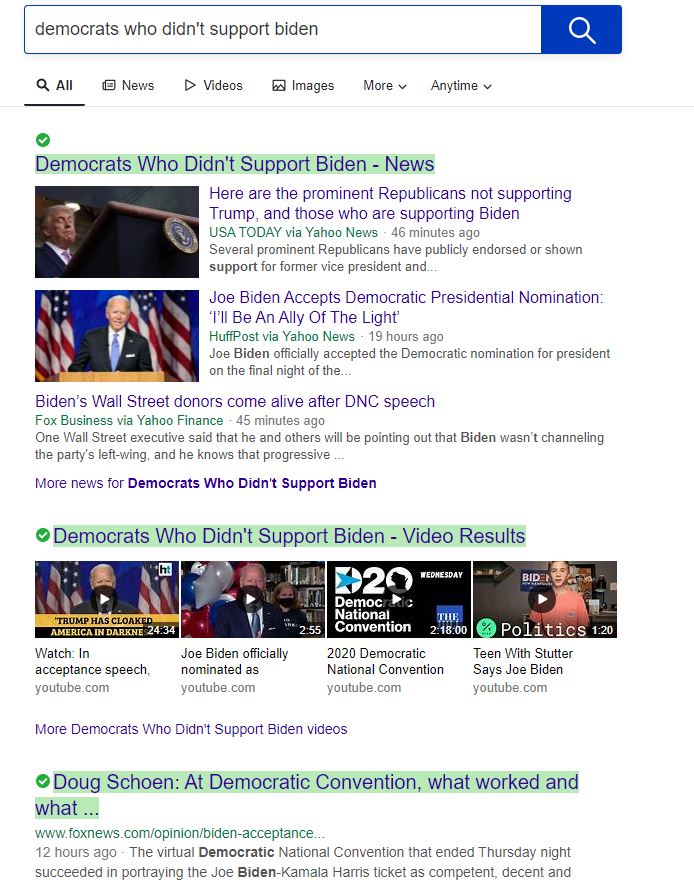 Not a single story about Leo Terrell or Vernon Jones. Two prominent black Democrats who have publicly stated they are voting for Trump.

Instead, the Leftists social media giant has the nerve to mention “prominent” Republicans not supporting Trump.

Let’s see, Kasich, Romney, Bill Kristol, and George Will. These guys are like “blacks killed by cops”. The same RINO clowns mentioned to try to give credence to the anti-Trump Republican nonsense.

Trump has anywhere from 92 to 95 percent approval by Republicans. Still Democrats trot out their token RINOs. Anything to keep from looking at their own candidate.

Interestingly, the most prominent Democrat who didn’t want Biden was his former boss.

According to reports, Obama warned Democratic strategists that Biden represented a potential problem for the party’s 2020 White House aspirations. And if anybody knows the dirt on Biden, it’s Obama.

More than one Obama administration minion has discussed Obama’s lack of confidence in Biden.

One Democrat who spoke to Obama recalled the former president warning, ‘Don’t underestimate Joe’s ability to f*** things up.’ Speaking of his own waning understanding of today’s Democratic electorate, especially in Iowa, Obama told one 2020 candidate: And you know who really doesn’t have it? Joe Biden.”

A similar opinion was voiced in The New York Times last year. They reported that  Obama told Biden, “You don’t have to do this, Joe, you really don’t”. Afterwards, he added that he ordered officials from Biden’s campaign to make sure that Biden didn’t “embarrass himself” or “damage his legacy” during the 2020 presidential campaign.

But that’s not all.

Additionally, Jake Tapper of CNN reported that an official from the Obama-Biden administration confided,

“Biden’s strength has never been his clarity of message or his delivery. But watching his long, winding answers that don’t really make sense in recent debates has also raised the question as to whether that has gotten worse and whether he is up for this.”

Recall Biden ran scalded from Iowa and New Hampshire. Then it took Jim Clyburn to pay off enough of the Silly Negro vote to give Biden the push necessary to gain traction. But what did this get Biden? Not much.

Even when Biden ran unopposed in primaries, he showcased pathetic results.

Helped by a party that seems unified behind him, Joe Biden leads in our current estimate of the Electoral College — the only count that will matter — as his nominating convention begins. The CBS News Battleground Tracker model has Biden up in states worth 279 electoral votes, slightly more than the 270 needed to win in November. To be clear, that doesn’t mean Biden will win. This is now.

Democrats will never surrender, so they will amuse themselves with fake news polls. But the inner circle for Democrats know Biden has no shot.

I believe wholeheartedly that Leftist elites detest Biden. Why else would they keep deluding the man?

Running Biden embarrasses the Democrats. However, the Party can weather the long-range impact. But Biden can’t.

His resume was as good as it could be as Obama’s idiot VP. But to become a three-time loser and Obama’s idiot VP isn’t the way Biden should exit politics. Too late, I suppose.