Last week, we experienced one of the most intense dial-down on Democrats to date. And what do they have to say for themselves?

The Russians did it!

Yes folks, when faced with proof that nails Hunter Biden and his dear old dad to the wall, Democrats had no excuse left. Thus, they went for a replay. Now, leftists face a huge problem, because that dog just won’t hunt.

But Adam Schiff isn’t giving up yet. In fact, he’s hoping to convince liberals the Russians are the masterminds behing this. Because if he can sell this narrative to enough buyers, he could put Biden back in the Oval Office.

Nice try Crazy Eyes, but we’re on to you.

Ratcliff is right, the American people see exactly what’s happening. Why else would the “Walk Away” movement be spreading like wildfire? 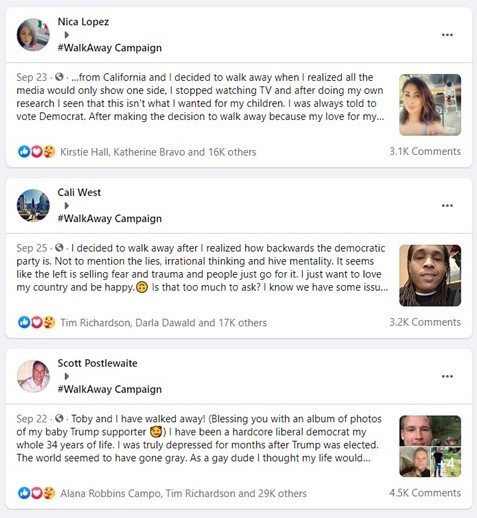 Every single day stories cross my desk. These testimonials of hard-core democrats willing to throw away their entire belief systems rest solely at the feet of the crooked elite. Pelosi, Schiff, Schumer, Obama, Waters, the Clintons, Comey, the list goes and on. And the Bidens are certainly front-runners. The funny thing is, Creepy Joe can’t actually remember what lies he’s told where and to who, so things are falling apart.

Now, Biden is so scared of what comes next, he’s ordered a complete black-out.

Twitter feeds claim Biden is so desperate to do damage control that he has no idea what to do. So, he’s called for silence. Four days of no media, when the election is fifteen days away! This is unprecedented.

As Kevin Jackson put it,

The Hunter Biden story undoes all the scandals of the Obama administration.

After all of former Vice President Biden’s protestations, we learn he knew about Hunter’s crooked deals. Worse, Joe Biden got his nest feathered by crooked money as well.

Convicted felon doesn’t look good on the resume for Leader of the Free World. And it doesn’t help that Biden’s son is a crackhead. Do I really need to remind people of the goodies offered to Hunter Biden, the bona fide crackhead?

I think it’s safe to say the next two weeks will bring something new to the surface every single day. And while Democrats totter between denial and hiding, Trump will secure his second victory.

Of course, Trump didn’t need this scandal to win. But it does make the margins more exciting.