The Military Industrial Complex vs Trump

A ‘Farewell To Arms’

President Eisenhower (a retired 5-star general) warned us in his 1961 Farewell Address:

As part of the Arms Race during the Cold War, an unholy alliance developed between private industry and the top echelons of the US military.  This created a mega-juggernaut that ultimately bankrupted the Soviet Union and brought the nation down from within.

However, with the Soviet menace gone, new adversaries were needed to continue the rollout of 21st century weaponry that had been displayed during Desert Storm in 1991.

The classified documents indicate that the leadership of the Defense Department has instructed the military chiefs to request forces and weapons sufficient to fight at least two large regional wars simultaneously, one against Iraq in the Persian Gulf and one against North Korea, while also being ready to conduct a major military campaign in Europe to prevent a resurgent Russia from pursuing expansionist aims. Coups and Plots

In addition, the documents call for a strategy to deter the re-emergence later in this decade of a global “adversarial rival” or “international coalition with an aggressive expansionist security policy.” To do this, the United States would have to maintain a “technological” and “doctrinal” edge “and a credible capability to expand military forces.”

The planning described in the documents does not mean that any of the conflicts described are inevitable or imminent, and the Pentagon itself calls the scenarios “illustrative” and “not predictive.” Given current circumstances, many seem improbable. Iraq, for example, seems years away from rebuilding its military forces to the point where it could seriously threaten its neighbors with an invasion, although its remaining nuclear ability remains a source of concern.

Thus, America’s arms industry shifted gears, one from singularly focused on outwitting the Soviets for victory, to one of profit margins.  What would evolve is a symbiotic trifecta of ‘Government’, ‘Bureaucracy’, and ‘Private Sector’; otherwise dubbed “The Iron Triangle”.

The late-William Safire defined the Iron Triangle after one of then-Presidential candidate John McCain’s tirades in a March 2000 New York Times story:

Senator John McCain is also partial to a metallic metaphor. “I’ve taken on the iron triangle: special interests, campaign finance and lobbying,” he said in mid-February. A few weeks earlier, his definition was formulated slightly differently: “The establishment obviously is in a state of extreme distress, if not panic, because they know I have taken on the iron triangle of money, lobbyists and legislation.”

After being asked frequently about McCain’s symbol, he was readied with a colorful reply. “If a man says, for example,” said Bush, undoubtedly alluding to the man as McCain, “that there’s an iron triangle in Washington, D.C., of lobbyists and special interests, and he’s ringing it like a dinner bell to raise money for his campaign, I think that I have a right to point out that he says one thing and does another.”

McCain left the media out of his iron triangle, substituting “money,” so that his three corners are now “money, lobbyists and legislation.” 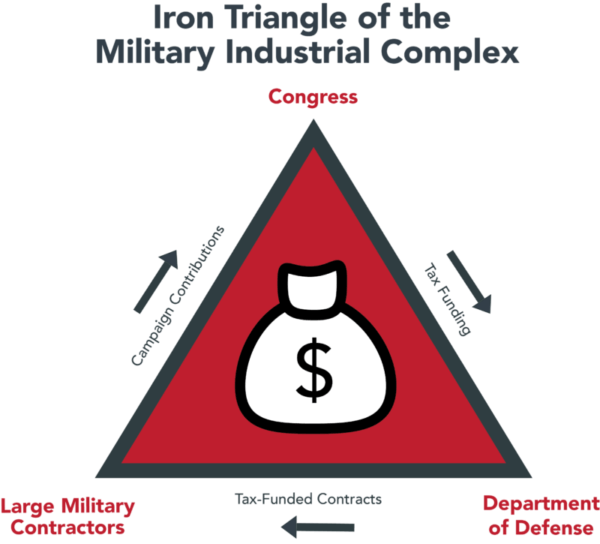 Its become a political ‘revolving door’ that has come to define ‘The Swamp.‘

When a specific political party is out of power the loyalists goto work on K St earning six-figures until their party returns to power.

The Center for Strategic and International Studies outlined the of the Iron Triangle amongst government defense hierarchy:

The structural reality reflected and revealed by this data is the seemingly unavoidable iron triangle of painful trade-offs (hereafter ITPT). The geometry of the ITPT drives the DoD to maintain a reasonable balance among three factors: preparing to be ready today (readiness), preparing to be ready tomorrow (investment), and sizing the force (structure). As long as the U.S. military is operationally engaged today, squeezing readiness and structure too tightly seems irrational, and investments for the future are the costs most easily deferred. Like a prisoner’s dilemma, defense strategists face the paradox that this is a worst-choice strategy for long-term U.S. military preeminence.

One can nuance the edges of this dilemma, but for the most part, the ITPT forecloses radical changes in defense strategy.

As an example, a serialized story about the design and development Bradley Fighting Vehicle served as the plot for the 1998 movie “The Pentagon Wars“:

Then Along Comes Trump

Obviously, in 2016 Donald Trump disrupted the entire scheme when he won the presidency.  He did not fill a majority of his appointment positions with career DC insiders, to the disdain of the Republican establishment.  Then Trump drew further ire of the Washington establishment when he sought making cuts to excessive defense spending.

Vox News reported on how politics and trading favors amongst the Iron Triangle kept the $3.8 billion F-35 joint strike fighter afloat for decades:

With the loss in economic gravy-train, a monstrous beehive had been knocked over.  So it should be of little surprise that over 50 former-Republican national security officials would endorse Biden for President.

Further proof of institutional corruption within the ‘DC Swamp’?  Perhaps.

But never forget the adage:

Money is the mother’s milk of politics.

Keep in mind that while trimming excess, Trump still strengthened our military. Further, he set the bar miles higher for veteran’s care. Thus, it was only the political bureaucracy Trump slashed.

If this is what 48 months gave us, imagine where we’ll be when Trump leaves the White House in 2024.