I thought I followed the election pretty closely. For the past four years, it’s been a subject in my path. I watched the many twists and turns. Yet, I remained confident throughout that Donald Trump would prevail.

Truthfully, I haven’t given up yet. Because I’ve been in the trenches with the Trump supporters. Like I’ve previously written, I joined in the pop-up parades around Texas, and each time left amazed by the energy Trump supporters share.

Here’s the amazing part. There were no violent protests. No burning buildings or property damage. No ugly words shouted. Yet the left claim to be the party of love and tolerance.

Still, after the many unofficial rallies I’ve witnessed, I was shocked to see the votes come in so close. I’m sorry, but I can’t wrap my head around it. Only one thing makes sense to me. I believe with all my heart that we’re dealing with election interference at the highest levels. 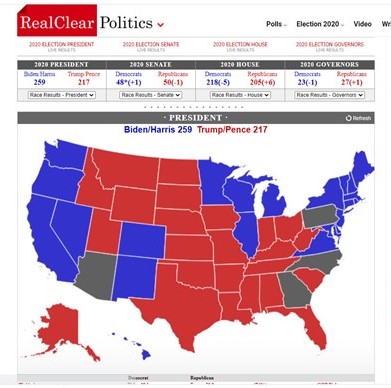 Today, I was surfing through headlines when I happened across a story. Arizona isn’t Biden’s after all. At least not yet. Real Clear Politics put Arizona back in the gray until the recount is completed.

I’ve looked at this map a thousand times in the past week. I’ve done the math over and over. And I’ve calculated every possibility.

While the mainstream media keeps talking about Trump’s alleged loss, I started digging a little deeper. And then I happened upon this name. Jo Jorgensen. After doing a little math, I came to one conclusion. Jorgensen pulled a Ross Perot.

For those of you that don’t remember Ross Perot, he was a filthy rich billionaire who ran for president in 1992. I was a sophomore in high school, and ready to see President George H.W. Bush take home the win.

However, there was a wrench in the plan. Perot wanted to run for President. He vowed to clean up DC and balance the budget. Honestly, many of Perot’s ideas appealed to conservatives. So much so that Perot secured almost twenty million votes. Clearly, that is far more than any other third party candidate in the history of the United States. But it wasn’t enough to win even one electoral vote. But my step-father warned me that Perot would split the Republican vote. Because he had enough innovative ideas to force conservatives to reconsider their choice.

For the past few years, I’ve prayed that we didn’t butt heads with a third party candidate. And honestly, I didn’t find one name in the mix that seemed like a threat. But today, I spotted it.

Jo Jorgensen ran on the libertarian ticket and she managed to split the vote.

With a little more digging, I discovered the following stats:

In Arizona, Biden is projected to win by a margin of 0.44 percent, while Jorgensen so far has cinched 1.5 percent of the vote. The margin between Trump and Biden was 14,746 votes– a fraction of Jorgensen’s 50,293 votes.

In Georgia, Biden holds such a razor-thin lead with the state recounting its votes. Biden currently leads by about 0.25 percent, or just over 12,000 votes. Jorgensen has nearly 62,000 votes in the state, or 1.24 percent.

We can’t say for sure Trump would get all those Libertarian votes, but it is probable based on ideology. But don’t count the bad orange man out just yet.

Georgia just announced they will conduct a recount, complete with hand checked results. And with Arizona still in play, the math tells me that Trump still stands a chance. After everything he’s accomplished for our country, while sacrificing millions of dollars in lost profits due to his absence from his own businesses, it’s devastating to think Trump might not be in the Oval Office in a few months. I have to believe the votes will magically reappear and the stolen election will be returned to its rightful winner. That’s the thought that gives me hope. Because without Trump, we’re left with a swamp, and it’s still full of rats.