Clearly Leftists continue pretending that Joe Biden is President-elect. As I’ve mentioned many times, the fate of Leftism lies with Captain Demento becoming a figurehead for a Soros-run  government.

As an example of the continuation of the ruse, Twitter will assign Biden the POTUS account on Jan 20. Seriously? Because once Twitter turns over @POTUS, it’s official! NOT!

Further, look at anything on Google-owned YouTube, and they proudly display everywhere that AP called the election. Guess who won.

Watch any of the fake news outlets and you likely hear nothing of voter fraud.

I’m not sure they report anything to do with all the votes being overturned, or the recent finding that LOTS OF DEAD PEOPLE VOTED!

A funny thing happened on the way to President Trump’s second term.

As reported by SCOTUS Blog:

A little less than a month after the confirmation of Justice Amy Coney Barrett, the Supreme Court on Friday issued a new set of circuit justice assignments, which take effect immediately. Barrett was assigned to the 7th Circuit, where she served as a judge for three years before becoming a justice. Two other justices, Sonia Sotomayor and Neil Gorsuch, were also assigned for the first time to the circuits where they had previously served as judges – Sotomayor to the 2nd Circuit and Gorsuch to the 10th Circuit.

A circuit justice is primarily responsible for emergency requests (for example, an application to block an execution or to allow it to go forward) from the geographic area covered by his or her circuit, as well as more mundane matters, such as requests to extend filing deadlines. However, justices can and often do refer significant emergency requests to the full court – a role that has taken on increased importance in recent years with the sharp uptick in activity on the court’s “shadow docket.” A map of geographical regions covered by each circuit is available here.

Allow me to simplify what you just read with this graphic: 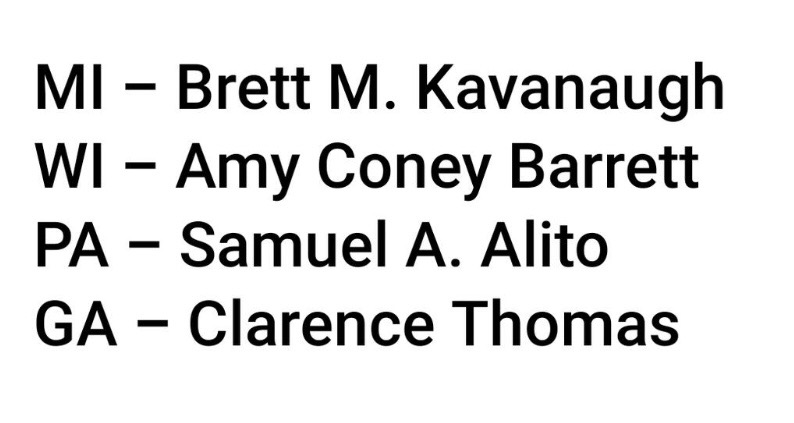 Think the courts don’t matter? And how about that Amy Coney Barrett sneaking in under the radar?

And what of the hundreds of other lower level court appointees by Trump. Think they don’t matter? America will soon see the real impact of the Trump presidency as this sham election plays out.