All the world knows that Democrats cheated in the election. Massively cheated. And it looks like Trump laid a trap for Joe Biden.

Trump’s overwhelmingly huge voter turnout created problems for Dominion Voting Systems, so much so they had to shift the algorithm. As we’ve learned now, the change occurred in multiple supposed battleground states–Trump won all these states easily, so battleground “smattleground”–at precisely the same time. Coordinate much?

Dominion left so many bread crumbs that Stevie Wonder could find them.

Take the “fractional” votes in the election reports, for example. WTF? One person one vote, right? Not with Dominion’s algorithm which registered fractions of votes. Looks like the programmers of deception forgot that little detail when planning the biggest coup in American history, second only to the first coup planned by Obama and his DOJ minions. Don’t worry. We will be discussing that coup and yes, Hunter Biden soon.

Regarding the election fraud of 2020, clues have emerged on how the Trump administration may have planted a few poison pills. For example, watermarked ballots.

And what of Scorecard and Hammer? In the video below, General McInerny explains the terms:

We know that the DOJ traveled to Canada to do something with Dominion. Further, we know that a server farm in Germany was raided. Both these incidents are directly related to an investigation into voter fraud and more importantly “foreign influence” in an election.

The president issued an Executive Order on Sept 12, 2018 that covers all that is happening today. I wrote about here. That EO remains relevant for the 2020 election, and put America under a national security alert.

President Trump warned of the only way this election could be stolen, ballot-harvesting through mail-in ballots. Clearly he understood the magnitude of the problem. And a Wharton-educated self-made billionaire doesn’t recognize a problem then do nothing.

Captain Demento spilled the beans on the Democrats strategy to get his braindead ass elected. Biden actually discussed the Democrats’ strategy to cheat on camera. And while “fact-checkers” say that Biden was taken out of context, let’s be clear: Biden is stupid enough to actually spoil the Democrats’ plan with his Freudian slip.

Undoubtedly, President Trump will fight this election fraud injustice to the bitter end. So the election is not over. Still, the Biden team pretends that Joey Fingers is president-elect.

Biden has illegally reached out to foreign heads of state, as part of the pretense. And he’s holding press conferences (nobody watches) offering policy positions. All this and more in an attempt to “act as if” he’s America’s new leader. But the real hubris came in Biden’s request for transition funds.

Initially, this was rightfully rejected. Because the election is being contested. But there was a sudden change by the GSA, which should have triggered something in even Biden’s non compos mentis noggin. 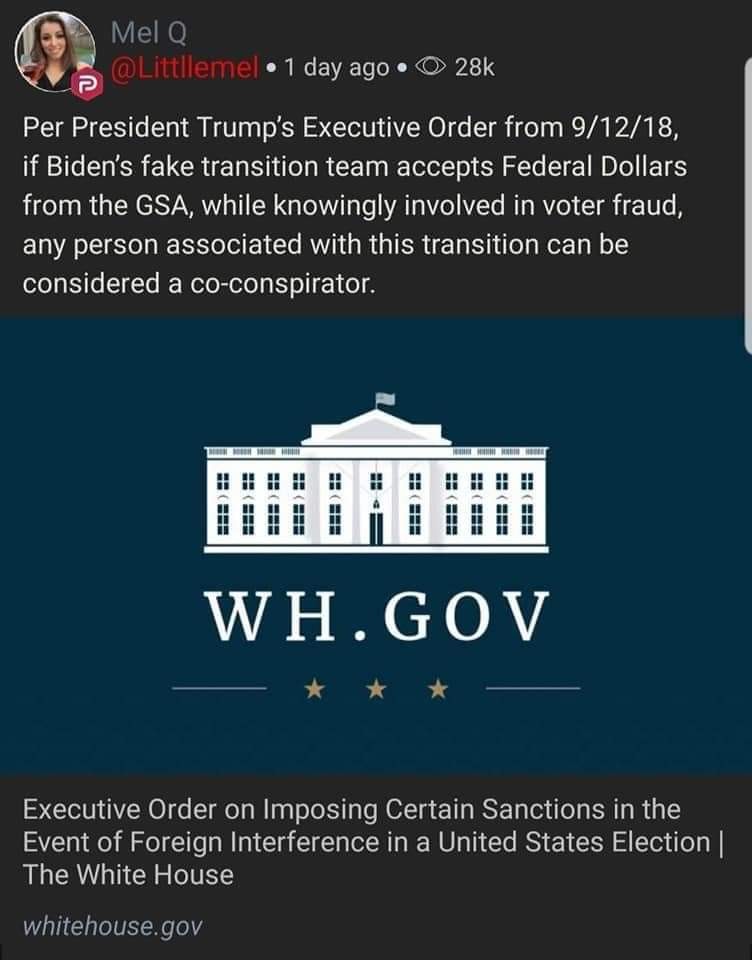 Here is the graphic that raised the question in my mind.

Honestly, the Trump team has Biden and many other Democrats on multiple acts of fraud. Thus if true, this is just icing on a well-prepared “Skank Slap” cake.

For those looking for more than a tweet for bread crumbs, recall Sidney Powell warning to Biden to concede or face Club Fed. If you look for the video, good luck. Social media giants seem to have colluded to take it down. And one source of the video on Twitter had his account suspended.

For those wondering my position, I know that President Trump will prevail. And soon what we all been waiting for will occur as MANY Leftists, including RINOS will do the perp walk. Obama administration minions, and even governors of states.

After this, the president can focus on the Biden family, the Clinton family, and their satellites.

America waited for a white knight, pardon the racial implications. And Trump stepped into the role at great peril. But now Trump knows why God put him in this role at this time. Unlike weak-kneed sissy politicians in the past, Trump embraces his role. He will prevail.