As I’ve said recently, Democrats believe they stand a chance of turning Texas blue. It’s a snowball’s chance in hell, but I guess they’re willing to play the odds.

Or they WERE willing to play the odds. But today, Texans showed up and sent a strong message to #TeamBiden. Texas is red. Born and bred. Simple as that.

Wonder how I’m so sure? I’m a Texas girl through and through. In fact, my grandmother was an official Daughter of Texas, meaning our family traces back to settling the Lone Star State. When you hear people say it’s “Lone Star state of mind,” trust me, that’s a real deal.

If you were born and raised in Texas, you get it. If you visited Texas, you’ve seen it. And if you’ve ever heard the word ‘Texas,’ you understand that my state is just a different kind of place.

As the only state to reserve the right to secede from the United States, “no more bullsh*t” was our slogan long before Trump came to town. But Democrats gained a foothold on us for a while, mainly by suppressing voters. However, the past 30+ years belong to conservatives. And I assure you, it will stay that way.

After months of laying low, Biden now tries to jump on the campaign trail and make up for his time in the underground. Thus, several Texas events were planned. But things didn’t quite pan out for the libtards. Now, Biden’s canceled his appearances after one “Trump Train” surrounded a Biden bus.

As the Tribune Reports:

The highway skirmish came as Democrats close ground in a state that is polling competitively in the race for president. Recent polls indicate the presidential race in Texas between President Donald Trump and Joe Biden is tight, with some national prognosticators calling it a “toss-up.” 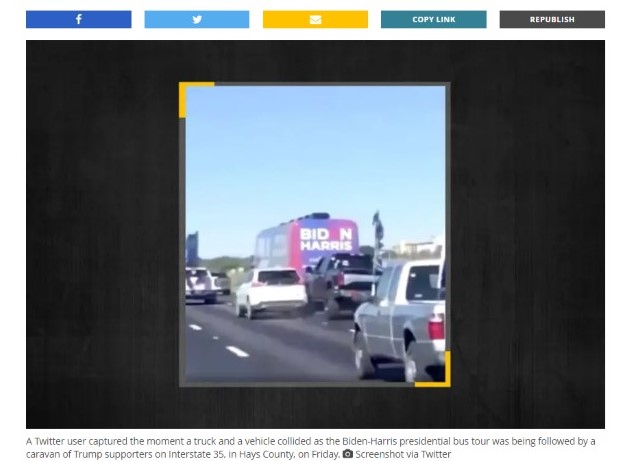 What I find most interesting about this is the fact that the “FBI is investigating.” What in God’s name is there to investigate? A Biden bus rolled into town, a Trump parade pulled up and waved and honked and gave them a good old-fashioned Texas welcome. At what point were the Trumpers causing harm?

However, a few months ago, my mom and I stumbled upon a parade circling Austin. The Trumpers were spirited, but kind. I didn’t witness anyone misbehaving or acting like fools. Except for the one liberal who tried to wreck into several cars.

In fact, I made a video of that liberal. And I posted it to several conservative pages. It had the potential to reach a million people if Facebook wasn’t playing “Can the Conservative.” But the powers that be, aka the “logarithm,” didn’t let the video gain much traction.

So just in case you missed it…

Did the FBI show up? Of course not. Why investigate someone taunting conservatives? But gosh-darned if you drive on the freeway anywhere near Joe Biden, and you happen to let him know Texas isn’t turning blue, it’s time for the FBI to get involved.

It’s the leftist hypocrisy that haunts us day after day.

If the left does it, praise Jesus, hallelujah, can we get an AMEN?!

If the right does something only half as shocking, something completely benign, well, time to call the FBI, the DOJ, the CIA, because somebody needs to start an investigation! And we’ll waste millions to find out conservatives did nothing wrong.

In 48 hours, the election will be over. Of course, the drama won’t be. I believe Biden might even use his Texas exit as some kind of argument for meddling in the election. Trump will carry the Lone Star State, then Biden will argue that we ran him out of town. Thus, we didn’t allow his liberal narrative to catch fire. I predict Joe will try to sue Trump for winning.

Good luck Joe, that’s all I can say about that. Because today, I witnessed the red tidal wave in all its glory.

I live in a small Texas town, with a population of 5,700 people, give or take what the latest census figures show. Our county boasts a population of nearly 26,000 residents. And today, hundreds of them showed up to circle the county in support of President Trump.

I’ve never seen anything quite like it. A good 18 miles of cars stretched from one town to the next! Why? Because our president is a true man of the people. And they want Trump to know who’s rooting for him. Tomorrow, I will share some of the videos and pictures I managed to grab. But for tonight, just know Texas will bring 38 electoral votes to the table.

Here’s another little factoid about me. I was captain of my high school debate team. And I took home the trophy for outstanding female debater, twice. I grew up with a love of country ingrained into my soul. And I’ve always said that the day the masses get out and vote is the day we will finally understand the true power of democracy. Looks like that day has finally come. Not to say I told you so, but I did always know this day would come. And I prayed I’d be alive to see it. Such wonders never cease, not in God’s country.

Now do me one favor. Like, share, or comment this article. Because the social media giants want me to sit down and shut-up. But like my boss, Kevin Jackson, I’m not shutting up anytime soon. Sign up for our newsletter or interact with us on social media. Help us defeat the algorithm!