Of all the people we should be asking about in the wake of “the kraken”, CIA Director Gina Haspel should be at the top of the list.

Haspel’s agency is accused of spying on other governments, and perhaps even helping Democrats cheat in this election. Further, the software used for these election-altering operations is called “Kraken”. Attorney Sidney Powell alluded to “release the kraken”, which I find interesting upon learning of the CIA software.

All this said, I haven’t see a single interview of Haspel. And I’m not just talking about fake news media.

One would think that Haspel would be appearing before somebody in Congress to explain things. Yet, bupkis.

Well, here is an interesting theory.

And before all the fake news outlets declare me as such, I stress that The Black Sphere and everything on The Kevin Jackson Network are all opinion. Nevertheless, this story makes total sense.

CIA Director Gina Haspel was arrested after she was injured in the Frankfurt Germany CIA building raid to secure the servers.

The building had no guards and was unprotected. Haspel pulled in some private special military trained security forces to protect the building from such a suspected raid. When the raid happened Haspel was there.

5 of our special forces troops along with a CIA official were killed in the raid. Haspel was injured.

I try to get three confirmations of the soldiers being killed. I got two, but could not get a third. The CIA made up a cover story about the 5 soldiers and one cia operative killed and said they were killed in a helicopter crash.

Here is the story the author references:

The U.S. Army has identified the five soldiers killed in Egypt on Thursday when their Black Hawk helicopter crashed from an apparent mechanical malfunction. The soldiers were part of the international force of peacekeepers in the Sinai Peninsula monitoring the 1978 peace treaty between Egypt and Israel.

As we all know, cover stories do exist. I have no way to verify this one; but it is plausible.

The author continues and gets more salacious:

Haspel was air evacuated out. She was flown to GITMO where she was treated and received a tribunal for treason…agreed to help Trump for a lighter sentence of life which can be revoked if she chooses to not cooperate. She has now turned over information on the servers, what they were for and what they did and who was involved.

There have been many flown into GITMO because that is where they are interrogating these deep state actors. GITMO is full so they can’t be imprisoned there. Some may be executed at GITMO. Hasple will not be one of them because she has agreed to help Trump in testifying as to what the CIA did and when.

It is unknown how badly she was injured in the raid. She made depositions at Gitmo and a video confession.

I have written many times that Haspel should have been fired when Trump became president. Yet he kept those Obama-era swamp rats. “Friends close, enemies closer”?

Look at what’s being reported on this Instagram page.

Of course, conservative accounts disappear from social media daily. So here’s a screenshot in case you missed it. 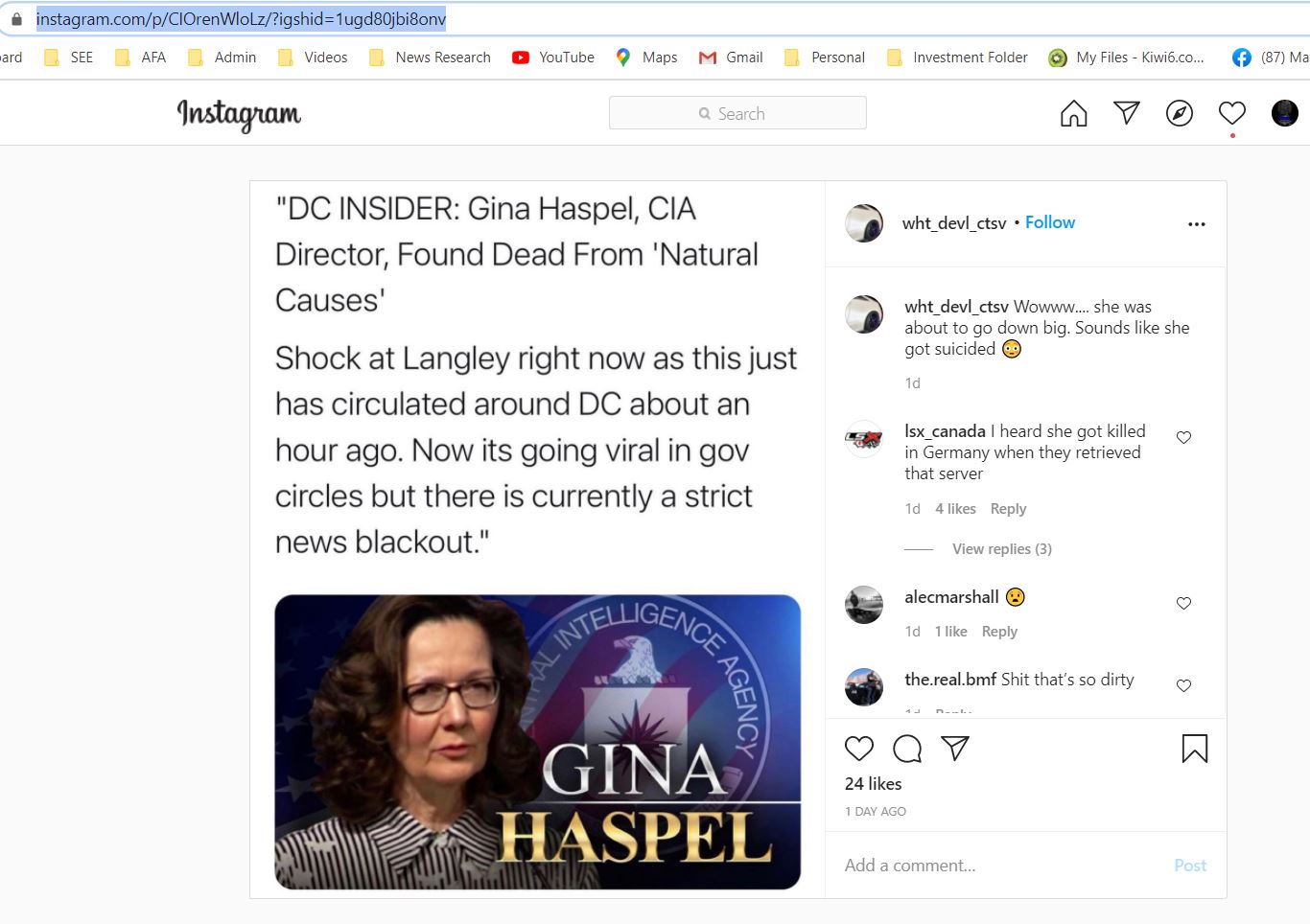 This would be huge news, if true. However, I repeat my disclaimer before Snopes and other Leftists  claim that I report news. I am an opinion page. And in my O-PINION, I think this story may very well be true.

Lots of dots get connected. And when I consider what Lin Wood said recently of people in the DOJ who are real patriots, my antenna goes way up.

Next, consider a move President Trump made in the Department of Defense from an excellent article in American Thinker:

Trump’s choice for Esper’s replacement — Christopher C. Miller — is also interesting: Miller is a Special Forces guy.  Moreover, his appointment coincided with a Pentagon shake-up that has seen Special Forces cease to be subsets of the other branches of the military.  As of November 18, they’re now on par with them:

“I am here today to announce that I have directed the special operations civilian leadership to report directly to me instead of through the current bureaucratic channels,” Miller said during an unannounced visit to Fort Bragg, North Carolina. “This historic step finalizes what Congress has authorized and directed and will put Special Operations Command on par with the military services for the first time.”

But this was merely Phase I of Trump’s “restructure”. Next is Phase II, as suggested below:

Having said that, the move may make a lot of sense in light of that alleged “military” raid in Germany, although it’s unclear if it was on Scytl (as Louie Gohmert said) or on the CIA’s headquarters (as other internet rumors allege).

For purposes of thinking about Trump’s decision-making, I’m going to assume that something happened in Germany that relates to the election.

And that’s where we get to Nick Chase’s excellent post, “Listen closely to Sidney Powell…”  Nick speculates about Powell’s hints that there’s a giant struggle taking place in Germany between “good guys” and “bad guys.”  He wonders if Trump hasn’t been tracking election information on those mysterious German servers.

Complicated puzzle, right? But I’m beginning to get the picture. Accordingly, I don’t think we will hear much from Gina Haspel anymore.