The pain the Left feels when they consider Trump’s popularity is undeniable.

That’s because Obama set the high mark for elections. Or so Democrats thought. And perhaps so did many of us. After all, Obama had all the qualities.

Democrats loved their Black man who could “pass” in the white world. And the idea that he pronounced all the letters when he spoke, well who doesn’t like the well-spoken Negro at the Leftist cocktail parties?!

So when Obama hit the scene in 2004, it was his coming out party.

Immediately the Left began embellishing his resume. He became a professor without real credentials. And as his resume continued to build, every word Obama spoke, past and present, was idealized as “words from Heaven”.

By the time the man declared that he was unprepared to be president (but would run anyway) it was an anointing.

Massive crowds greeted him everywhere, and rightfully so. He said a lot of right things, though most of what he said was like his upbringing and past work: confused. Still, Americans, yes RACIST AMERICA, overwhelmingly supported the clown.

So now, ask any Democrat how they can rationalize admitting that a 78-year old braindead feckless moron like Biden is better than Baby Black Jesus? By 12 MILLION votes! LOL.

That’s like waking up next to somebody you never would have sex with…SOBER!

Look at the graphic below. It depicts the reality of the elections. 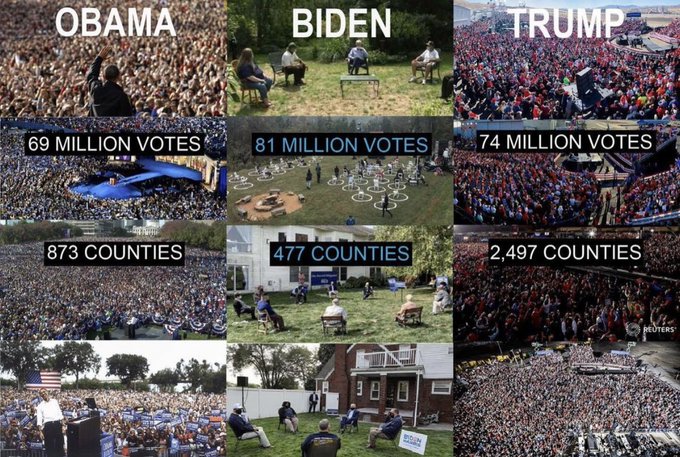 Here’s Obama in 2008 appearing before unbelievable crowds. And you can bet if the Wuflu existed back then, the crowds would have still been as large.

By 2012, the gold-plating wore off of Obama. Then America saw the pewter underneath. Obama’s drag caused Hillary Clinton’s loss, despite the cheat already in play. They never counted on the underlying popularity of Trump supporters. In fact, they dismissed Trump rallies as side-shows. The fix was in for Hillary Clinton. Ultimately, the result was a massive fail.

Fast forward to Biden. Sitting with less than a dozen people at every event. We are told, “for the safety of people”. A Biden event was safe, because nobody showed up. Still, the media reported that Biden led Trump everywhere. Truthfully, Biden led nowhere.

In a fair election, Biden would have trouble winning California. And the idea of a “battleground” state would be laughable. Trump easily trounced Biden in every battleground state.

And Trump has the crowds to prove it.

In 2008 with Obama, we conservatives know that McCain got his spineless ass kicked. We had no hope. We would never argue this.

But if we had Obama post-Obama like Democrats, we would sadly admit that he has lost his shine. As Trump declared, without Obama, he wouldn’t have run.

But Trump did run and win. 2016 shattered the belief system of Democrats. Further it set the pace of things to come: the most popular president in American history.

So, as we knew in 2008, Democrats knew the outcome of 2020. And that’s why they implemented the biggest cheat in the history of politics.

Let’s say Biden gets in office. I’m going to bet the good Lord rights the wrong. Biden and the Democrats will feel like Ramses in Exodus when God finishes with them.

You can’t mess with God’s country and expect nothing to happen. Millions of prayer warriors asking for one thing: Dear Lord, give the perpetrators of these wicked events their just rewards.