Most conservatives knew exactly what would happen once Joe Biden took office.

Stories of election fraud would start to surface one by one.

Here’s a little tale that calls Georgia’s election integrity into question. Apparently, Brad Raffensperger, Georgia’s Secretary of State, has another list of dishonest moves to add to his repertoire. And this time, his lies are reprehensible.

As the Gateway Pundits reminds us:

To this day there are hundreds of thousands of ballots that were lacking the legal documentation to confirm the results in Georgia in the 2020 election.  Secretary of State Raffensperger certified the results anyway.

Hundreds of thousands of ballots lack the proper documentation required by law to confirm their validity.  These votes should never have been certified by anyone:

But there’s more.  Raffensperger used a firm to audit the Dominion voting machines before and after the 2020 election.  But Raffensperger withheld information on the audit firm and actually lied about its certifications.

“There should be an investigation, a thorough criminal investigation, frankly, of everyone involved in acquiring the Dominion [Voting] System for the state of Georgia,” attorney Sidney Powell said.

It’s unbelievable that Congress hasn’t stepped in to investigate. From what I remember of the Trump Administration, it seems Congress was always ready to assemble a team and seek the truth. Has our government forgotten their ability to get to the bottom of things?

Proof in the Pudding

Honestly it wouldn’t matter if we had undeniable proof of voter fraud in every single state. Congress would continue to push Joe Biden as the legitimate President of the United States.

Jeff Carlson at the Markets Work shared this in early December:

The firm hired by Georgia’s secretary of state to conduct an “audit” of Dominion Voting Systems technology used during the 2020 elections is the same one that previously certified the Dominion systems and also approved a last-minute system-wide software change just weeks before the election.

Secretary of State Brad Raffensperger failed to disclose that the company, Pro V&V, had a preexisting relationship with Dominion that dated back years, in his Nov. 17 statement announcing the results of the audit.

Raffensperger also failed to disclose that Dominion had used technical conclusions from Pro V&V in a pre-election Georgia lawsuit that questioned the reliability of Dominion’s systems during a last-minute software fix before the Nov. 3 election. The testing from Pro V&V had been characterized as “superficial” and “cursory testing” by an expert cited in court documents.

In the widely quoted statement, Raffensperger said that the audit of Dominion machines was complete, there was “no sign of foul play,” and that “Pro V&V found no evidence” of tampering with the machines.

We are glad but not surprised that the audit of the state’s voting machines was an unqualified success,” said Secretary Raffensperger. “Election security has been a top priority since day one of my administration. We have partnered with the Department of Homeland Security, the Georgia Cyber Center, Georgia Tech security experts, and wide range of other election security experts around the state and country so Georgia voters can be confident that their vote is safe and secure.”

Raffensperger also included an impressive description of Pro V&V in his statement, but again failed to disclose the firm’s relationship with Dominion, nor did he address the fact that Pro V&V appears to be a very small and private company that operates out of a single office suite.

Raffensperger issued a memo of the results of the Pro V&V audit at that time: 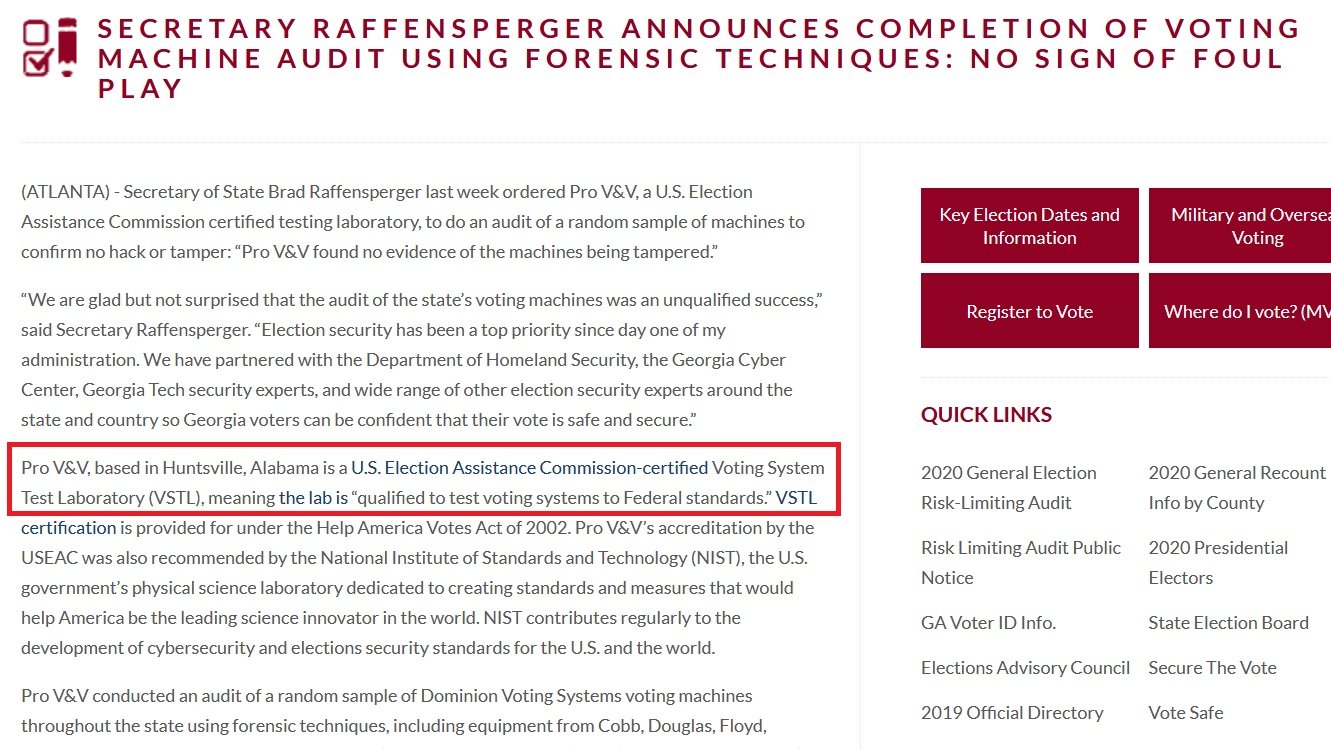 Here’s the first problem with Raff’s memo. Pro V&V didn’t have the necessary certifications when they audited the Dominion voting machines. They lost their certification in 2017. I don’t know if it was taken away or simply not renewed, but they’re just now “certified” again.  It’s likely that they rushed to fix that little problem once the news broke!

We reported yesterday morning that Pro V&V was not certified and by yesterday afternoon the EAC posted memos to its site re-certifying Pro V&V. (It’s still unknown what actions took place to re-certify Pro V&V so quickly after our reporting.)

Regardless, when Raffensperger claimed Pro V&V was a certified auditor, he was wrong, he lied.

At the end of the day, Georgians should be furious. Especially considering these abnormalities weren’t investigated. Georgia was lied to. America was lied to. And now, no one cares to make it right. Congress doesn’t even want answers. But conservatives do.