If the price of Dr. Seuss books is any indicator, cancel culture is dead.

If not, then cancel me. Because Dr. Seuss book prices have soared. Look at the prices on Ebay:

Makes me want to recover all the ones I donated after my sons learned to read with them. I had the entire collection.

Who knew Dr. Seuss books would be worth more than bitcoin?!

Now, Dr. Seuss is racist, and has become the latest victim of woke-mob cancel culture.

Six Seuss books – including “And to Think That I Saw It on Mulberry Street” and “If I Ran the Zoo” will no longer be published due to ‘racist and insensitive imagery,’ according to the organization which preserves and protects the author’s legacy.

“These books portray people in ways that are hurtful and wrong,” Dr. Seuss Enterprises told The Associated Pres in a Tuesday statement coinciding with the late author’s birthday (real name Theodor Seuss Geisel). “Ceasing sales of these books is only part of our commitment and our broader plan to ensure Dr. Seuss Enterprises’ catalog represents and supports all communities and families,” the statement continued.

The other books affected are “McElligot’s Pool,” “On Beyond Zebra!,” “Scrambled Eggs Super!,” and “The Cat’s Quizzer.”

So when Michelle Obama praises #DrSeuss, we smile & applaud. When Melania Trump does the same, it's supposed to be racist? I'm so confused 🤔 pic.twitter.com/iwrXhkPnUV

In case you miss the double-standard, take a look: 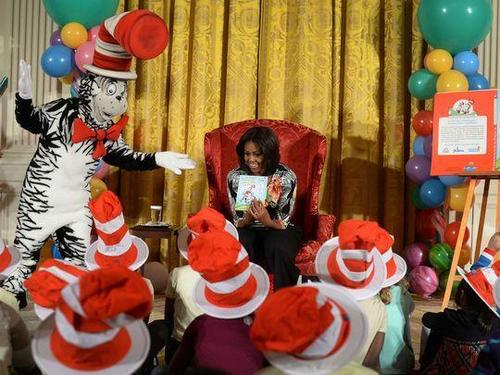 Is that America’s black royalty reading the ‘racist garble’ to a bunch of wide-eyed Seuss followers? Once again, a Trump can’t make a contribution to society. Because leftists meltdown whenever they see the good Trump’s family works to do.

According to White House spokeswoman Stephanie Grisham, “giving the books was part of Trump’s effort to use her platform “to help as many children as she can.” And in return, a snot-nosed librarian refused the gift.

But liberals had no idea that not only do conservatives still back Donald Trump, but they also still adore his lovely wife.

America has Melania’s back.

Gifting “Oh! the Places You’ll Go” is a classy move from the former first lady. Clearly, she appreciates the message of optimism. And she’s not the only one. As my colleague Tiffany Layne put it, “Dr. Seuss has long been considered one of the world’s most influential children’s writers. And his lessons weren’t so bad for grown-ups either.”

He encouraged values such as diversity, inclusion, loyalty, and bravery. And the fact that his tricky rhymes and wacky characters draw in children’s attention is just icing on the cake. Seuss pushed children to love reading in a way that is still imitated to this day!

His contributions to literacy can’t be ignored just become some sissified lefty got offended.

Dr. Seuss had a creative mind that kept the interest of even young children with his made-up characters who behaved outrageously and made the children laugh. As a former teacher, I know how important Dr. Seuss Week was in the classroom. Children dressed up, wrote their own rhymes and illustrated the hallways with fanciful artwork. They listened to the stories over and over even though many of them had heard them at home.

I know many graduates of high school and college have been given “Oh The Places You’ll Go” because parents and grandparents know that this book is true to its core. There will be good times and there will be bad decisions made, but each one of us must find our way through. And truly not one of us knows the places we will go. But Dr. Seuss made us realize that we are all the same at heart.

So I will disagree with cancel culture and I will continue to encourage my grandchildren to read these books for as long as they hold their interest. I wish that I had the writing skills to draw children in and to keep them engaged. This is where children should be, in a world of imagination that can take them to wonderful places because “From there to here, from here to there, funny things are everywhere” (”One Fish Two Fish”).

In other words, each of us rejects this new status quo. And we suspect conservatives and liberals alike recognize that this has gone too far. Dr. Seuss will remain a cornerstone of childhood wherever we may be. It’s time this cancel culture be canceled.