Just when you think the Brother’s Cuomo can’t get any more obtuse, ol’ Chris opens his yap with another mentally deficient commentary.

Per Chris, the way to rectify Blacks getting killed by cops is to start killing white people’s kids!

Is he absolutely insane?

Here’s what he had to say:

“You know what the answer is…you really do. And you don’t like it, I don’t like it…it scares me,” he said. “Shootings, gun laws, access to weapons. Oh, I know when they’ll change. Your kids start getting killed, white people’s kids start getting killed,” Cuomo said. “Smokin’ that doobie that’s actually legal, probably, in your state now, but they [police] don’t know what it was and then the kid runs and, pop, pop, pop pop! Cop was justified. ‘Why’d you run?’ Oh, he had a baseball game tonight. White kid, big family, oh, that house over there.”

First of all – what did he just say? It doesn’t even make sense. Did he actually suggest killing white kids will end the black man’s death by cop?

Mind numbingly moronic Chris Cuomo. I’m just guessing here- but Cuomo seems like the perfect example of why you don’t give every kid a trophy. Because idiots like this grow up believing they’re just as smart as the next guy. And when it comes to Cuomo, the next guy happens to be the Governor of NY. A serial killer, at best. No wonder death to white kid seems like a feasible strategy to this pond scum.

Funny how Chris Cuomo doesn’t seem to equate the horrific deaths of innocent elderly with his brother’s maleficence. In fact, when the story breaks that his brother is headed for prison, little brother will cry on screen and act completely caught off guard. But maybe someone will have to put the Cuomo parents in a nursing home. And then karma could take it from there.

I just want to be clear.

What I can’t seem to fathom, no matter how hard I try, is why so many people latch on to this narrative. A narrative that the Cuomo bros have helped to perpetuate to cover their failures, time and time again. These two brothers are the worst of humankind. The absolute worst.

For Chris Cuomo to push these fictional tales about police, systemic racism, and why innocent Blacks are being killed is factually wrong. Not only is it wrong, but it’s so dangerous to perpetuate a fictive that causes so much pain and hatred. But Chris Cuomo is a hate-filled vessel. And he sells it to his audience every. single. day. Unfortunately, the viewers of CNN are not willing to educate themselves on their own, so they buy the rubbish that’s being sold.

Statistics don’t lie – only the people selling a narrative lie. Like Chris Cuomo.

Here are the statistics:

According to the Citizens Journal:

According to statistics cited by Candace Owens:

The percentage of people killed by cops annually:

Further – Check out this graph cited by Statista.com 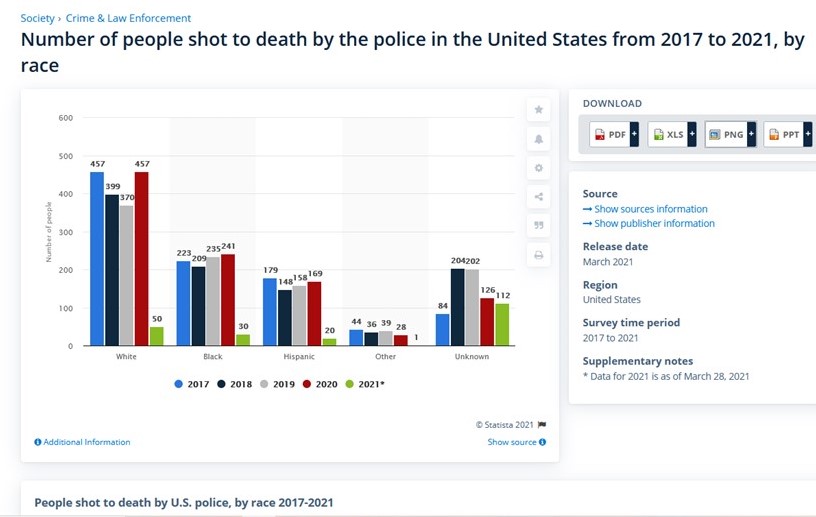 But who needs facts? Certainly not a Cuomo.

Chris Cuomo has nothing to back up his claims. He is wrong, BLM is wrong, Liberals are wrong, and the weak Woke is wrong. Because statistics don’t lie. Liberals are pushing this country to the brink of a civil war, and as mob rule always pans out – the mob will turn on those pushing a narrative because, in the end, there is nothing real in what they are fighting for. It’s a ruse. Police killing Blacks disproportionately is a scam of the most egregious kind.

CNN is devoid of any consciousness about the “propaganda” they push that’s literally ruining people’s lives. Remember, they wouldn’t cover Andrew Cuomo’s crimes and abject failures. Andrew Cuomo is responsible for killing upwards of 15,000 innocent elderly. I can’t say that enough. Where’s this justice?

According to a Fox News article:

Friday during “Cuomo Primetime,” CNN’s Chris Cuomo said that police and gun reform won’t happen until “White people’s kids start getting killed.
“Shootings, gun laws, access to weapons. Oh, I know when they’ll change,” said the anchor. “[When] your kids start getting killed. White people’s kids start getting killed.”
Cuomo put on a hypothetical accent and pretended to be a White parent. “What’s going on with these police? Maybe we shouldn’t even have police,” he said. “That kind of madness. That kind of mania. That will be you. That will be the majority. Because it’s your people,” Cuomo said, apparently directed at the White members of his audience.
“How many more?” Cuomo asked. “Die of the pandemic, dying from police shootings. George Floyd, Daunte Wright. I wonder if you’ll remember their names six months from now because they’ll be replaced by so many others.”

Cuomo doesn’t believe a victim’s past should have any relevance in police shootings.

“Why do that? Because you wanna make the problem them,” he said. “Takes the onus off the idea that you’re wrong about policing needing to change.” “Forget that police are trained to deal with non-compliance with force that is not lethal. Hey, comply or die,” Cuomo said.

So, let me get this straight: Chris Cuomo says that someone’s past isn’t important when they’re in a confrontation with the police. It’s just a loophole to take the responsibility off of the person that is in the wrong – in this case, the police. He suggests that any police officer confronted aggressively, should submit? Our law and order police officers should submit to someone coming at them with force?

The part I love in this ridiculous soliloquy is how he portends the populous that doesn’t go along with this nonsense are only doing it to take the onus off of the police.

As in, like…his brother? Again, the guy who single-handedly killed 15,000 non-aggressive, elderly patients. Remember when they both tried to take the onus off of the Governor, blaming Trump? That was actually after NY Cuomo applauded Trump for getting him everything he needed. Even then, the fool couldn’t manage the pandemic.

Am I getting this right so far Chris?

How about the case of Ma’khia Bryant?

But, if we go by Cuomo’s theory, that White kids need to die to help Black kids stay alive, then why are Blacks killing each other at such an astonishing rate? Why haven’t they figured out it’s time to kill the white kids?

Just another vacant, vapid Liberal lie to ingratiate themselves to the masses that are willing to be spoon-fed falsities. This theory is intellectually brainless.

So, I guess my question is this Chris: While you’re spewing your false, vile, and hate-filled drivel, when do you think you’ll stop spreading these corrosive lies about Cops killing Blacks? When do you think that inciting violence will be enough for you – when it’s your White kid that gets killed?