Former police officer Derek Chauvin had no chance. The “woke” society appointed a hanging judge and a stacked jury for his kangaroo court.

In what is reminiscent of the 2020 Presidential Election, the deal was sealed before the election occurred. In the case of Chauvin, social media Gestapos and other Leftists cooked his goose before he ever set foot in court. Chauvin was never going to win.

And now we learn that jurors lied about knowing anything about the case. National Review reported:

One of the jurors who served on the jury that returned a guilty verdict for Derek Chauvin in the death of George Floyd defended his attendance of a Black Lives Matter protest before the trial.

Brandon Mitchell said he participated in the August 28 event commemorating Martin Luther King Jr.’s “I Have a Dream” speech delivered during the 1963 March on Washington, according to the Associated Press.

A photo circulating on social media depicted Mitchell sporting a Black Lives Matter shirt featuring a picture of King and the phrase, “Get Your Knee Off Our Necks!,” at the protest. Mitchell admitted that he was present at the event.

Speakers at the demonstration included family members of George Floyd, Breonna Taylor, and Eric Garner, who were all involved in fatal altercations with law enforcement officers, according to a schedule of the event.

Clearly Mitchell knew he was a flawed juror. And you can bet he didn’t care. Because is his mind, convicting Chauvin before seeing any real evidence was for “the greater good.”

The greater good is what Democrats claim right before they f*ck over America, as they did in the 2020 Presidential Election.

A form sent to prospective jurors before selection included two questions pertaining to demonstrations. Mitchell said he responded “no” to both.

The first question asked: “Did you, or someone close to you, participate in any of the demonstrations or marches against police brutality that took place in Minneapolis after George Floyd’s death?”

The second question asked: “Other than what you have already described above, have you, or anyone close to you, participated in protests about police use of force or police brutality?”

Mitchell said during jury selection that he had a “very favorable” view of Black Lives Matter. He also mentioned that he knew some police officers at his gym who are “great guys,” and that he felt neutral about Blue Lives Matter, a pro-police organization.

I believe this guy had as favorable a view of police as Patrisse “Con”-Cullors, the leader of BLM.

My bet is this guy wanted to be part of “history.” He would later cash in with black Leftists and woke white Leftists. This lying scumbag would be a hero to the community. 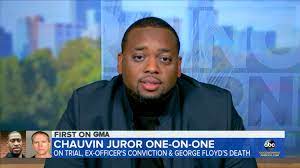 If I were an investigative reporter, I’d check to see if he’s talked to any publishers or movie producers. Here Mitchell appears on Good Morning America.

NBC noted that Mitchell was the “first juror to speak out.” And what did he say?

“We all went into this thing with an open mind?”

If you know Leftist-speak, you know that he means quite the opposite.

Chauvin’s attorney’s rightfully asked for a review of this new information. Let’s hope justice really gets served and jurors like Mitchell get justice for lying.