Every media outlet in America is baffled by Kamala Harris and her latest border comments.

We’ve been so focused on Biden’s dementia, that we’ve possibly missed Kamala Harris’ severe brain injury. This woman is incapable of forming a coherent thought. Much less a plan of attack.

Here is the full interview between Lester Holt and the Vice President.

“We have to deal with what’s happening at the border.”@VP Kamala Harris spoke exclusively with @LesterHoltNBC on her first trip overseas, how the administration is addressing the immigration crisis, and if she plans to visit the southern border herself. pic.twitter.com/sA4We7peeR

Notice, Harris has no real solutions. Border crossings for April of 2021 are up more than 1000% over April of 2020. Yet, Harris is focused on securing online banking and vaccines for Guatemalans. That’s Harris’ big idea.

For the record, I’m sure we can send plenty of vaccines across the border. Americans don’t want them. In fact, in my little corner of the country, our county judge just announced that they’ll pay parents $250 per child to get them vaccinated. Because they just can’t drum up enough interest in getting poisoned- so they’re hoping the need for new school clothes will prompt parents to take the cash. That’s a lot of cash for a big family like mine, but no thanks. We’ll take our chances with the WuFlu.

In other words- please, take all the vaccines you want. But be forewarned, you may get more than you bargained for- like bells palsy. Or death. But, I digress. Now, back to the border crisis. There is definitely a root cause for our problem. And it’s a five letter word. BIDEN. 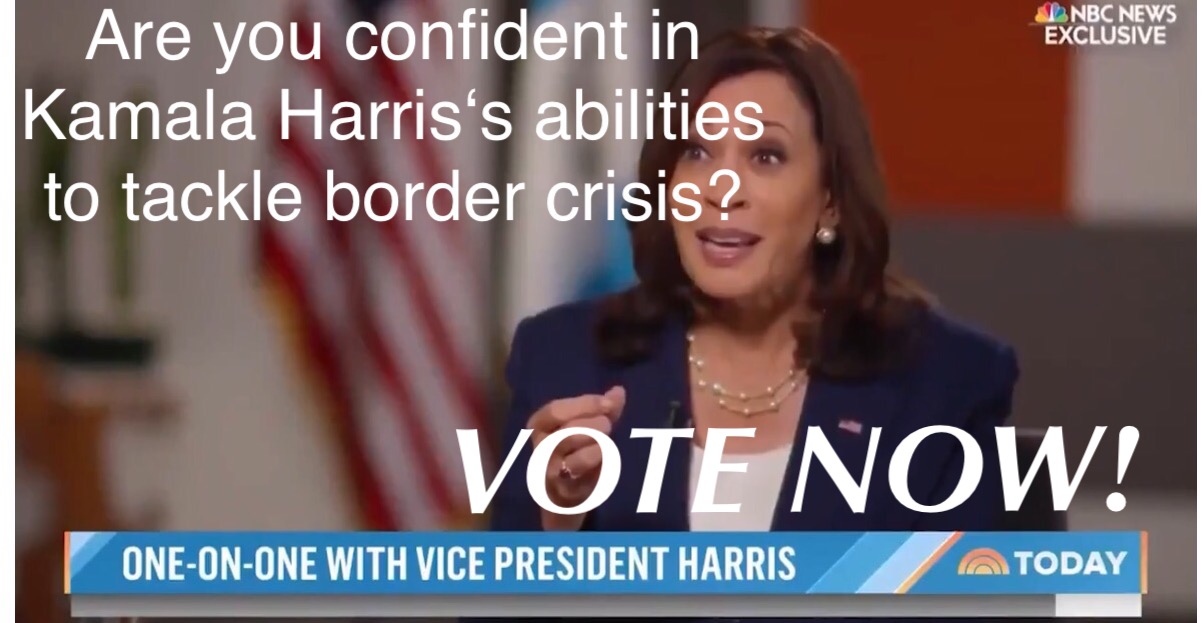 He sent a clear message to migrants. Do not come ILLEGALLY. Obviously, Trump completed the job. All Biden had to do was keep Trump’s policies in place. And continue to construct the border wall. But Biden threw Trump’s work down the garbage chute. And now the Biden/Harris Administration must pay the piper. We’re seeing a thousand migrants a day just walk across the Rio Grande. And Americans, especially Texans, are beyond frustrated.

Good for @LesterHoltNBC holding the @VP‘s feet to the fire. Unfortunately, she’s really shown her lack of experience as she blunders through this issue (one wonders if she – and @POTUS – really take the situation seriously).

Trump he just did it better pic.twitter.com/jcDK7azELB

Will she ever directly any question asked of her. ????? Appears all spin and no answer.

The VP is clearly under pressure. Now, it looks like she is actually about to break. As Laura Ingram weighs in:

“The real action this week was not with POTUS but with V-POTUS,” Ingraham said on Friday.

“Kamala Harris has finally run into the buzz saw that she’s probably been avoiding her entire life. It’s called reality, as in having to answer serious questions about a real, real problem, the border crisis, which Biden foisted on her to address, but instead, it’s just become a mess.

“And by the way, Harris is showing signs of cracking,” Ingraham added.

Afterward, Ingraham highlighted Harris’ campaign for the 2020 Democratic presidential nomination. Then a senator for California, she clashed with former Vice President Joe Biden in debates but dropped out of the race on December 3, 2019.

“The fact is, everyone is starting to see what Democrat primary voters knew about Kamala Harris in 2019,” Ingraham said. “She’s just not a prime-time player. She has no relevant experience, and she’s totally in over her head.”

Ingraham suggested President Joe Biden and the administration may have “a growing case of buyers’ remorse” over picking Harris following reports that the White House wasn’t happy with the way the vice president answered a question about not yet visiting the southern border.

Think about that for a moment. Because the White House is occupied by Joe Biden. And his brain is too far gone to be “disappointed” by Harris. Thus, she must be certifiable if Biden noticed her shortcomings.

“If the woman gets prickly when asked a simple, obvious question, how the heck is she going to do when she sits across the table from her, let’s say, her Chinese or Russian counterparts?” Ingraham asked.