These are actual things being discussed by Leftists. Which one is the craziest:

FYI, apparently a tick disease that escaped a Colorado lab supposedly makes people allergic to meat.  So if your stupid enough to take the next shot, you’ll know why you can’t eat meat!
I get the need to engineer things to be smaller, perform better, and outlast their predecessors. I love my LED Christmas lights. I’ve yet to replace a single bulb. But engineering smaller people? Surely, this is a joke. At least, that was my reaction when this list of leftist lunacies crossed my desk. But apparently, this is touted as the vision for the future.
Forget your crush on that 6’4″ hunk, he’s now 5’7″ with his boots on. And the point of shrinking is to consume less. According to liberals, humans posses both biological and ecologic foot prints. And with the growing global population, it just might be time for some genetic modifications.

For the past decade, we’ve been inundated with messages telling us to eat clean. No dairy. No red meat. And certainly no animal products. We need to drink grass shakes and eat kale. Lots of kale. But what if you can’t resist the double-meat, double-cheese bacon burger from your local burger joint? Our town boasts such a burger with pepper-jack cheese and a jalapeno bun. It certainly defies the mantra of “eat clean.”

But have no fear, a cure is here.

Some of the proposed modifications are simple and noninvasive. For instance, many people wish to give up meat for ecological reasons, but lack the willpower to do so on their own. The paper suggests that such individuals could take a pill that would trigger mild nausea upon the ingestion of meat, which would then lead to a lasting aversion to meat-eating. Other techniques are bound to be more controversial. For instance, the paper suggests that parents could make use of genetic engineering or hormone therapy in order to birth smaller, less resource-intensive children.

In other words, if the tick doesn’t get you, then you can find this aversion in pill form. And, you can buy it with your shiny new MasterCard.

Since when do credit cards care about your gender? Or your sexuality? This isn’t the 1950s, where Mama ran up the bills and Daddy paid them off. Yet, in recent years, MasterCard started using these social issues as a way to attract more customers. Don’t get it twisted, they still don’t care about which side your bread is buttered on. They just want your dollars.

Here’s what I got when I plugged in a little Google search. 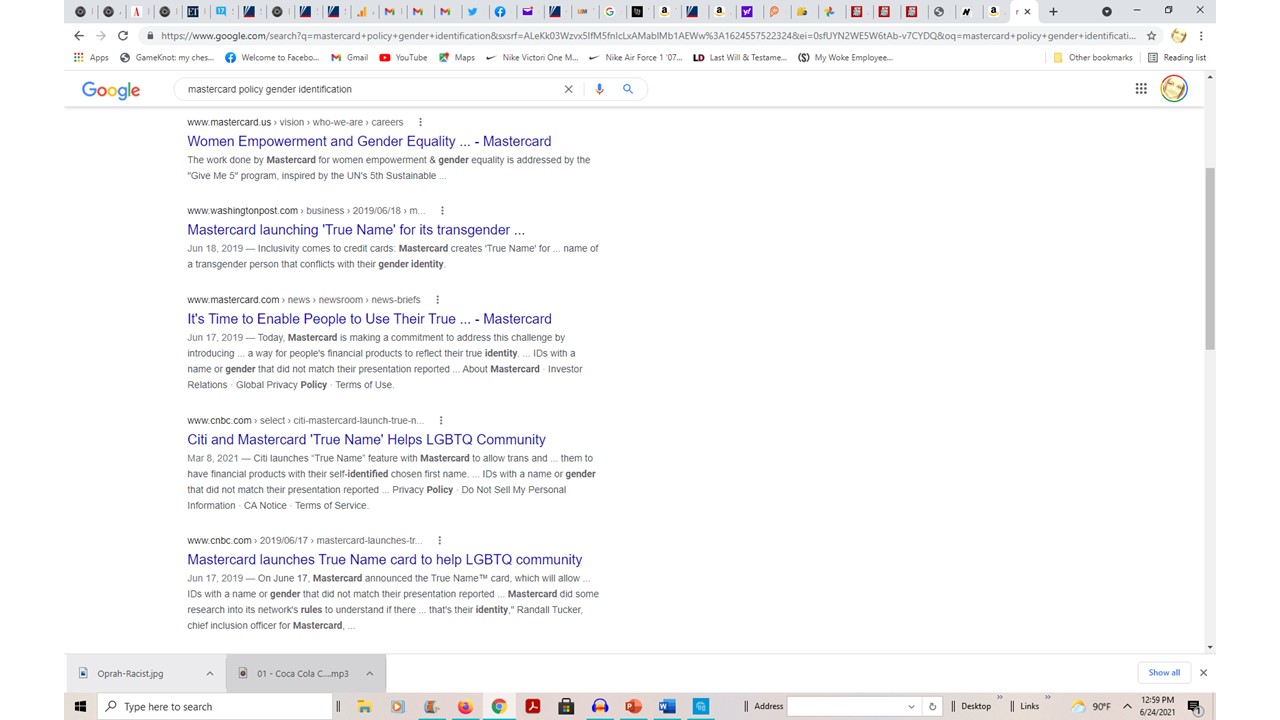 Here’s the good news. MasterCard will take you if you’re gay, transgender, non-binary, or if you identify as a purple alien. Of course, they want to exploit you in the process, while painting themselves as social just warriors. Yet, perhaps they haven’t gone far enough. I think MasterCard should expand this little division scam. Where is the card for guitar players? Housewives? Anonymous Alcoholics? Reborn Christians? Injured athletes? Why not separate the sugar daddies from the golf pros? I think there is a huge opportunity here to take advantage of personal identities.

That’s what leftists do. They work to create separation and division. And then they publish ridiculous ideas like using ticks to create meat allergies and implementing the Green New Deal. If you’ve somehow forgotten that craziness, let me just remind you that it sought to replace all buildings and cars while eliminating cow farts from the environment. Yet, leftists expect us to take this nonsense seriously. So I have to ask, what’s the looniest leftist or leftist idea you’ve come across?