For those of you who may be unfamiliar with dementia, understand that all you need to do is watch Joey Demento Biden in action.

Biden is a menace to Democrats as polls prove, as does about anything he touches.

The economy is in shambles, Afghanistan has been overrun by the Taliban, Putin and Xi publicly sodomize Biden in their countries, and that’s just for starters.

The crime rate is rivaled only by inflation as both soar in the Era of Dementia, as I’m sure American history will someday chronicle the country’s demise.

America suffers the embarrassment of a Biden “presidency” routinely. All because a few elitists decided to dump Trump. Now we get to watch Biden make a fool out of himself and at times the country.

During a recent speech about the planned pullout of American troops from Afghanistan later this year, Joe Biden awkwardly attempted to explain the reasons for America’s going into Afghanistan.

This was followed by a more than five-second delay.

“…bring Osama bin Laden to the Gates of Hell, as I said at the time. The second reason was to eliminate al-Qaeda’s capacity to deal with more attacks in the United States from that territory. We accomplished both of those objectives.”

I could feel Biden’s mustard-seed-sized brain attempting to work out what he wanted to say.

Clearly however the words took a long time to make it to his mouth. As Blasey-Ford might say of Biden’s public humiliation, “his hypothalamus didn’t register with his hippocampus”.

Biden couldn’t figure out his FIRST POINT! And we jettisoned Governor Rick Perry of Texas because he forgot his third point. And it didn’t take six seconds for Perry to finally find his third point.

Biden’s brain froze six seconds, a lifetime during a speech. Is it any wonder why this guy trips going UP the stairs?

And let’s not forget the whole “my butt’s wiped” fiasco. That video is still making the rounds. 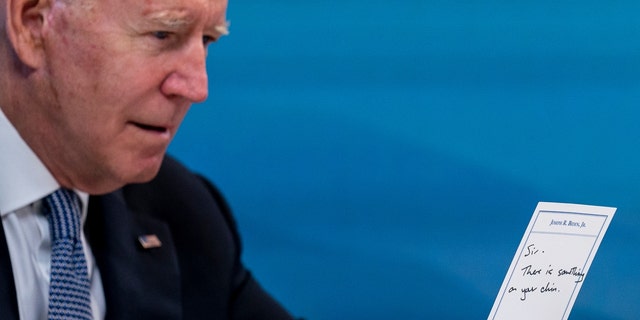 “Sir, there is something on your chin,” the note read. Hard to believe his handlers missed that! Perhaps our fumbling, bumbling President has now reverted to drooling on himself. Are diapers next?