And Biden represent incompetence at the highest level. Sadly, Joe Demento proved to be a more worthless “president”, than he was a vice-president.

Americans fear the unknown, now that we have a demented clown in the White House. But that won’t stop the Left from “selling” Biden. And if Americans don’t buy Biden, Leftists will beat Biden’s competence into you.

Check out how the White House spins Biden’s incompetence: 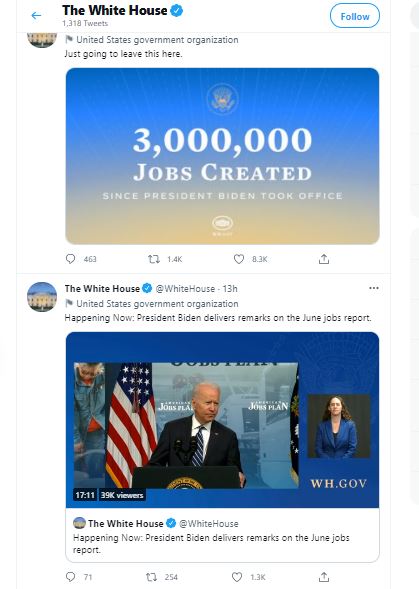 I love how they only wrote: “Just going to leave this here”.

Indeed. Like Biden ever created a job in his miserable life, outside of the job he created for Hunter running the family’s racketeering organization.

The jobs reports have been dismal under Biden. Monthly we hear that Biden failed to reach economists projections. Worse, almost always they revise Biden’s jobs reports down.

Still, this clown and the rest of his circus want us to believe that Biden is responsible for new jobs. Remember how Leftists crushed Trump’s brilliant economy so that Biden could ride in as the Great White Hope to save the day.

The problem is Leftist made welfare so seductive that people DECIDED NOT TO GO BACK TO WORK! 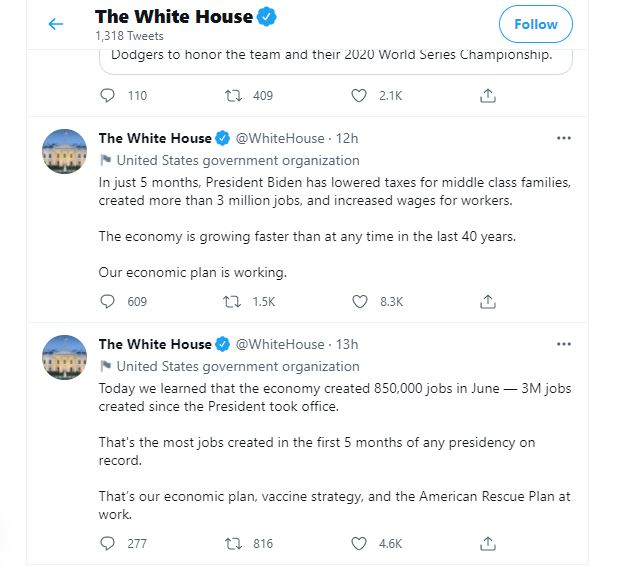 But the White House didn’t end there with the bragging. They tweeted:

Inflation under Biden has Americans panicked. But our panic is nothing compared to that of Democrats. They sell inflation as “fleeting”. Sure, if fleeting means “years”. Or in this case as long as Biden can keep from croaking in the White House.

No wonder Democrats are leaving The Party of Lynching of Negroes in droves. We reported this not long ago:

It’s no surprise that NYC Democrats are leaving the Democrat Party behind in favor of joining the Republican Party. Fox News reports:

According to a Fox News analysis of AP election results, President Trump gained nearly 200,000 votes from New York City residents in 2020 compared to 2016: a 4.6% boost. Democrats lost 3% of voters for Biden compared to Clinton’s count in 2016. The biggest shifts came from the Bronx, Queens and Brooklyn, which were the hardest hit by COVID.