Recently, there has been a flood of memes suggesting that people who consider alternative treatments and scrutinize the WuFlu vaccine are stupid.

Most of them say something like this: You aren’t capable of taking care of your kid’s math homework, yet all of the sudden you’re an expert in the areas of immunology and vaccines?

Leftists love to fall back on this kind of thinking. Just look at their attitudes regarding global warming and the climate change farce, gender, when life actually begins, who should be able to kill their babies, racism and women’s rights. The list could go on. 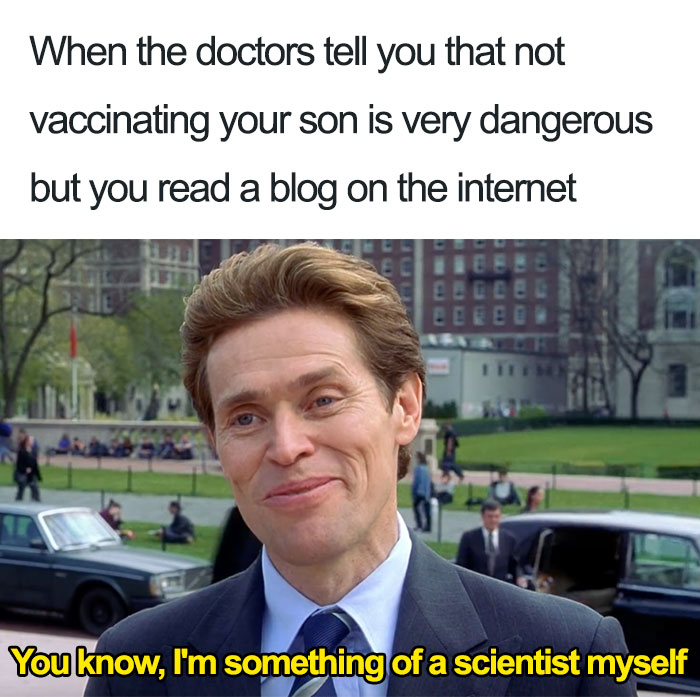 However, leftists didn’t consider the many flaws connected to their meme parade.

First, the people making these memes are no more qualified that you or me when it comes to virology and immunology. Yet, these high and mighty chastisers base their beliefs on so-called experts, but no one really checks into these “experts.” So, what makes their opinions any better that the opinions being mocked? These morally upright people make it sound like the lowly “science deniers” (the preferred term for their objects of disdain) either get their facts from questionable sources, or simply fabricate them.

So, how do we define science, exactly?

The word was first used in in 14th century French and was derived from the Latin scientia, which means knowledge. Basically a scientist was someone with knowledge. In the middle ages, the Catholic church developed the scientific method, which is based on the concept of asking questions and testing your assumptions. Prior to this, facts weren’t questioned. They were blindly accepted.

Developing knowledge prior to the scientific method went like this:

“I’ve got an idea, and it makes sense, so it must be true.” Here’s an example: “People that fall into rivers sometimes get sick and die. Therefore, too much water will cause you to get sick and die. So you shouldn’t take baths, or you will die.”

This would now be considered a logical fallacy. False Cause, to be specific.

Let’s get something clear. No one actually denies science. No one has a problem with scientists in general. That would be like denying that music and musicians exist. The problem is with some of the conclusions that some scientists have made, and the actions that have resulted from some of those conclusions. To continue the music metaphor, some people don’t like certain songs or types of music. That doesn’t make them music deniers. Arguing that science has given us many great things doesn’t address the issue at all. The problem isn’t with science, and the problem isn’t with scientists either. The problem is with the people that incorrectly use the word science as a way to shut down debate.

For some reason, the morally and scientifically superior can’t fathom the idea that there might be scientists that don’t agree with their experts of choice. They can’t believe that there are experts that are just as qualified as anybody that they, the scientifically superior, listen to. Heck, these alternate scientists are possibly even more qualified!

Now, these scientists, who are just as qualified as the chosen scientists, are disparaged. Banned from social media, or at the very least, “fact checked” by people who aren’t experts.

So, this leads to an important question. Which scientist is right, and how do you know? Both groups have the same credentials, same experience, but one believes A and another believes B. How do you know? This is a rhetorical question, as it could be either in any given circumstance, so the only thing that can be done is to listen to both sides and follow the more compelling case. It’s called evaluating the debate, and drawing your own conclusions. There will be people that disagree with you, and that’s ok. It’s also possible that neither scientist is correct, or that both have elements of truth and error.

Unfortunately most people don’t make an informed decision, and ironically, these people are usually the ones spouting terms like “science denier.”

Science is treated as dogma.

You aren’t allowed to question it. But scientists are not religious leaders, and science is not finalized truth. The expression “Believe Science” is foolish; another way to say it is “Don’t question science,” which completely destroys the concept of science. Questioning the results of science IS science. That’s how it works- it’s built into the scientific method. But more to the point, “Believe Science” is an overarching statement. We’re told to trust ALL science because we aren’t scientists. But as mentioned earlier, not all scientists agree. If you accept all science, you’re accepting opposing views. When you’re called a ‘science denier,’ it implies that you reject all science as well. Including concepts such as gravity, the need to eat, photosynthesis, or that water freezes… Of course, rejecting these ideas is ridiculous. Yet it points out that anyone can reject one scientific principle and embrace another.

Unfortunately, people use the terms “questioning science,” not because they care about science at all, but because they are using it as a way to ridicule and demean people with opposite opinions. Science should never be completely rejected, nor should it be used to demean other people. Yet, leftism creates a world where questioning scientific results is now heresy.

Naturally, I can’t help but spot the leftist hypocrisy here. I’m reminded of that famous blue dress that was covered with even more famous DNA. Leftists were glad to pretend the DNA was a scientific mistake. Yet, they can’t admit the WuFlu is riddled with faulty science. From death and disease data to vaccine effectiveness, the truth is always hidden.

However, if science was never questioned, nothing would ever change.

Scientists are human, and capable of both bias and the ability to overlook something or ask the wrong questions. The area of nutrition is loaded with examples of this.

There was a study done to see if eating fish was beneficial. Two sets of people were compared. The first set ate fish about once a week. The second set ate it every day. The health benefits were compared, and one group didn’t seem to be any better than the other.

However this conclusion was questioned, resulting in a second study that changed the parameters. They compared people that ate fish once a week and compared them to people that almost never ate fish. In this case the results were vastly different.

So what would have happened if the first results were just accepted? In other words, the simple act of questioning science creates actual science. And if your questions leave you doubting the WuFlu or the death poke that promises to prevent it, don’t be discouraged. Because your critical thinking skills are exactly what this world needs. A thinker, not another puppet on the strings of leftism.