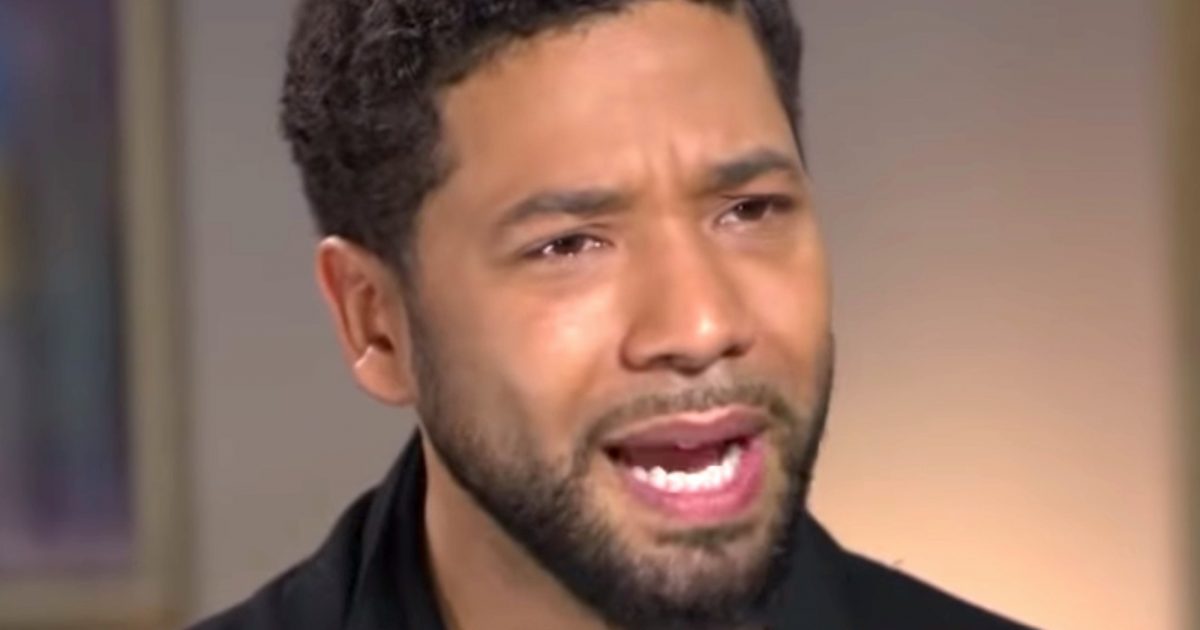 In case you’re wondering how long justice takes. For half-black scumbags, about three years. Oh if Jussie Smollett had only been (1) all white or (2) a Clinton.

Recall that about three years ago Smollett staged his own terror attack, blaming “a couple of white men.” Smollett added to his claim at the time–making the two men who supposedly attacked him near his Chicago home two “Trump supporters.”

In typical Leftist (and gay) fashion, Smollett continued his embellishing the story to Herculean proportions.

For example, when first discovered, Smollett lay with a noose fashioned around his neck. The clear implication framed Smollett’s “attack” as a hate crime. Because a plain old fashioned holdup wouldn’t garner enough attention to get him a raise. I’m shocked that the noose wasn’t made from rainbow-colored rope, a detail he apparently overlooked. Still, the story got better.

We learned as well that the perpetrators poured bleach on Smollett, likely to bleach away his blackness.

The holes were too hard to fill. Ultimately, Smollett became suspect #1 in his attack. It took less than a month.

Surprisingly, the investigation didn’t dump all the details in a speedy fashion. Even more surprising is how long it’s taken to get Smollett to trial.

Amazing. Smollett brought his “attackers” on a dry run the day before the fake hate crime, and it’s on video. pic.twitter.com/vsBQeldtSZ

The bureaucracy of blackness, I suspect. Because if Donald Trump, Jr. perpetrated this nonsense, he would have served his full sentence by now and still might sport an ankle monitor.

Jury selection is over and testimony is under way. If things go as planned, they expect to wrap that aspect of the trial up before the end of the week.

Smollett faces six charges of felony disorderly conduct. With up to three years per charge, Smollett could face 18 years in prison. And the two men who actually helped Smollett with his lie are on full display.

During opening statements on Monday, Smollett’s defense attorney insisted he really was the victim of an attack perpetrated by brothers Ola and Abel Osundairo, and claimed police made a “rush to judgment” in accusing Smollett of orchestrating a hoax.

But Chicago Police Detective Michael Theis, a lead investigator in the case who was the first person called to the witness stand in Smollett’s trial, disputed there was any rush to judgment in the case.

Theis walked the jury through exactly how Smollett went from victim to suspect. He said 24 to 26 officers were dedicated to solving the crime Smollett reported, working at it for more than 3,000 hours combined, and reviewing at least 1,500 hours of surveillance video.

“This was horrible. The crime was a hate crime. There was a noose. There was bleach,” Detective Theis testified. “The mayor on down – everybody wanted answers. They wanted to know what happened.”

Police were looking for two men seen in a grainy video as the possible suspects, but detectives did not know who those men were. Then came a major break in the case. Brothers Abel and Ola Osundairo were identified from a rideshare video they took the night of the attack.

Smollett went on national TV and said he was positive the men in the surveillance video were his attackers. Detectives thought they had solved the case.

Once in custody, the brothers told investigators it was all a hoax. Police then spent days trying to determine if the brothers’ story added up.

“At the end of the investigation, we determined the alleged hate crime was actually a staged event – and the hate crime did not occur,” Theis said.

From the rope the brothers purchased at the Crafty Beaver – a hardware store near their family home – to the red hats and ski masks purchased with A $100 bill that Smollett allegedly gave them to buy the supplies, to video of Smollett’s car supposedly doing a dry run of the attack, detective Theis said the evidence showed that Smollett orchestrated the attack.

Meanwhile, for the first time in the case, it was revealed that Smollett allegedly texted one of the Osundairo brothers while in custody: “Brother…I love you. I stand with you. I know 100% you and your brother did nothing wrong and never would. I am making this statement so everyone else knows they will not get away with this.”

Detective Theis was asked by prosecutors, “To this day, has [Smollett] ever come clean about this hate crime that you are aware of?”

Of course Smollett won’t man up and take his lumps.

But let’s see if juries continue to get things right as they did with Rittenhouse and Arberry. Because if justice serves, Smollett should do some time. And hopefully he is made to apologize to Trump supporters as part of his sentence.

Then again, he might pull the “black privilege” card. Let’s see what happens.

I do know one thing that won’t happen. All the Leftists who supported Smollett and chastised America will be quieter than a mouse pissing on cotton. As will the media.

March For Life 2022: Praying For A ‘Culture Of Life’ To Be Restored 49 Years After Roe v. Wade
Clash Daily