Ghislaine Maxwell has permeated world news as we witness her being convicted of 5 out of 6 counts for procuring young girls to be abused by Jeffrey Epstein and his elite cabal of truly horrible people.

Include Maxwell herself. She too, abused the girls after she manipulated them into sex slavery, some as young as 14 years old.

Ghislaine is the youngest of nine children and the favorite of her media mogul father, Robert Maxwell. At the time of his death, he was in debt of 500 million dollars where he’d stolen employee pension funds to bail out his other businesses. Apparent Ponzi scheme. Reports that he possibly worked for the British, Israeli, and Russian Secret Services abound. He died after supposedly falling off his yacht, ironically named Lady Ghislaine.

By all accounts, it was a suspicious death. Speculation swirled that he committed suicide because there was no way out of his debt, or that he was assassinated. Either is plausible.

Ghislaine was good friends with Prince Andrew while they attended University together. When she was dating Epstein, she introduced him to the Prince. Bet Andrew rues the day of that introduction. He’s in a heap of trouble because of it.

In 2002, Maxwell and Kevin Spacey posed for pictures on the Queen’s throne in Buckingham Palace in a private tour arranged by the Prince. All three of these people were seemingly involved in a lot of the same stuff – bad stuff, like raping children and underage sexual abuse. 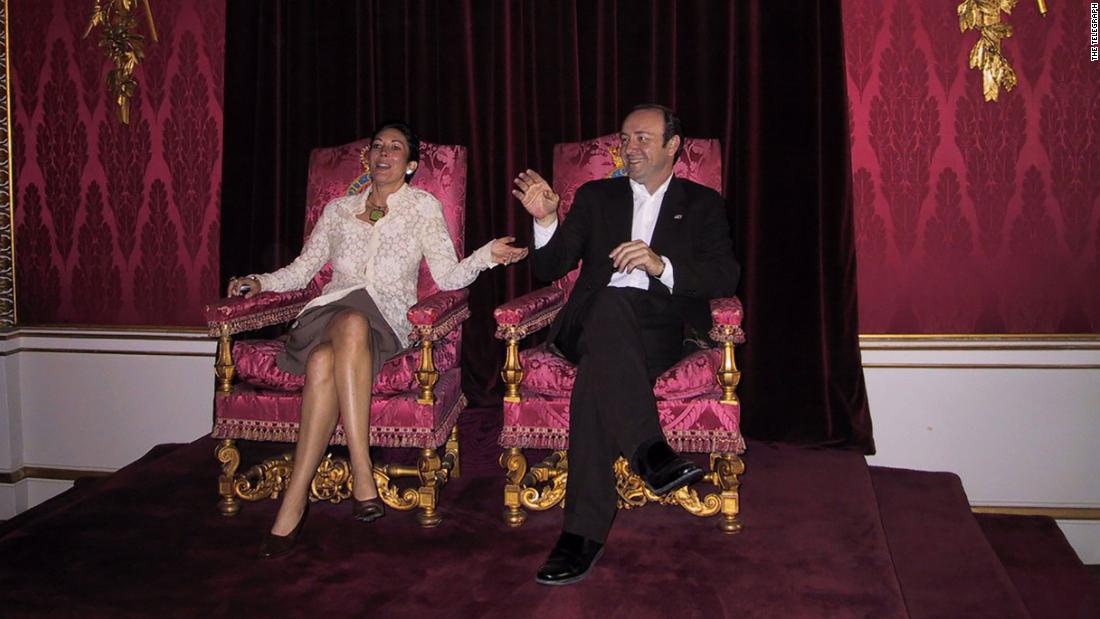 It’s been confirmed by Epstein’s pilot that Spacey was on the Lolita Express as well.
Ahh – the company they keep. Kevin Spacey has been accused of molesting several young males on his movie sets. Odd, how these people seem to stick together. Bad begets bad, evil begets evil.

Interesting how they all seem to have the same proclivities. Maxwell’s conviction is an indicator of what’s to come for Prince Andrew. He should be scared and so should the Monarchy.

The prince has consistently denied the allegations, including in an infamous 2019 interview in which one of his defences was a claim he cannot sweat.

An American judge is currently deciding whether a civil case brought by Giuffre against the Duke in New York should go ahead. Prince Andrew’s lawyers argue he can’t be tried as he is covered by a deal made in 2009 between Epstein and Giuffre.

The deal, released publicly earlier this month, shows that Giuffre was paid US$500,000 by the now-dead sex offender Epstein to end a claim for damages. She also agreed not to bring any cases against other “potential defendants”; whether that applies to Prince Andrew, who is not named in the deal, is what is in question. -Newshub

His lawyers are trying to stave off the civil lawsuit on the flimsiest of Hail Mary’s because Epstein paid Virginia Giuffre 500,000 dollars for an umbrella policy of sorts, where she couldn’t sue anyone. Prince Andrew is praying this will include him too. His lawyers seem to only have the slimmest of options, and this one may not play out.

But isn’t this sort of an admission? Why use this legal maneuver if you’ve denied the accusations? Curious.

Giuffre has brought a civil suit against Prince Andrew for his sexual abuse of her as an underage 17-year-old. He has denied the charges. But civil suits are different – there only has to be a preponderance of the evidence as opposed to beyond a reasonable doubt for deciding the fate in a criminal case, such as Maxwell’s. Andrew may not come out of this well. Repercussions from his actions and the infamous picture of Andrew with his arm around the waist of the 17-year-old may cement his fate.

Ghislaine Maxwell’s guilty verdict may spell trouble for Prince Andrew, who is fighting a civil suit brought by Virginia Giuffre in the same New York City courthouse where the British socialite was convicted Wednesday.

Giuffre’s suit alleges that she was 17 when Queen Elizabeth II’s middle son sexually assaulted her on three occasions in New York and abroad at the direction of late financier Jeffrey Epstein and Maxwell.

In November 2019, Prince Andrew was removed from Royal duties because of his questionable relationship with Jeffrey Epstein along with the civil suit against him by Giuffre. As the scandal gains steam, The Duke of York acknowledges it’s become a “major distraction” for the Monarchy.

But like any family, the Royal’s are no different with their hushed secrets. Theirs may be grander, to be sure. It remains to be seen if Andrew is the careless Royal that brings the House of Windsor down. But even more curious is the Royal Family’s sinister associations with, and around people that partake in this type of elite sex trafficking and abuse of minors.

The Company You Keep.

Prince Charles has also had some very strange relationships that include the likes of Jimmy Savile. A DJ, radio, and television personality, this oddball manipulated his way into the palace and became a confidante of Charles, often inserting himself as moderator into Charles and Diana’s marriage. Diana disliked him immediately. It was reported, he gave off a very “creepy vibe” that she felt instinctive. Charles – not so much.

Jimmy Savile, was an accused sexual predator with a proclivity for necrophilia as well.

In June 2014, The Guardian did an article on Savile’s debauchery entitled:
Savile told hospital staff he performed sex acts on corpses in Leeds mortuary
According to the Mirror:

Following his death, 214 crimes against Savile were recorded by 28 different police forces. The NSPCC puts the number of reports of sexual abuse relating to Savile at 500.

Prince Charles had a friend that was a confidante and was allowed into the palace that was accused of such evil against children?

The heir to the throne was also linked, by friendship, to Bishop Peter Ball, who was jailed in 2015 for the sexual abuse of 18 young men. This was over a span of 30 years.

Bishop Ball attended the wedding of Camila and Charles and did a reading at the funeral of the Duchess’s father. The first victim to come forward was Nick Todd, who was shamelessly slandered as a liar for years. It was speculated that the friendship between Charles and the Bishop shielded him from prosecution, which the Prince vehemently denies. As the case was reopened, Todd took his own life because he couldn’t handle it going to trial again. He was 38 when he died.

Charles denies any knowledge of Bishop Ball’s abuse. But could the Prince really be that obtuse, especially when he was friends with Savile? Diana, hardly as worldly as Charles, picked up on his sinister vibe immediately.

These are people the Royal Family have been chummy with. It’s hard to imagine that the Monarchy could be involved in such malevolent behavior, but maybe the cracks in the mortar are starting to grow and the protected secrets are being revealed. It would be horrific to find out the Monarchy was involved in a more constructed child sex trafficking enterprise.

What psychosis would make an adult female hurt young girls in the name of love?

Most people are witnessing the unraveling of secrets from the Epstein horror club and left questioning how Ghislaine could do something so diabolical. What hold did Epstein have over her? They dated and were in love.

In Megyn Kelly’s podcast #228 with Barry Levine, author of “The Spider,” he describes in detail the relationship and the secrets from his extensive research into Jeffrey Epstein.

Ghislaine told a friend that she could not satisfy Epstein’s sexual appetite so started to procure young girls for him. Dr. Darrel Turner, a forensic psychologist described for the court in Maxwell’s case, what predatory behavior looks like and how it is achieved.

He described how the initial grooming of the victim starts with isolation. The goal is to distance them from their normal social circles of friends and family and introduce them to other victims and offenders in an effort to normalize their sexual behavior.

Several of the girls said Maxwell had them undress and she touched their breasts. They were taught how to give Epstein massages the way he liked them, ultimately ending up with sexual activity. It was a calculated manipulation of her victims to make them feel that sexual activity between adults and children was normal and ok.

Read that again: to make them feel that sexual activity between adults and children was normal and ok.

According to Levine, the girls were encouraged to bring in other girls which they were paid several hundred dollars for the “referrals.” Maxwell used scare tactics, telling the girls they would be blamed, and actually be in more trouble for bringing in other girls.

The girls were shown child pornography to again send the subliminal message that what they were partaking in was ok. The girls told the court that they didn’t tell anyone because they believed they were in a loving relationship; that Maxwell cared about them. Which is all part of the psyops that these cruel, diabolical predators utilized to keep these young girls in line, obedient and compliant.

Checkmate – you achieved your goal Ghislaine, you sick, unhinged pervert.

But how did Ghislaine Maxwell become this person? A horrid predator of young girls. How did she get to the mindset to abuse these kids? What hold did Jeffrey Epstein have over her that she would torture children into sex slavery and where they would carry that emotional torture for life, even when removed from the situation?

The human spirit is amazing in what it can overcome, but these kids were horrifically robbed in so many ways and on so many levels.

Motive is always at the root of criminal cases when deciding someone’s fate. There is unequivocal proof that Ghislaine Maxwell plotted and manipulated young girls for the sole purpose of being Jeffrey Epstein’s partner. Maybe she was driven by love, but let’s be honest, maybe she’s just an evil person.

Keep an eye out for Sarah Kellen. She was a former assistant to Jeffrey Epstein and her name surfaced during Maxwell’s trial. Apparently, she too arranged for girls to be sexually molested by the boss.

Maxwell’s court case introduced a victim referred to as “Jane,” during the trial. She said Epstein started abusing her when she was just 14 while Ghislaine watched.

What emotional and mental deficits could bring these people to either partake in this or be friends with those that hurt children? I hope Maxwell sings but then she deserves to be hanged. It’s probable that Prince Andrew is guilty. If so, he needs to be held accountable and so does the Monarchy. It’s highly unlikely that Prince Charles didn’t know that Saville and Bishop Bell were bad players. Every instinct and red flag was raised with Diana upon meeting Saville. The guy was a predator and “did” dead people.

Really? The next King of England didn’t have a sixth sense about these two? No tangible intuition – no heightened awareness?

God help England. God help the children. Or should I say God help us all?!