Just like voter fraud, Leftists don’t want the real numbers about Blacks killed by police examined. Because the facts would reveal bad news for Leftists.

Just like Trump crushed Captain Demento in the 2020 Presidential election, Blacks are not “hunted” by police. But you will never see either of these two topics explored truthfully by the Left. Add them to the litany of nonsense spewed by Leftists that they can’t defend with facts.

So when almost any Black is killed by a cop, America must burn. But when we do examine the facts, we discover the truth. Leftists incite anger in Blacks over lies. Then those same Leftist profit from the lies; like the empirically refuted lie of the “epidemic of racist police killings.”

A new survey commissioned by Skeptic Research Center reveals the extent to which the public is misinformed on the issue of police violence. Participants across the political spectrum in the nationally representative survey were asked how many unarmed black men were killed by police in 2019. The results were revealing. Overall, nearly half of surveyed liberals (44 percent) estimated roughly between 1,000 and 10,000 unarmed black men were killed whereas 20 percent of conservatives estimated the same.

Most notably, the majority of respondents in each political category believed that police killed unarmed black men at an exponentially higher rate than in reality. Over 80 percent of liberals guessed at least 100 unarmed black men were killed compared to 66 percent of moderates and 54 percent of conservatives. But, according to a close database compiled by Mapping Police Violence, the actual number of black men killed by the police in 2019 is 27. 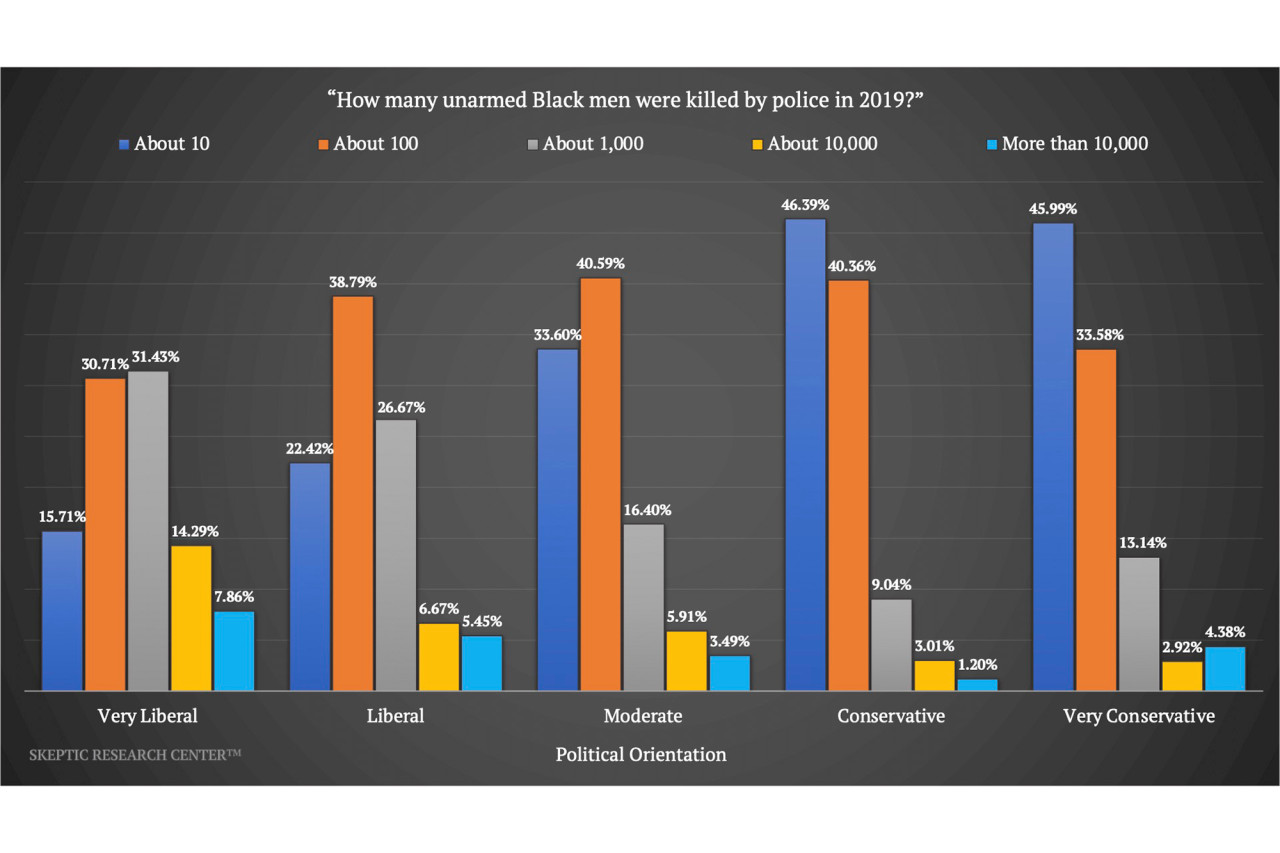 Look at the chart and you see something very profound.

Do you still wonder why you often can’t have a reasonable discussion with Leftists? They come with grossly distorted ideas, and don’t want to know the REAL facts.

Understand that if more than 10,000 blacks were being killed by cops, that would be a real problem. However in 2019, 27 unarmed Blacks were killed by cops. I dare you to ask the average Leftists how they view Black Lives Matter knowing these facts.

This subject is more interesting when you consider how many Blacks kill other Blacks. Because those numbers are closer to the perception Leftists have of cops killing Blacks. So why no outcry on Black-on-Black crime?