Joe “Demento” Biden is toast. Conservatives know it, the Left knows it, even the world knows it.

I would go into Biden’s poll numbers, but I want to discuss that separately in another article. Just know that Biden’s poll numbers are dismally LOW! But as I warn Leftists all the time on my award-winning radio show, Biden hasn’t reached rock bottom yet!

Painfully, the fake news media continues to do all it can to pump up Biden. They maintain some feeble attempt to make people believe that he got 81 million votes in the stolen election.

Anyone watching the media rush to defend President Biden’s weirdness in Warsaw is getting a free tutorial on the corrupt relationship between the press and this White House. The handmaidens’ mad dash to protect him from an avalanche of deserved criticism also helps explain why Biden’s presidency is a flop with voters.

Put another way, Russia is a sh*t-show in which the “Big Guy” plays the part of the sh*t.

None of the apologists could top Daily Beast columnist David Rothkopf, who suggested Biden surpassed JFK’s “Ich bin ein Berliner” speech and Ronald Reagan’s “Mr. Gorbachev, tear down this wall” address. He found the remarks so stirring, they reminded him of Winston Churchill’s remarkable “Iron Curtain” speech in Fulton, Mo., in 1946 that warned of the emerging Cold War with the Soviet Union.

Rothkopf, while conceding the White House walk-back on regime change, still saw virtue in what he called a “moment of clarity from the plain-spoken president” that “elevated his speech. It made it clear that Biden’s passion was deeply felt and real.”

Apparently seeing such unexpected praise as too good to resist, the White House suddenly shifted gears overnight and grabbed it like a drowning man grabs a life raft.

Now it, too, saw only virtue in Biden’s on-the-fly addition, and the president on Monday made an appearance to defend the very remarks his aides had disavowed Saturday.

But this won’t last. And the cracks in the armor already show.

The press is now forced to report on Biden’s misadventures. And for one simple reason: the foreign press reports on Biden.

I Googled, “world mocks Biden” and this is what came up. 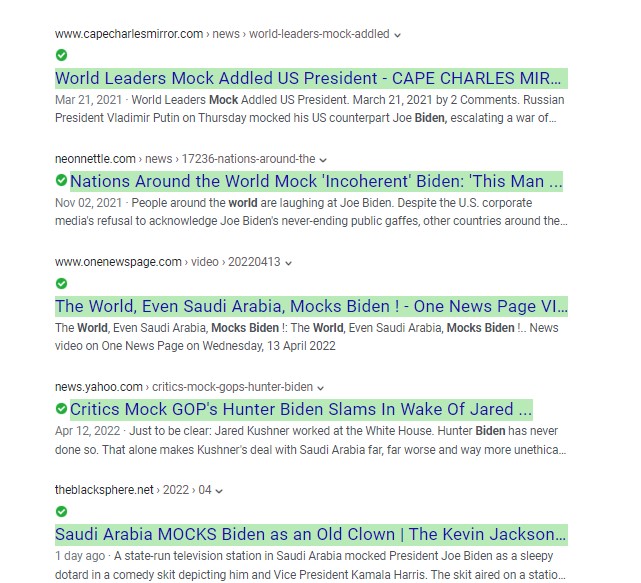 Biden has been mocked for quite some time. Google the information for yourself.

But then click on a couple of the articles from last year. Terms like “incoherent” used to describe Biden. Because the world recognized Biden for what he was: an installed puppet of a president. They wondered how the United States of America succumbed to the Left and allowed an election to be stolen. Worse, they installed a braindead moron as president.

And while this search yielded what we already know about Biden, what is most surprising to me is that one of my posts actually appears in the Google search.

My team isn’t jumping for joy about seeing our post. However, it may signal that social media knows that it has gone too far.