Whoopi Goldberg recently weighed in on the controversy of the Archbishop of San Francisco denying communion to Nancy Pelosi.

On “The View”, Ms. Goldberg stated something that needs to be addressed. She stated that the Bishop isn’t allowed to do this.

To be exact, Whoopi said; “This is not your job, dude. That is not up to you to make that decision.” Her ignorance is so startling, it actually teaches us a lesson. One that we really should know quite well by now! Pretending to be an expert on TV doesn’t actually make you one.

It’s like those commercials, where all the TV doctors walk around and say “just because I play a doctor on TV doesn’t mean I am one.” Whoopi played a nun. Not once, not twice, but three times! Still, that doesn’t even come close to making her an expert on Canon Law. Yes, Law.

The Holiness of Communion

The Catholic Church takes communion very seriously, as we believe it’s literally the Body, Blood, Soul and Divinity of Jesus. We aren’t allowed to eat an hour before we receive. We aren’t allowed to receive if we commit any particularly bad sins until we go to confession. So yeah, we’re a little concerned when someone is receiving unworthily.

It’s mentioned in the Bible as well.

So then, whoever eats the bread or drinks the cup of the Lord in an unworthy manner will be guilty of sinning against the body and blood of the Lord.

But it’s actually worse in this case because of a little something called “scandal.” There are two main documents outside of the Bible pertaining to being a Catholic.

First, there is the Catechism of the Catholic Church, which is like an instruction manual.

It gives clarification on what the Catholic Church actually believes. Here’s what it has to say about scandal.

2284- Scandal is an attitude or behavior which leads another to do evil. The person who gives scandal becomes his neighbor’s tempter. He damages virtue and integrity; he may even draw his brother into spiritual death. Scandal is a grave offense if by deed or omission another is deliberately led into a grave offense.

2285- Scandal takes on a particular gravity by reason of the authority of those who cause it or the weakness of those who are scandalized. It prompted our Lord to utter this curse: “Whoever causes one of these little ones who believe in me to sin, it would be better for him to have a great millstone fastened round his neck and to be drowned in the depth of the sea.” Scandal is grave when given by those who by nature or office are obliged to teach and educate others. Jesus reproaches the scribes and Pharisees on this account: he likens them to wolves in sheep’s clothing.

Aside from the Catechism of the Catholic Church, we have Canon Law.

These are basically the rules and bylaws of the Church. In the Canon Law of the Catholic Church it says this:

Can. 915 Those who have been excommunicated or interdicted after the imposition or declaration of the penalty and others obstinately persevering in manifest grave sin are not to be admitted to holy communion.

Can. 916 A person who is conscious of grave sin is not to celebrate Mass or receive the body of the Lord without previous sacramental confession unless there is a grave reason and there is no opportunity to confess; in this case the person is to remember the obligation to make an act of perfect contrition which includes the resolution of confessing as soon as possible.

So we’ve established that this behavior is frowned upon- but what about the Archbishop? Does he have the right to say anything?

Canon 838.1 — The supervision of the sacred liturgy depends solely on the authority of the Church which resides in the Apostolic See and, in accord with the law, the diocesan bishop.

So, yes, Archbishop Cordileone is both right, and has the authority to deny communion. Of course, don’t take my word for it. I always welcome a second opinion.

.@WhoopiGoldberg’s attacks on church *disgusts* me. Thou shall not kill’ is a commandment & @Pontifex said ‘abortion is murder’. @SpeakerPelosi promotes & supports abortion.

The Archbishop involved himself in matters of the church not politics. Stop attacking the church‼️

When did we elect Whoopi Goldberg Pope of the Catholic Church ? But listen up jackass … An Archbishop does have the right to tell Catholic in name only, Pelosi .. no Communion .. It’s his job to protect the sacraments .. So you were saying Whoopi ?

It is PRECISELY the Archbishop’s job to ban those who defy the Church from receiving the Eucharist. In fact, per the Rules and Laws of the Catholic Church, not even the Pope may overrule him on the matter. The Archbishop – as Ordinary of his Archdiocese – is the sole authority.

I could go on, but I think you get my drift.

If you’re looking for a ruling on morality, consult your closest Bible, and then do a little independent thinking. And whatever you do, don’t go looking for Hollywood to give you an expert opinion. Unless of course you’re seeking a gun expert. I hear Alec Baldwin is doing freelance work these days. 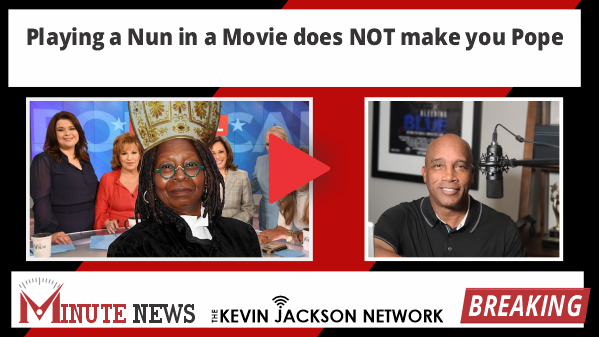