When it comes to Ghislaine Maxwell, I find myself shaking my head every single time I see her name.

Now, I can’t decide what’s really going on, but I will tell you one thing. It stinks like five day old fish in a dumpster in the Texas heat (which happens to be 104° at the time of this writing.) If that doesn’t give you a feel for how suspicious this is, nothing will.

My attention was drawn to headlines claiming Ghislaine Maxwell is suicidal. Or, to be specific, that she is on suicide watch. Generally, the only way to land yourself on suicide watch is to be actually suicidal. But, her lawyer quickly tells us that Maxwell is, in fact, NOT suicidal. That’s where it all starts to smell bad. And I have my theories of where this will lead us.

First of all, it’s too late for Romeo and Juliet!

If Maxwell had been suicidal when Epstein “killed himself,” or in that same timeframe, then perhaps a Romeo and Juliet scheme might be fathomable. I mean, if my boyfriend/boss, ran a sex-trafficking ring in which I was a key player, up and killed himself right as we were brought down by law enforcement, I’d be pretty depressed. Especially when I realized I was holding the bag. “These violent delights have violent ends,” as Shakespeare once said. And in the American justice system, somebody’s got to pay for that.

But Maxwell pressed on. Perhaps believing she could somehow beat the wrap. But the trial didn’t go quite as planned. And in December of 2021, exactly six months ago, the jury said the fateful word: GUILTY. I’m always amused when criminals are surprised by these verdicts. But this case is especially amusing. Because according to Maxwell’s attorney, this suicide watch is making it hard for Maxwell to prepare for sentencing.

[Maxwell] is due to be sentenced on June 28 and prosecutors have requested she spend a minimum of 30 years in prison.

But Maxwell’s attorney, Bobbi Sternheim, submitted a letter to US District Judge Alison Nathan on Saturday stating that she would seek to postpone Maxwell’s sentencing if her client remains on suicide watch.

Maxwell “is not suicidal,” Sternheim emphasized in the letter. She said staff at the Metropolitan Detention Center in Brooklyn, New York, placed her client on suicide watch on Friday “without having conducted a psychological evaluation and without justification.”

She added that jail staff provided Maxwell with a few sheets of toilet paper and a “suicide smock,” meaning a large piece of thick, tough fabric that can’t be cut, torn, twisted, or otherwise fashioned into a noose. Sternheim said Maxwell was also not permitted to possess and review legal documents, nor was she even permitted to have paper or a pen.

“This has prevented her from preparing for sentencing,” Sternheim wrote. (Ding, ding, ding!)

Sternheim added that a psychologist evaluated Maxwell Saturday morning and determined Maxwell was not suicidal.

“If Ms. Maxwell remains on suicide watch, is prohibited from reviewing legal materials prior to sentencing, becomes sleep deprived, and is denied sufficient time to meet with and confer with counsel, we will be formally moving on Monday for an adjournment,” Sternheim wrote.

On behalf of every girl in the whole USA, I object.

Actually, Maxwell’s had three years to prepare herself. And a good six months of knowing what’s around the bend. Thus, I contend that a few days with extra eyes on her safety can’t impede her preparation for her sentencing. As my momma would say, “it is what it is.” Get on with it!

Which begs a question I’m sure you’ve already asked yourself. Is this a Clinton-style suicide watch? The kind where someone will “commit suicide” while under watchful eyes?

There are a lot of little Clinton factors to consider.

Starting with the fact that Bill Clinton is also a sexual predator. And you know what they say, “birds of a feather prey together”. These two playboys thought they were above the law. One is now dead, and the other has yet to learn his lesson. Speaking of the dead one, some say it was a particular portrait that cost Epstein his life. Maybe you remember it… 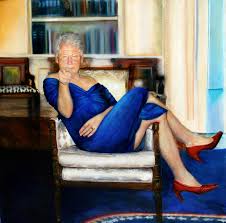 The Tesla and SpaceX founder responded:  “Where is their ‘client’ list? Shouldn’t at least one of them go down?”

Of course they should go down! Millions of people spend hours wondering why Clinton has never been arrested. And his wife is just as guilty of countless crimes. But where are the indictments? And what of this crazy letter Maxwell submitted to the judge last week, claiming her ties with Clinton prove she tried to be a good human being? Talk about a brain-fryer.
Maybe it’s time to revisit some of those Epstein conspiracy theories. Perhaps the playboy really is on a deserted island. One where he will soon be joined by an exotic beauty, even though she is decades older than he likes them.
I’m not sure exactly what is about to happen, but I guarantee you someone will pop up dead. Because this business with Ghislaine Maxwell isn’t over yet. She may try to fake her death, or someone might kill her before she can tell exactly what she really knows.
Facebook Twitter
Tiffany LayneJune 26, 2022
4 minutes read
Don’t Miss Out!