Wouldn’t it be ironic for Joe Biden’s newly supercharged IRS to target him? Because Joe Biden has some explaining to do.

Where did Joe Biden come up with the mysterious $5.2 million to pay Hunter Biden’s legal bills? You can bet Democrats are scrambling to cook the books and show how Biden had $5.2 million in a box. In fact, it was probably in Hillary Clinton’s basement bathroom closet. Then again, if you can create 81 million fraudulent votes out of thin air, what’s a few million dollars?

You may remember a little nugget of gold Biden’s laptop revealed a few months ago. It’s like the gift that keeps on giving. The Daily Mail analyzed the laptop and from that there were some big takeaways. For example, we learned that financial records show Biden magically had $5.2M in unexplained income that he used to pay his son’s legal bills for one “megabucks Chinese deal” and was tapped as the “big guy” to get a 10% cut of yet another Chinese deal.

The revelation ties the president even closer to Hunter’s overseas business dealings – and makes his previous claims that he never discussed them with his son, even less plausible.

Joe was able to pay the bills after earning millions of dollars through his and his wife’s companies after he left office as vice president.

Some of the wave of cash came from their book deals and speaking engagements.

Some of that difference can be accounted for with salaries earned by First Lady Jill Biden and other sums not required on his reports – but still leaves $5.2million earned by Joe’s company and not listed on his transparency reports.

The ‘missing millions’ – combined with emails on Hunter’s abandoned laptop suggesting Joe would have a 10% share in Hunter’s blockbuster deal with the Chinese – raise a troubling question: did Joe Biden receive money from the foreign venture?

Now, if you ask me, I’m betting there are millions more that Biden is confident he can keep hidden. That’s how crooked mega-rich politicians work. But I digress. 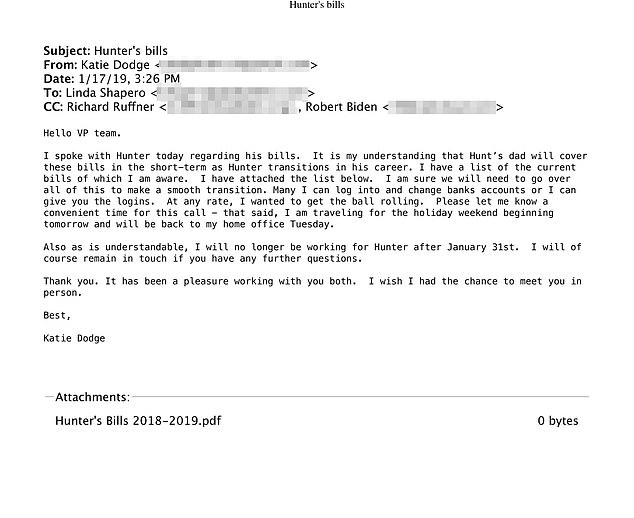 In January 2019, Hunter’s assistant Katie Dodge wrote an email to book-keeper Linda Shapero and Biden aide Richard Ruffner, saying Joe had agreed to pay his hundreds of thousands of dollars of bills.

One of the last items  on a spreadsheet of Hunter’s bills was $28,000 in legal fees for the ‘restructuring’ of Hunter’s joint venture with the Chinese government-controlled Bank of China. The spreadsheet listed the bill as ‘Faegre Baker Daniels: BHR Restructuring’ costing $28,382 and due ‘ASAP’.

In January 2019, Hunter’s assistant Katie Dodge wrote an email to book-keeper Linda Shapero and Biden aide Richard Ruffner, saying Joe had agreed to pay his hundreds of thousands of dollars of bills.

‘I spoke with Hunter today regarding his bills. It is my understanding that Hunt’s dad will cover these bills in the short-term as Hunter transitions in his career,’ Dodge said.

The assistant attached a spreadsheet of bills with the email, totaling $737,130.61.

One of the last items was $28,000 in legal fees for the ‘restructuring’ of Hunter’s joint venture with the government-controlled Bank of China.

The spreadsheet listed the bill as ‘Faegre Baker Daniels: BHR Restructuring’ costing $28,382 and due ‘ASAP’.

BHR (‘Bohai Harvest RST’) is a private equity firm and one of Hunter’s two major Chinese business ventures. The joint venture was co-owned by the state-controlled Bank of China.

The same year Joe took on these bills from Hunter, he promised that ‘No one in my family will have an office in the White House, will sit in on meetings as if they are a cabinet member, will, in fact, have any business relationship with anyone that relates to a foreign corporation or a foreign country.’

Yet not only did Hunter hold on to his 10% share of BHR through 2021, confirmed by White House press secretary Jen Psaki last February, the emails also indicate Joe knew about it, and even agreed to pay Hunter’s legal fees for the firm.

The New York Times reported earlier this month that Hunter had taken out a million-dollar loan to pay his delinquent tax bill in an apparent effort to stave off an alleged tax fraud prosecution.

‘When will the corporate media start doing their job and ask President Biden these questions?’ he said. ‘And when will President Biden start being honest with the public? The American people deserve the truth.’

Iowa Republican Grassley told DailyMail.com: ‘Evidence of the president’s financial and business connections to Hunter continues to grow. It’s imperative for the first family to show the American people the transparency that they deserve.’

Now remember, when Jen Psaki was still Biden’s mouthpiece, she claimed the president had no knowledge of his son’s business dealings.

Of course, if I gave one of my son’s $5M to pay some bills, he’d have some real explaining to do! I’d want to know every hooker and drug dealer getting paid off. Along with any shady business deals. But I will admit that Joe Biden doesn’t subscribe to the typical style of parenting- showers with daughter included!

The president’s son is under federal investigation for tax offenses, money laundering and illegal lobbying for foreign clients.

While in office Joe had a relatively modest income, but he enjoyed a flood of millions of dollars soon after he left office, much of which came from his memoir book deal and eye-watering speaking fees.

Between 2017 and 2019 he and First Lady Jill Biden reported $16.5million in gross income on their federal tax returns, released by the Biden campaign.

The vast majority came from their two companies, CelticCapri Corp and Giacoppa Corp, which they use for speaking and writing engagements.

But in Office of Government Ethics (OGE) fillings for the same period, Joe only reported $9.6million in income for himself and his wife.

I have to wonder just how many more treasures will come to light now that these hard drives are out there for the world to see? I mean, we all speculated before, but now there is bonified, verified, indisputable truth. How do leftists continue to tell their lies in light of all this evidence? And when will someone have balls enough to shut the Biden’s down once and for all?

It’s been four months since we first learned of these shady dealings. Had it been Trump, impeachment would already be under way. Which is why it would be so satisfying to see Biden’s IRS be the ones to shut him down. I mean, the Border Patrol isn’t getting an influx of officers. Nor is ICE. Or how about the Department of Homeland Security? Nah, catch the conservatives is the only game Biden wants to play. So stay tuned America, this might be a long road, but good things come to those who wait.