Leftists love their euphemisms, and SADS works out perfectly when you don’t want to admit that people died from a big Covid lie.

In this case, the lie of the vaccines. With everything we now know about vaccine deaths and vaccine injuries, no one should be surprised that Moderna, Pfizer, and their financial enablers wanted the data about deaths and injuries hidden for 75 years.

The recent heart attack suffered by Damar Hamblin illuminated the need for investigation in this mess. While Leftists scumbags promoted these death pokes as “safe and effective”, others sounded the alarm bell.

Green Bay Quarterback Aaron Rogers spoke out against vaccinations. In light of what happened to Hamblin, you can bet that he feels vindicated. However, there are many examples of great athletes who suffered mightily after getting the jab.

Little coverage was given to 38-year-old pro-vax ex-Baltimore Raven Uche Nwaneri. The former offensive lineman collapsed in the bedroom of his wife’s home in West Lafayette, and he never recovered.

The cause of his collapse was an “enlarged heart with acute heart failure.” Sound familiar?

For those who wonder if his death was Covid-vaccine-related, check out this tweet from Nwaneri:

What kind of idiot must one be to actually take a dewormer ivermectin which has abolutely nothing in any study anywhere about using for Covid, but you’re (sic) stupid ass doesn’t want a vax. I mean natural selection takes over at some point right? 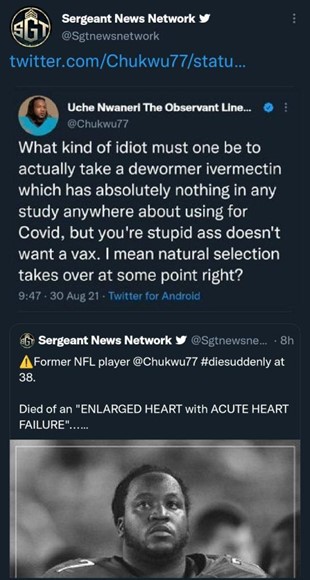 I wonder if his family realizes who the “stupid ass” is now?

The “dewormer” works and the vaccine kills. But don’t expect much media coverage on the death of this outspoken vaxxer. In fact, as I read multiple articles about his untimely SADS death, I saw nothing about his death being related to Covid.

This despite Nwaneri’s obvious mocking of the unvaxxed in his tweet.

What professional athletes do you know who die at the age of 38 and from issues we know to be those from which people die from after taking Covid vaccines? “Enlarged heart with acute heart failure.”

Nwaneri fell for the BS of Anthony Fauci and his boss Joe Biden. His death is on their hands.

As for Hamblin, his NFL career is over. And he too has Fauci, Biden, et al to blame for this.

But how many other non-descript people’s lives have been ruined, all because Leftists don’t have the balls to tell the truth about Covid vaccines?